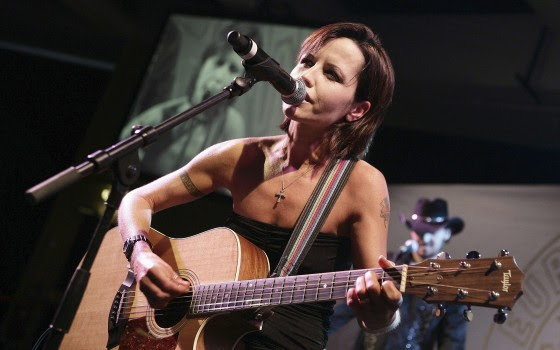 Stars die all the time, you remember where you were when you hear the news, the feelings that generally register are nostalgia, shock, end of an era that kind of thing. It passes. But this doesn’t, this lingers.   Psychologists say after splitting up with a partner, that it takes half the whole time you spent in a relationship to get over it. If that is the case, it’s going to a while for us to get over Dolores O’Riordan.

Take every female stereotype you ever knew in the music world, cast them aside and what you’d be left with was Dolores O’Riordan. Apart from her unique voice and obvious song writing talent, she nailed the delivery. She owned what she did, created it, stood behind it and won the world in the most beautifully honest way that she wore fame as a coat she put on when she felt like wearing it. When she didn’t wear that coat, we read how she was just a mom, confident enough to take the time, when others might have scrambled to make hay. Talent is timeless, and it would be there whenever she came back, and it was, every time. She spent time in Ballybricken with her family, her mom, a proud Limerick girl, she was as normal as she was a brave pioneer of feminist back in the day when we needed it most.

In 1994, I was 18 and Dolores O’Riordan was 23.   The Cranberries had brought out Zombie and it bought out the unwitting feminist in us all. I’m not sure we knew what it was at the time, other than she felt different to Madonna, Kylie and Mariah Carey. She didn’t use her looks to sell. She didn’t use sex to appeal, she didn’t have to, didn’t want to. In those days, she was not mainstream for us, she was rebel and to say you liked the Cranberries was to say you were a bit of a rebel too. Like the music or not, we liked Dolores, like what she stood for, how she presented herself, she wasn’t going to pander to a sex hungry media and turn all offended chick, not this chick, she didn’t pander, she succeeded on her talent, nothing else.

This week in Doha, mourning Dolores, has dredged up a plethora of feelings. I thought it was just me but the more people particularly women I meet its seems her legacy is felt not only by us Irish but by people from all over the world.

So entranced by her music, I never followed her personal life closely and it was this that lead to my uncomfortable encounter with her 18 months ago in JFK Airport. ‘Dolores’ I stammered after her. I should point out at this stage that I have form when it comes to meeting famous people. I get star struck immediately, rabbit headlights kind of thing. Then I get blank forgetting their names etc. Then panic as they walk away, and I face missing my chance. Then I say something, like ‘wait’ to Gabriel Byrne. ‘Oh Hello’ to Jack Nicholson. ‘it’s cold’ to Ed Sheeran.

Dolores O’Riordan turned, perhaps thinking I knew her, when I called her by name. She looked as if I was something that had unwelcomely, attached itself onto her shoe, she turned back and walked away. And that was us. Out of touch with the trivia of Irish news I didn’t know then that she had had an altercation with an Aer Lingus flight attendant and had an issue in general with people hassling her in airports. This explained the Delta choice and the cold shoulder. It never bothered me, I just took it personally, I mean what kind of person approaches somebody in an airport, weeks after they’ve been in court over people annoying them in airports/airplanes? Me, see I told you I had form.

All in all, I never got to say what I wanted to say. Dolores O’Riordan you were an influence when we didn’t know how much we needed it.

All week I waited for the results of the post mortem and then I thought, is it going to change anything? All that matters now, is what lingers.