Your only problem in fact will be working out what to do with all those courgettes, writes Michael Kelly.

THERE WERE MORE than a few points last year when I wondered whether my tomato obsession had led me to bite off more than I could chew. Even with a neighbour of ours helping out with maintenance on the 70 tomato plants, watering duties were still overwhelming at times.

A single tomato plant needs 13 litres of water a week, so watering by hand with a hose could take up to an hour, several times a week. Let’s just say there many a 5am start to try and fit it in.

Not before time I have acquired a seep hose which runs along the ground beside the plants and when turned on, it gently drips water out through a series of holes along its length.

Richard tells me I need to turn on the hose for four hours a week to deliver the requisite amount of water, and Richard being Richard he has almost certainly calculated this with a margin of error of one or two drops.

With the general busyness of life pushing in, there were also points last year when the big tunnel got overrun with weeds, which is never a fun experience. To prevent that happening again, this year I am basically carpeting the polytunnel in mypex – a permeable black membrane beloved of commercial producers that you lay on the soil to prevent weeds.

Growing tomatoes through mypex is thought to reduce the likelihood of blight since there is less evaporation of water in to the air to create those muggy conditions that blight loves. A 50m roll of it costs around €45 but I reckon that’s cheap at the price considering the weeding time it will save me.

With the tomatoes planted out and dealt with for now (have increased the number of plants to 81 this year – I really never learn), it’s time to move onto other things. This week I sowed some of the great summer and autumn fruiters in the potting shed – cucumbers, sweetcorn, courgettes, squashes and pumpkins.

I sow all of these in the same way – sowing one seed per module in a module tray. Given how quickly they grow (and to avoid having to pot them up), it’s a good idea to use a module tray that has large modules so there’s enough compost for them to grow happily for at least a month. They will hang out in the potting shed for about a month before being planted out.

The cucumbers and sweetcorn will be planted out in the polytunnel while the courgettes, squashes and pumpkins will go outside. I generally plant one courgette plant in the polytunnel as well which will produce a slightly earlier crop than the outside plants. This week I will also be sowing peas and the last of my main crop spuds. Busy times for this GIYer.

Courgettes are easy to grow and incredibly prolific, growing feakishly fast in the summer.

With each plant producing up to 40 courgettes in a season, two or three plants will be more than enough for most families. Your only problem in fact will be working out what to do with all those courgettes.

I’ve been known to roam the neighbourhood with bags of courgettes in high summer, looking for unsuspecting neighbours to foist them apon.  If all else fails I lob them in to people’s gardens like a paper boy…. Ah no, not really.

Sow the seeds indoors in pots at a depth of 2cm from April on. They will need temperatures of 20 degrees Celsius to germinate so leave the pots on a sunny windowsill.  Harden off well and transplant in June.

Don’t be fooled by their size when you are first planting the seedlings out. Courgettes grow to large, hungry and thirsty plants so leave 50-75cm between plants. Dig plenty of well rotted compost in to the soil before transplanting.

This year I am growing the varieties Atena Polka (yellow) and Ambassador (green). 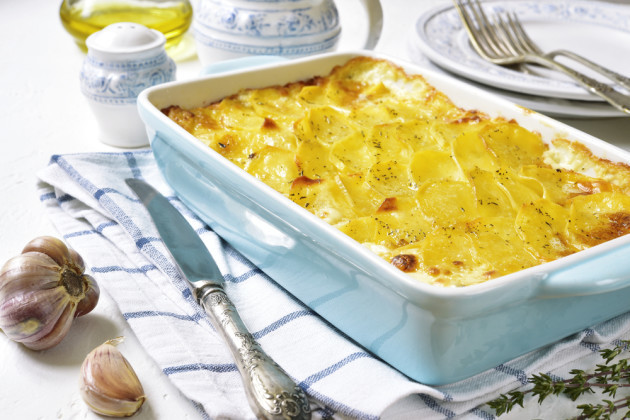 This French dish (translates as the baker’s wife potatoes) was traditionally baked by the baker’s wife early in the morning in the bread oven when the baker finished baking the bread. Two layers of sliced potatoes with a layer of onion and bacon in between.

Fry off the diced bacon, in a saucepan, on a high heat with a drizzle of rapeseed oil until golden brown. Add the sliced onion and crushed garlic and cook for a further 3 minutes until the onions soften slightly. Add a good pinch of salt and pepper, the butter, bay leaf and chicken stock. Simmer for 5 minutes.

Grease the gratin dish with the remaining butter. Wash, peel and slice the potatoes using a mandolin or a food processor. Do not keep or wash the sliced potatoes in water as this will wash out the starch.

Place half the sliced potatoes in the dish and use a slotted spoon to scoop the bacon and onion out of the stock and cover the bottom layer of potatoes.

Add in the remaining potatoes, pressing them down into the dish slightly. Pour the warm chicken stock over the potatoes. Cover with tin foil and bake in a preheated oven at 160℃ for 1 hour.

Take the foil off and bake for a further 30 minutes. Check with a knife if the potatoes are cooked through before serving.