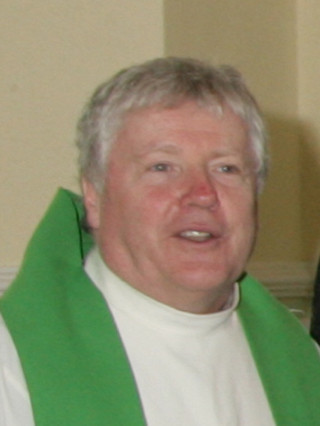 Fr. John O’Gorman
Last weekend Fr.John O’Gorman took up his new ministry as parish priest of Lackagh. Fr.John has served the people in the parish of Menlough and Skehana for the previous ten years.
A native of Tuam, Fr. O’Gorman was ordained in 1980 and his first appointment was as Administrator in Inisbofin. Three years later he took up the position as CC in Roundstone and later served as CC in Barnacarroll and in Athenry parishes, before taking up the position as PP in Letterfrack.  Fr. John O’Gorman succeeds Fr. Des Walsh who has retired.
Speaking at the weekend Masses chairperson of the Pastoral Council Willie Ahearne welcomed Fr. John and said that he will lead the pastoral duties of the parish over the coming years. He added that Fr. John takes up duty with sadness as last week the Sunday Mass was celebrated in Lackagh by Fr. Padraig O’Connor who was laid to rest yesterday and sympathised with Fr, Des who was a close friend of Fr. Padraig. He wishes Fr. John every success and added that the parish would work with him in the years ahead.
Fr. John said that like so many priests he was apprehensive about taking up a new appointment.  All of us have hesitation about change and after leaving the wonderful people of Menlough and Skehana, he told the congretation that he was nervously looking forward to working with the people of Lackagh.

Diocesan Appointments 2017 in the Archdiocese of Tuam