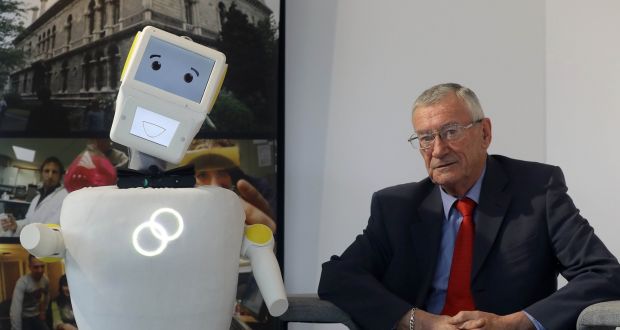 Robots are already used to build cars and wait tables, and now a team of Irish designers are developing a prototype which can attend to the social care needs of older people.

Created by a team working out of Trinity College Dublin at an estimated cost of €10,000, ‘Stevie’ the robot is the result of a decade worth of research and took two years to construct in its current guise.

The five-foot automaton cannot provide assistance for physical tasks, but can perform a range of functions ranging from medication reminders and light conversation to video calls with family members.

Trundling around on three wheels, Stevie’s face comprises a screen which can host pictorial prompters for those with hearing impairments, and may even be used to independently contact emergency services if the user becomes unresponsive.

Such applications may be useful for providing companionship among an often isolated cohort as the population ages, and can help to assuage more acute fears such as the risk of falls, medication errors or carbon monoxide poisoning according to project leader Prof Conor McGinn.

“Stevie can perform several routine tasks which will improve efficiency and substantially alleviate pressure on care staff during periods when the facility may be understaffed,” he told members of the media at a live demonstration of the robot at Trinity’s Science Gallery on Monday.

“The social interaction that is possible with the robot brings many benefits. It provides a compelling way to reduce boredom and stimulate mental activity. It can have basic conversations with its users and play a series of simple games,” he added.

At the demonstration, a pensioner was enlisted to interact with the robot through a number of scenarios such as a user forgetting to take their medication, failing to wake up, and having a video call with a family member.

An avid follower of technological developments, Mr McCarthy came to be involved in the project through the Alone charity for older people, and is enthusiastic about the prospect of such a device one day assisting with his own care.

“It didn’t creep me out at all, I thought he was a cute little fecker, and it’s not like a house pet where I have to feed it,” he said, before continuing:

“If I got to the stage where I needed assistance it would be ideal. I can see people I know that would like to use that technology.”

Far from concerns about artificially intelligent beings developing minds of their own, Stevie remains at an early stage of development with key functions of speech and movement still largely controlled by his human masters.

The team at Trinity are hoping to improve the robot’s autonomous capability for speech and conversation, and can envisage a future scenario in which it can provide physical assistance as well.

“It’s not going to be having discussions with you about philosophy or going to be able to join in the book club, it’s a simple robot that if you tell it to do things it will respond, it will be able to give you updates in the same way as Siri would. But we’re only at the beginning,” said Prof McGinn.

The researchers have now partnered with Alone in an attempt to identify practical uses for the concept, and on Monday they announced the ambitious target of having a commercially-available model ready within two years.

The next step, according to Prof McGinn, involves pilots with people in assisted living settings in Ireland, the UK and the US.

On the issue of costs, he acknowledges that such a solution may be beyond the financial reach of individual customers but is hopeful that hospitals and nursing homes in the first instance will be interested in investing the technology for use between larger groups of patients.

Prof McGinn also mooted the possibility that health insurers could in future subsidise the purchase of social care robots.

“If this is something that can keep people out of hospitals or keep people at home for longer, these are costs that are normally paid for by insurance companies, then I think there is an incentive for them there to co-fund this,” he said.