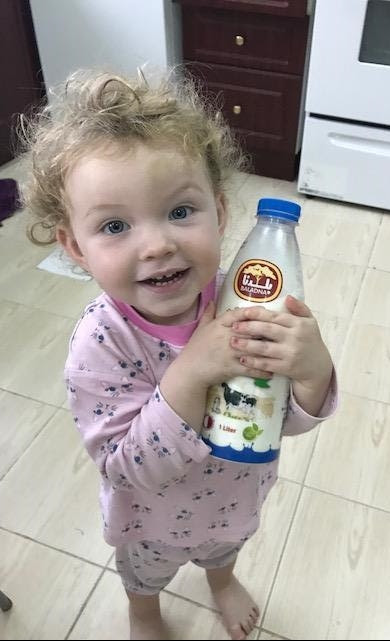 Beautiful Baladna in Qatar, the Land of Milk and Money

Despite being squeezed from every angle, Qatar are holding their own when it comes to the blockade. Six months ago, Qatar were fully reliant Saudi for their fresh food supplies, Saudi being it’s only bordering country it was the only option for the tiny desert nation of Qatar. But since Saudi and its pals cut ties with Qatar, fresh food supplies became a major concern.

But fear not, Qatar is not a state to be held to ransom, and certainly not held to ransom over a pint of milk, so back in June, when all this kicked off, Qatar promised the residents there would be solution to the Milk Crisis, known worldwide to those living outside of Qatar as the Gulf Crisis.

Coming from a country where we are often promised things that don’t come to fruition, for example, electronic voting, Stadium Ireland, (aka the Bertie Bowl), Garth Brooks, I was dubious about the promised of sufficient and sustainable milk supply source emerging in barren Qatar. Camel milk sure, but cows – how?

By plane, that’s how. Within days of what started as a diplomatic crisis, a Qatari businessman was rounding up herds of cattle in Germany, Budapest, Hungary, the Netherlands, Australia and America. 4,000 cows in total were lined up in various airport bovine lounges all over the world in preparation for their new lives in Qatar. Weighing in approximately 590 kilos each, this Qatari businessman was clearly not daunted by excess weight when it took 60 flights to get all the cows to their new destination a state of the art, man made farm 60 kilometres north of Doha in Qatar. Flown in the finest aircraft, probably business class knowing Qatar and led to probably the finest man made dairy farm facility, these cows were imperative to Qatar’s strive for independence from Saudi. But a fancy farm, air-conditioned sheds and 4000 glossy Holsteins does not maketh a jug of milk.   Qatari have the money, but it takes more to make the milk, it takes an experienced farmer. And that’s where Ireland’s own John Dore becomes part of the biggest farming development happening in Qatar.

John Dore is an agricultural consultant from Ireland and is the CEO of Baladna the dairy produce company that has become an over the summer success story since the land, sea and air boycott by Saudi, the UAE and others.

Baladna is now capable of producing 30 to 40% of Qatar total milk demand and John Dore is planning more. Plans are to expand the farm to 10,000 cows in the near future, at this rate you’re likely to be sitting beside a cow or some kind of farm animal when on a flight to Doha. Imagine the pleasure these days in passing the UHT cartons and reaching straight for the fresh milk, the fresh which doesn’t have a funny taste and hasn’t an expiry date of ASAP owing to a boat ride or flight to get here! Qatar’s own fresh milk made out the road and the taste even sweeter because of its Irish links.

The sense of achievement is rife and confidence in Qatar is running high, they say they will deliver, they can and do, deliver. It’s more than just a bottle of milk that’s on the shelves these days, it’s a triumph, a mammoth show of determination and a testament to just what you can achieve in a short space of time, when money is no object. Vanquished is all the negativity about Qatar Rail and its completion date. Replaced is any doubt surrounding Qatar’s ability to host the World Cup in 2022. They can build a city, they can build outdoor air-conditioned stadiums, they can connect it all with automatic rail system and we know it because suddenly we have milk, where there was none. At this rate, I don’t doubt their ability to win the world cup never mind host it. It’s the land of milk and money, the land where everything is possible and land that organised the largest bovine lift in history. And how proud we are that an Irishman is pivotal to this. Qatar, the land where pigs can fly. (so to speak, of course).