From Wikipedia, the free encyclopedia

Baile Chláir or Baile Chláir na Gaillimhe (anglicized Claregalway) is a Gaeltacht[1] village about 10 km north of Galway in County Galway, Ireland. Claregalway was founded on the banks of the River Clare, hence the derivation of its name: Baile Chláir na Gaillimhe meaning “town on the Clare, in Galway”. Claregalway lies within the Gaeltacht and traditionally most of the locals would have only spoken English as a second language. An influx of new residents over the last 30 years has meant that most residents now rarely, if ever, speak Irish. Until 27 September 2017, the village sat at the junction of the busy N17 and N18 national primary routes with over 27,000 vehicles having formerly passed through the village every day.

There are 2,375 people living in the Baile Chlair ED and 12% are native Irish speakers.

This village has an ancient heritage stretching back over a thousand years. It has many features of historical interest but two of the largest ones on the banks of the river include the Claregalway Friary, founded in mid-13th century, and a Norman watchtower (small castle) completed in the 16th century. This watchtower is currently being refurbished for use as a residence. During 2001, a restoration of an old bridge over the old course of the River Clare was completed. These nine stone arches are above the level of the current road.[2] 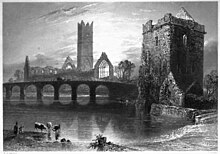 19th-century view showing the abbey, the old bridge and the tower

Claregalway Parish is one of the largest in the county and includes a number of townlands (small clusters of houses) some of the bigger being Carnmore, Lydican, Loughgeorge and Cregboy. Lydican is notable as the origin of the Irish ancestors (Patrick Lynch) of Che Guevara. Lydican was actually an O’Heyne Castle and the last of the chieftains, Connor Crone O Heyne, was living there in 1612. The lands of the O’Heyne chieftains was confiscated in the late 17th century and it was then that the Lynches took up residence there. The Lynches principal holdings were in the city of Galway.

Agriculture would once have been the main industry. In recent years the population has been expanding very rapidly since the village is within the commuter belt of Galway City. Many city workers are choosing to live outside the city environs in a more rural setting. However, the larger population has also led to the growth of the service and retail sector and has provided additional local employment.

Claregalway hosts a Drama Festival each year in March. The Festival has a large number of followers both locally and in Galway City. Compántas Lir [1] is an amateur drama group which is based in Claregalway and Carnmore. Compántas tour nationally in the springtime as part of the All-Ireland Drama Circuit.

1469: O Domnaill led a great army into Connacht to meet Macwilliam Burke. They both proceeded to Claregalway and burnt the town in spite of Thomond and Macwilliam, spent a night encamped there and were refused battle then. The next day they burnt the whole of Machaire Clainne Taidc, killing many horses and many men, including Domnall, son of O Conchobair of Corcomroe.