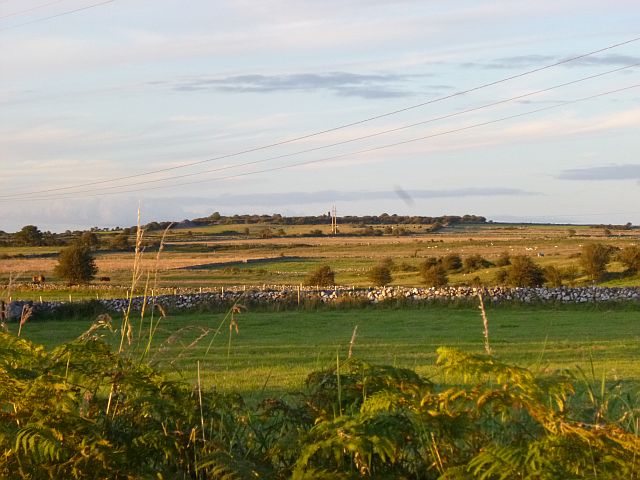 Knockdoe Hill, site of the battle in 1504 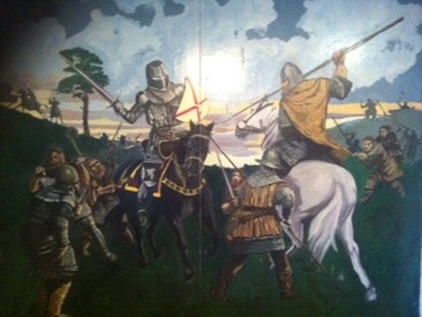 The Battle of Knockdoe as painted by John Dalton

On the 19th August, 1504, a little known battle took place on the low hill of Knockdoe, eight miles north-east of Galway City. Knockdoe or cnoc-tuath  “hill of the axes”  stands at 432 feet, overlooks pleasant stonewalled countryside through which the River Clare flows on its way to Lough Corrib. Yet, it was a crucial battle that led to, as some historians like Hayes-McCoy said, “the death of Gaelic Ireland.”

The Battle of Knockdoe saw Gerald Fitzgerald, the Great Earl of Kildare pitted against his son-in-law, Ulick Burke of Clanrickard. Ireland had two major cultural groups in 1500 AD. The Gaelic Irish were supreme in most of the west and north, along with pockets in the south and east of the country. Whilst they shared the same culture, they were divided politically with ongoing quests for control of territories.

The Anglo-Irish or “Olde English” were the descendants of the Norman invaders of the twelfth and thirteenth centuries. They held sway in the east and south of Ireland as well as the major towns and in certain enclaves west of the Shannon. One of those enclaves was Clanrickard in south Galway, controlled by Ulick Burke.

Whilst they owed allegiance to the King of England, nevertheless they were quite prepared to engage in conflict with other Anglo-Irish families to further their ambition.Gerald or Gearoid Mor as he was known, became concerned that Ulick’s quest for supremacy in Connacht could in fact develop into a major threat to his own position as ruler of Gaelic Ireland. Thus, he gave Ulick Burke his daughter Eustacia in marriage as an attempt to get Ulick to recognise his authority. However, Burke was having none of this and in fact formed an alliance with his relations, the O’Brien’s of Thomand and the Munster chiefs. Concerned with these events, the Burkes of Mayo,  fearful of Ulick’s ambition, aligned themselves with the Earl. To compound matters further, Ulick Burke destroyed three castles belonging to O’Kelly, Lord of Hymany and in fact lived in open adultery with O’Kelly’s wife. O’Kelly informed Gearoid Mor of these happenings but the last straw for the Earl, so to speak, was when Ulick occupied Galway town with his allies. Since Galway had a royal charter, Gearoid being the lord deputy, had to act and thus began his march westwards.

On the Earl’s side were a force from Dublin and the English pale. Included in this gathering were his own Kildare retainers and he was helped by the Mayo Burkes, the O’Donnells, an O’Neill’s faction,  the MacMahons, MacDermots, Magennises, O’Reillys and O’Connors. These were both Gaelic and Anglo-Irish who hailed from the Northern half of Ireland or “Leath Chuinn” of ancient times.Ulick Burke had as his allies the O’Briens of Thomand, the MacNamaras, the O’Kennedys and the O’Carrolls, the men from “Leath Mogha” or Southern half. There may have been as many as 10,000 or more, with Kildare holding the balance.

The Galloglas fought on both sides. Of Scottish origin, they were mercenary soldiers whose favoured implement was the long handled axe. They were employed by the Irish lordships to bolster their own forces. Initially serving in Ulster where they made the short crossing from their motherland, they gradually drifted southwards, serving various Gaelic lords like the O’Connors,  the Mayo and Clanricard Burkes as well as the Earl of Kildare himself. Strong and skilful fighters, they wore shirts of mail over padded aketons with helmets of iron. Using double-bladed hatchets fixed on shafts of timber, they were able to inflict mortal wounds on the enemy. Two boys accompanied each galloglass into battle. One carried his armour, the other his provisions. Each battalion of Galloglass consisted of 80 mercenaries or 240 in all when the auxiliaries are included. Irish smiths made the axeheads which complemented the other weapons  used.

Thus, on August 19th, 1504 the strongest armies of civil war in Ireland engaged in battle. Accounts of the battle itself come principally from the book of Howth and the annals of Connacht. On the previous evening, The Earl faced his troops towards Galway, keeping his Gaelic forces and those from the Pale separate. One interesting aspect here is the mention of a low wall made by the people of the area to safeguard their corn. Some writers have claimed that the use of walls as field boundaries did not occur until much later so this reference would cast some doubt on those claims.

Ulick Burke arrived later than the earl and would have been facing the rising sun when the battle began. Some estimates put his army’s strength at 4000, somewhat smaller than the Earl’s. Burke attacked first through his galloglass but many were cut down by the arrows of the enemy’s bowmen. Yet on they went until all sections  were engaged in hand-to-hand conflict. The battle lasted for hours. Eventually, probably due to his greater strength, the Earl gained the upper hand and Burke’s forces were beaten back towards Claregalway whilst smaller groups headed across the river Clare and were defeated. Local tradition has it that one such remnant was routed in a place
called Ballybrone or “Townland of the Sorrows”. The following morning, the earl marched on to Galway where the Mayor had the Fitzgerald coat of arms set on one side of Lynch’s Castle in honour of his victory.

Ironically, the fortunes of the house of Kildare went into decline after Knockdoe whilst Ulick Burke’s defeat was only a temporary setback for the Clanrickard Burkes. In 1506, Gearoid Mor died as a result of a shotgun wound. His son, Gearoid Og succeeded him  as Lord Deputy but did not have the same astuteness of his father. His period as head of the House of Kildare saw the English crown take a more hands on approach to Irish affairs. In 1534, Silken Thomas, Gearoid Og’s son, revolted against Henry VIII who sent Sir Henry Skeffington to crush the uprising. Silken Thomas was executed and Gearoid Og died in the Tower of London. Thus ended the House of
Kildare. The Clanricard Burkes made a surrender and regrant agreement with England during the 1540’s. This meant that they were to be the dominant force in Galway over the next two centuries.

The battle of Knockdoe left its own mark on Irish history. It is the first recorded time that a gun was used in an Irish battle. It is also remembered  for the deployment of such a large force of mercenaries. Ultimately, it set the  trend for Irish warfare over the next few centuries. 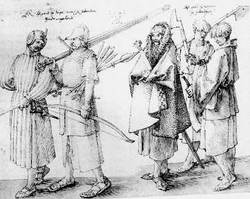 Galloglass Mercenary Soldiers-A drawing by German artist Albrecht Duere showing galloglass warriors in their traditional dress and helmet. They also bear their weapons-a small bow and the Claymore, the long sword. Image is courtesy of Wikipedia.

From the Freeman’s Journal, Thursday, August 22nd, 1844
“…the traditions of that famous battle are still fresh among the peasantry of the neighbourhood. The name of the hill, Cnoc-tuagh,or the hill of battleaxes, is said to be derieved from the weapons that prevailed at the fight; fragments of rusty iron are found there daily; some old people pretend to describe the position of the armies; and the names of many places in the vicinity-such as Turlough-na-gurp-, the callow of the dead, Baile bron, the townland of sorrow or lamentation, &c,recal ideas associated with the slaughter of that terrible day.”