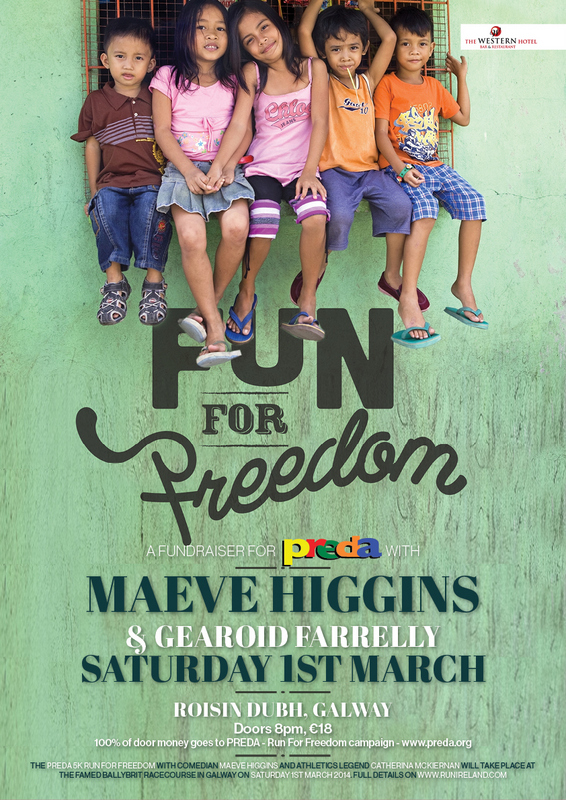 On March 1st 2014, athletics legend Catherina McKiernan and comedian Maeve Higgins along with the Galway All Ireland winning camogie teams are taking part in The Run for Freedom in aid of PREDA.

This 5km Run for Freedom is happening at 12pm on the famed Ballybrit Racecourse in Galway and is open to all. Last year, hundreds of runner of all abilities took part in the race. Register online at www.runireland.com.

A comedy night for PREDA begins at 8pm that evening Fun for Freedom in The Róisín Dubh features Maeve Higgins with The Sunday Times describing her as being “Like a Shakespearian court jester—her daftness masks perceptive truth-telling.” Support act Gearóid Farrelly has been called “the next big thing in comedy” by The Irish Independent with Chris Kent offering “a perfect mix of dry confidence and razor sharp wit” (The Comedy Scoop).

Tickets cost €18 (special reduction for Freedom Runners!) and are available from The Róisín Dubh and OMG, Shop Street or online.

PREDA is a children’s charity based in the Philippines that strives to free children from adult prisons and child prostitution. Founded by the Nobel Peace Prize nominated Fr Shay Cullen, PREDA has worked to protect women, children and human rights in the Philippines since 1969.The charity has recently become involved in supporting those affected by Typhoon Haiyan, with a team of social workers linking up with recently orphaned children and providing food relief. Now more than ever, PREDA appreciates the support of the people of Galway in helping their work and to spread the message to a wider audience.

If you have the freedom to run, why not run for freedom?