Since the 13th century, the Franciscan friary in Claregalway has dominated the skyline of the village.  This presentation lets the ‘dumb stones speak’ by examining the history of the foundation, the lives and lifestyles of its medieval occupants and the community’s impact on their neighbours and hinterland.

The Franciscans in Claregalway were part of an international network and this is reflected in their pastoral, intellectual, cultural and economic activities.  The picture emerges of a community deeply rooted in their locality yet open to influences and outlooks from all corners of the known or imagined world.

Colmán O Clabaigh OSB is a monk of Glenstal Abbey and a medieval historian specialising in the history of Irish monasticism and religious practice.  <His publications include The Friars in Ireland 1224-1540 (Dublin, 2012), which was awarded the 2013 Prize for Irish Historical Research by the National University of Ireland.

This event is expected to attract a large crowd and patrons are asked to arrive early. 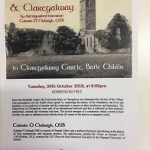