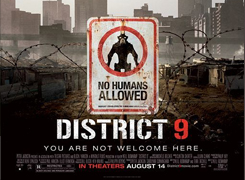 Director: Neil Blomkamp
Starring: Sharlto Copely, Jason Cope
Rating: 15
When District 9 was released in cinemas last year, it was a very pleasant surprise. The film managed to draw me in right from the get go, and its original premise works just as well on DVD.

The film tells the tale of extra terrestrials (referred to as ‘prawns’ by the public) who arrive in Johannesburg in 1982. The area is turned into a type of detainment camp called District 9. The prawns are treated as asylum seekers, with some becoming involved in destructive behaviour. In the year 2010, Wikus Van De Merwe is given the task of evicting many of the aliens from District 9 by a company called MNU. Needless to say this doesn’t go as well as planned, and Wikus is whisked off on a thrill ride that really is a treat for any sci-fi fan.

District 9 has an amazingly broad appeal and is given genuine believability by Sharlto Copely as Wikus. When he is first introduced he has a very expendable feel, as though he could be killed off at any moment.  As the film thunders on it becomes increasingly apparent that we will be following Wikus’ story, which turns out to be a great thing considering the intrigue surrounding his tale. Copely brings a level of realism to the character that I don’t think has been seen that often. The handheld camerawork documenting Wikus’ eviction attempts are also full of realism, nearly convincing you that you are watching a live TV feed.

The film also succeeds in seriously personifying the prawns, where so many movies before have treated entire alien species as dumb and destructive. District 9 treats the prawns as a serious race, one that is full of both good and evil. This decision alone elevates District 9 above many other summer blockbusters.

The special effects in District 9 blend the prawns seamlessly with their human co-stars. In a world of occasionally overbearing special effects, District 9’s stand out as very impressive. At no point do the prawns look out of place, with expertly crafted creature design provided by WETA, the same people responsible for ‘ The Lord of the Rings’. The mothership is breathtakingly realistic and it instantly sets the mood for the rest of the movie.

In cinemas, District 9 was an absolute must-see, and in its transition to DVD, nothing’s changed. It remains an example of how something relatively unknown can reach the heights it deserves, with a little help from word of mouth and viral marketing.  In District 9’s case, the accolades are definitely deserved.