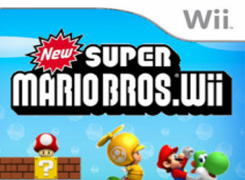 The main addition to the Wii version is the inclusion of a four-player multiplayer mode. This allows one to four players to take on the lengthy main quest as well as battle in coin-based arena games. This was a logical step given Nintendo’s new approach of making games accessible to everyone, regardless of age or gender. While this addition is certainly welcomed it doesn’t work quite as well as it should.

Mario platformers are difficult games at the best of times, but when three more players are thrown into the mix the result is hectic. Precise jumps become frustrating chores as you attempt to avoid landing on each other’s heads and causing chaos. The fact is that most Mario games require such skill and patience that to have to worry and wait for your partners is completely distracting. It can be fun at times but if there is any variance in skill between players this can lead to confusion and delays as you wait for an inexperienced player to make that dodgy jump. If not taken too seriously the multiplayer mode can provide genuine, boisterous laughter, but these are rarely seen amongst fits frustration.

The single player on the other hand, provides that classic Mario experience we all know and love. There are eight worlds overall which makes for a surprisingly long adventure. With the Wii remote held horizontally, players use the directional pad and the 1 and 2 buttons to move their character, to run, and to jump. New suits, like propeller Mario and penguin Mario allow context sensitive action with a shake of the remote. Throughout the game the remote can be used to tilt and control various ledges. This isn’t revolutionary, but Nintendo chose to play it safe instead of shoehorning in unnecessary motion controls.

If you’re looking for a brilliant old-school challenge you could do far worse than New Super Mario Bros. Wii. It’s just a shame that the multiplayer mode couldn’t be more solid.