This report presents the preliminary results of an archaeological excavation undertaken at Claregalway, Co Galway, on behalf of the Office of Public Works (OPW) and Galway County Council. The works were undertaken in advance of flood relief works on the River Clare in Claregalway, Co Galway. Ministerial Consent (C437) was provided by the National Monuments Service and the site was excavated under Registration Number E4248. The flood relief works are being undertaken by the Office of Public Works with the support of Galway County Council.

Construction activity was proposed by the OPW at three separate areas in the scheme area to facilitate flood relief works. These works include erection of a temporary bridge and related road accesses as well as excavation of ground to facilitate insertion of a ‘flood eye’ to increase flow under the existing bridge. 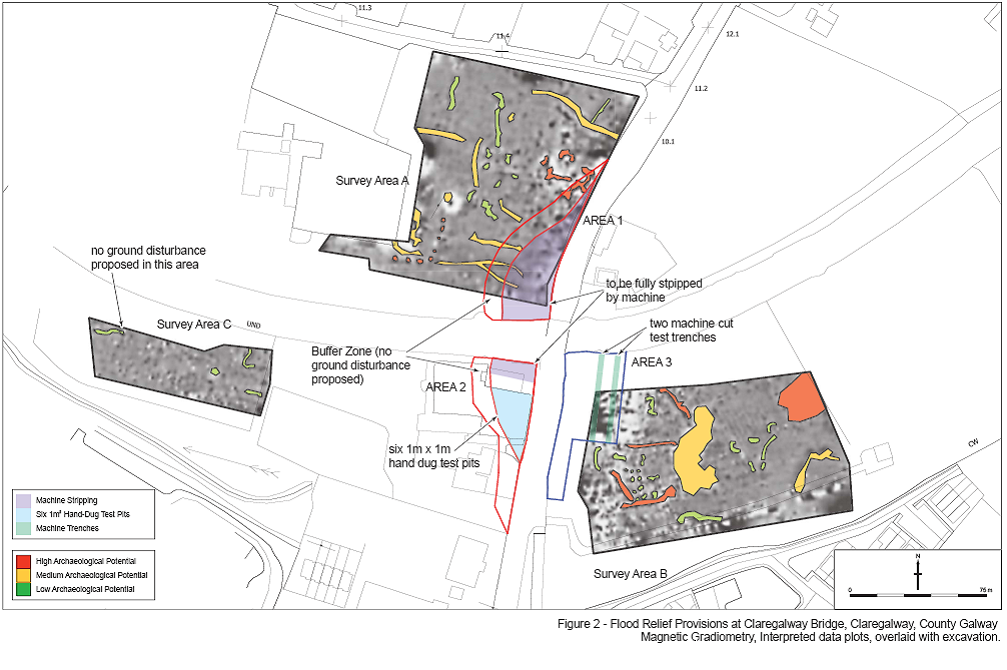 In October 2010 Headland Archaeology (Ireland) Ltd was commissioned to carry out a geophysical and topographical survey of the scheme area and environs. The results of these surveys informed a subsequent programme of test excavation, which began on the 18th of November 2010 and were completed on the 25th of February 2011. All three areas were archaeologically tested and all contained archaeological remains.

In consultation with the National Monuments Service, Department of the Environment, Heritage and Local Government, the Project Archaeologist and the consultant engineers, it was agreed that Areas 1 and 2 would be fully excavated. Deposits in the third area were protected and preserved in situ by the placement of an exclusion zone around the archaeological remains. 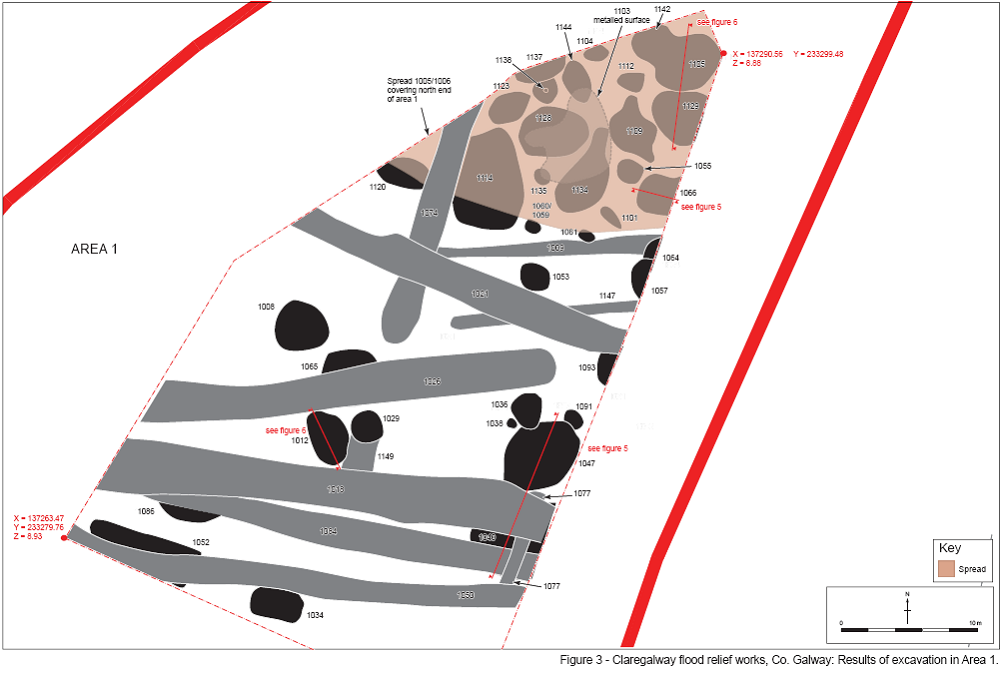 The north portion of Area 1 was found to be covered with a deposit rich in animal bone, metallurgical waste or slag and mussel/oyster shell as well as numerous small artefacts. This deposit revealed 149 artefacts including floor tile, an arrowhead, medieval pottery, a perforated bone pin, perforated roof slate, an iron key, and an iron blade. A series of seven linear cut features were uncovered to the south of this deposit, mostly orientated east‐west or northeast‐southwest, although two were orientated north-south.

These appeared to be boundary ditches and drainage ditches. Approximately 23 medium and large pits were also uncovered, some found in the northern portion of this area underneath the aforementioned deposit. Among the more notable finds from these cut features were a long‐cross penny and arrowhead recovered from a pit located in the northeast corner of the site and two human skulls found in large pits close to the western limit of excavation. A deposit similar to that excavated in the northern portion of the area was discovered during testing to the south of the excavated area; however this was sealed by a significant deposit of grey silty clay over 1m in depth, which was deemed adequate to protect the in situ archaeological remains here, this area remained unexcavated. This proposal for preservation in situ was agreed in consultation with the National Monuments Service, Department of the Environment, Heritage and Local Government, the Project Archaeologist and the consultant engineers. 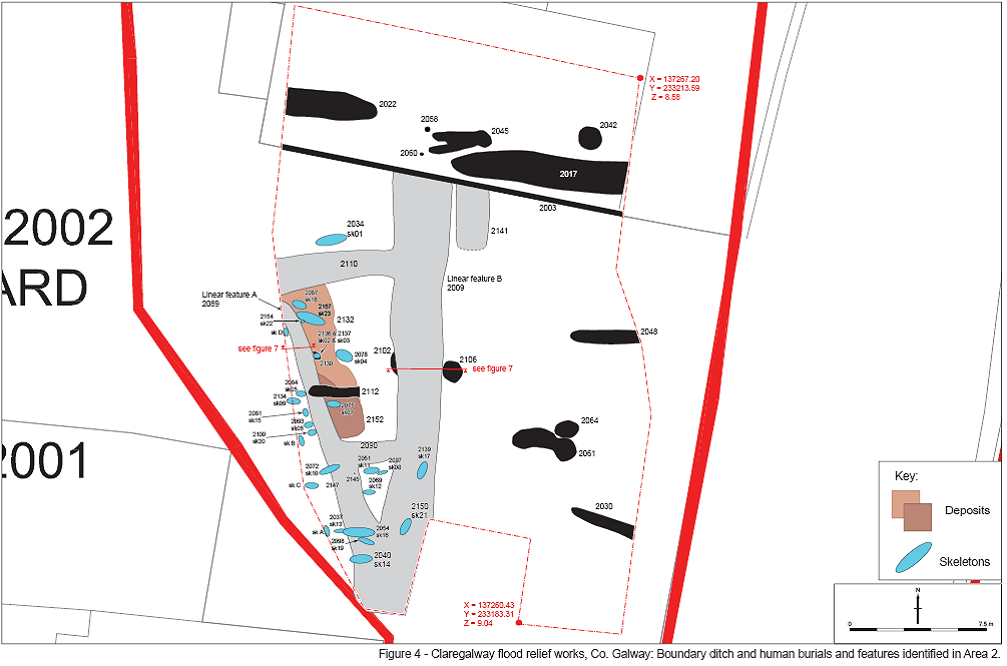 This area produced two linear features (A and B) running in a roughly north‐south direction and probably related to the church and graveyard immediately to the west. These linear features may have been boundary ditches with one replacing the other over the course of the development of the church and graveyard. A number of linear features running in an east‐west direction were also identified. To the west of the most easterly of the north‐south linear feature (Linear feature A), 23 inhumation burials were uncovered, the majority of which were orientated west/east. A large assemblage of disarticulated human bone, indicative of intensive cemetery activity, was retrieved from the features and deposits in this area along with a number of small bone pins, a shroud pin, a strap‐end and a possible pin clasp.

A low deposit of possible burnt mound material was uncovered during archaeological testing. The placement of an exclusion zone around this material was agreed in consultation with the National Monuments Service, Department of the Environment, Heritage and Local Government, the Project Archaeologist and the consultant engineers. Therefore these remains will be preserved in situ and further archaeological excavation at this location was not necessary.

Further analysis of the results of the excavation will be carried out to refine the interpretation of the site.