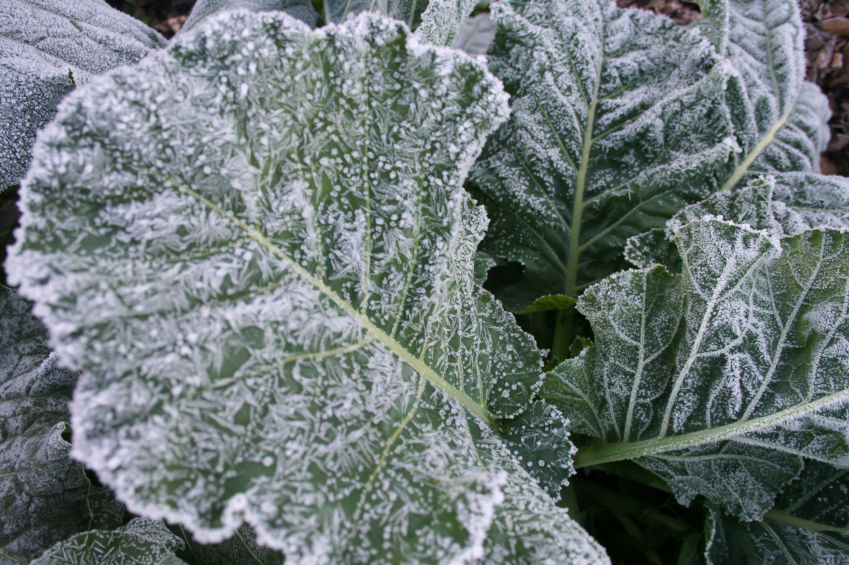 With the 2013 growing season nearly upon us, I’m intrigued by the idea that 2012’s GIYing is still paying dividends. It’s a good time of the year therefore for a bit of stock-take. I use various locations to store vegetables—our kitchen doubles up as a larder at this time of the year (you can barely get in to the kitchen—there are veggies hanging out of every available space!); then there’s the garage where I keep vegetables in sacks, boxes and the freezer. And finally there are also vegetables still in the ground in the veg patch and polytunnel.

In the kitchen: onions are stored in a corner of our kitchen on onion ropes. There are still roughly 30–40 onions left out of a total of 150. I have no idea why but I grew massive onions this year, so everyone comments on the size of them. I pretend I’m not bothered by their praise but of course secretly, I’m absolutely made up. We still have about 20 bulbs of garlic hanging up in a braid, and about 5 squashes on top of the dresser in the kitchen. On a shelf in the utility room we have various chutneys, pickles and piccalillis.

In the garage: we have a chest freezer, the penultimate resting place to last year’s tomatoes, broad beans, peas and runner beans, shredded cabbage, celery and whole chilli-peppers. In boxes and sacks I still have some celeriac (maybe 7 or so), parsnips (well over 20) and beetroot (about 10). The only vegetables left in the ground outside now are leeks, kale, purple sprouting broccoli and Jerusalem artichokes. Haven’t touched the artichokes yet this year, but we are working away on the kale and leeks as we need them. The sprouting broccoli is starting to come—hopefully that will be a star performer for February and March.

The polytunnel is still churning out green leaves—courtesy of a sowing in September (Joy Larkcom’s advice)—we’ve had a marvelous supply of claytonia, mizuna, mibuna, red mustard and hardy winter lettuce. All in all, though there’s a sense that the larder is depleting it’s not exactly empty yet. Will we make it through to April or May when we get our first crops from this year’s sowing? Possibly not, but we will be damn close! Happy New Year from GIY!

Things to Do this February

To Do
Plan. This is the time to decide where and what you are going to grow this year. If you are just starting out join your local GIY group for advice and check out our website for handy getting started guides and videos. Consider building or buying raised vegetable beds. Order your seeds, onions sets and seed potatoes. Turn over the soil in February only if the weather is dry—if the soil sticks to your boots it’s too early for digging! Chit seed potatoes—put them in a container (e.g. used egg carton or empty seed tray) and leave them in a bright warm place to sprout.

Harvest
You may still have winter cabbage, perpetual spinach, chard, leeks, kale, cauliflowers and Brussels sprouts in your veggie patch and depending on how successful your growing/storage regime last year was, you may well still be tucking in to stores of potatoes, celeriac, carrots, parsnips, onions, cauliflower, Jerusalem artichokes, winter squash, pumpkins, leeks and red cabbage.

Recipe of the Week—Spinach and Cheddar Soufflé

This recipe is from Donna Hay’s Modern Classics cookbook. The word soufflé needn’t fill you with terror—it’s quite straightforward, if a little fiddly. If you are growing perpetual spinach in your garden and have your own hens, then this is really a store-cupboard recipe that won’t require a trip to the supermarket. Ingredients:

Place the spinach in boiling water and remove after one minute and drain. Squeeze all the excess liquid from the spinach and then chop. Melt the butter in a saucepan over a medium heat. Add the flour and stir until smooth. Whisk in the milk and stir briskly until the sauce thickens. Remove from the heat and stir through the spinach, egg yolks, cheese. Season well with salt and pepper. Allow to cool to room temperature. Preheat the oven to 210° C. Grease 4 × 200g capacity ramekins with butter and sprinkle with dry breadcrumbs to coat. Beat the egg whites in an electric mixer until soft peaks form. Gently fold one-third of the egg whites through the spinach mixture and then the remaining two-thirds. Spoon in to the ramekins and place them on a baking tray. Bake for 15 minutes until puffed and golden. Do not open the oven door while cooking.

Tip of the Week—Rejuvenate perpetual spinach

Perpetual spinach plants may be looking a little tired at this time of the year but with the milder weather should also be showing signs of new growth, particularly at the centre of the plant. Cut the larger outer leaves with a sharp knife at the bottom of the stem so that the plant can concentrate on this new growth.

GIY aims to create a healthier, more sustainable world where people grow their own food. We bring people together in community groups and online to share tips and knowledge. We also run events and programmes to inspire and support people to grow their own. GIY is a registered charity (CHY 18920) and proudly supported by Woodies DIY. Support our work by becoming a member of GIY for €35 and receive a member’s pack with seed selection, member’s card, GROW magazine, grower’s guides and more. www.giyireland.com.

Michael Kelly is a freelance journalist, author and founder of GIY Ireland.