This story is by Oranmore/Kinvara resident Mary Smyth whose husband Ben was diagnosed with lyme disease in 2006.

I would appreciate some publicity on Lyme disease—its official name Borrelia Burgdorferi, which is a bacteria carried by a tick which is transmitted to a human by a tick bite. Studies show that Ireland has one of the highest rates in Europe and West of Ireland has the highest % of cases in Ireland. The disease is classified by the World Health Organization as an infectious or parasitic disease from a member of a larger family of bacteria. Ticks are second only to mosquitoes for carrying disease to humans. Lyme Disease is known as the “Great Imitator” it can mimic other diseases such as Parkinson’s Arthritis, Chronic Fatigue Syndrome, Multiple Sclerosis, amongst others, so it is felt that a lot of Lyme Disease in Ireland is actually been misdiagnosed.

Ben went from a healthy man who rearly visited his GP to a very sick person mainly because of little or no awareness of Lyme disease either by individuals or medical professionals. It is a constant struggle for people to get medical recognition of this debilitating illness. Through research we now realize that his condition started in 2001 but he was not diagnosed until 2006.

Ben became ill end of August 2006; it started with a pinch like feel on his instep on his right foot, which gradually got worse, a couple of days later the foot began to swell and he had shooting pains from foot to knee, he went to his local A+E department in UHG, he visited A+E six times between 7/9/06 to 2/10/06.

On his first visit to A+E the doctor examined him; he was given pain medication prescription, she told him she didn’t know what was wrong, but in her opinion he was experiencing nerve pain. Two days later Ben returned to A+E the pain had become more severe and the pain relief that was prescribed was not relieving the pain he was experiencing, his foot was beginning to swell and the pain was sharp and bouncing from ankle to knee he had not slept in days and was exhausted. The casualty doctor referred him to orthopedic outpatients at Merlin Park Hospital where he saw Dr XX Registrar. The reason he was sent to orthopedic consultant is that he had a pin in his right leg as he had broken it years before. Examination & x-rays of the leg by Registrar XX showed that there was the nothing wrong with the pin and if his condition got any worse to return to UHG.

Ben’s condition was not improving and he returned to UHG hospital about two days later where they decided to do a scan of his leg for vascular reasons and to eliminate a clot in the leg.

Ben’s condition rapidly deteriorated within a few days, he was stupid with pain, no sleep, no concentration and had little or no power in leg from ankle to knee, and his arm was just getting weaker as the days went by. We went to see our GP who send him to casualty straight away but after getting yet another opinion he was sent home from UHG A+E once again.

I had asked for a second opinion before leaving casualty, and we spoke to vascular doctor, he assured me he would talk to his consultant and he would try to get an appointment for Ben in Vascular Outpatients. As promised he did get us the appointment, and we went to Mr. XXX clinic on the following Friday. Eventually we got a doctor who recognized there was something terribly wrong with Ben. After he made a phone call to Orthopedic Outpatients Ben was rushed to Merlin Park Hospital, Dr X Registrar was on duty, (he was the doctor who had had x-rayed the leg previously). He could not believe the deterioration in Ben’s condition and admitted him to hospital straight away. At this time he was in a lot of pain and had very little power in leg and was beginning to lose power in right upper arm, and was very confused. He was admitted under an Orthopedic Specialist on 5th October 2006, who straight away contacted a Neurologist. He spent 6 days under Orthopedic Surgeon while waiting for a bed in UHG under Neurologist X.

Dr X Neurologist in UHG diagnosed him in November 2006 with a Chronic Neurological Condition (Neuroborreliosis) Lyme Disease. He spent 7 weeks in hospital; he underwent intensive investigation e.g. MRI scans, sural nerve biopsy, CT scan on spine, multiple blood investigation and Lumbar puncture where antibodies were found in spinal fluid CSF. (When the results of his sural nerve biopsy returned with a diagnosis of Mononeuritis Multiplex a nervous system disorder that involves the damage to at least two separate nerve areas) a clinical diagnosis of Chronic Neuroborreliosis Lyme Disease was made.

He was prescribed intravenous ceftriaxone antibiotics for 30 days altogether, 14 days after diagnoses in UHG and a further 16 days when I came home from hospital. He was prescribed Lyrica for nerve pain, which he is still on (April 2013). Intensive physiotherapy every day for approx 2 hour in UHG, which he continued for next 12 months at home daily and weekly intervals now(April 2013).

Chronic Neuroborreliosis Lyme Disease has left him with:

The Neurologist has told him that his condition will not get any better and that the harm that was done to his nervous system due to the delay in diagnoses of the Lyme disease will be permanent. Late stage 3 patients with neurological manifestations may have complications, especially if the disease is in the late chronic persistent stage especially when it involves the central nervous system.

Ben never remembered being bitten, never took a tick out of himself, the only outdoor hobby he had was gardening in our small garden in Oranmore Co. Galway.

As we try to figure out when Ben got a tick bite and where we were in around July 2001, we don’t have any answers, Ben’s (rash), which we now know is the Erythema Migranes E.M. rash associated with Lyme Disease, was misdiagnosed as a food allergy (in research we have learned that people’s symptoms can re occur in cycles and can flare up after months or years); the rash can also be an allergic reaction to Tick Saliva.

So we have to ask was it in July 01 that all Ben’s medical problems began. He originally went to our GP in July he had large red lumps/spots on his left arm, he woke up with lumps on back of neck, forehead, below left eye, right shoulder, and right wrist. The GP prescribed antihistamines & steroids within 8 hours all the spots had faded, but he was left very tired after that first episode for weeks.

Our GP referred him to a Consultant Dermatologist in Bons Secour Hospital Galway; he had tests done in September 2001. After taking his medical history, she told Benen at this time that she felt that he was at the end of an episode of urticaria (allergic reaction, which is a type of rash, cause unknown) and that it would probably just ware away, he did have an episode at this time but the spots/rash was fading. Our GP had given him a repeat prescription for antihistamines and steroids. He had a couple of very bad recurring episodes in the next few months one in particular when our GP was going to hospitalize him for very low blood pressure, we monitored him at home and within a few hours when he took antihistamine and steroids his symptoms wore away, but he would be very tired over next 7 to 10 days.

Occasionally through next 3 years Ben would get bouts of the rash but always the antihistamines steroids and rest would help too realize his symptoms.

Late 2004 Ben started having funny feelings in his upper right arm he describes it as a weakness he did get a few physiotherapy sessions. He also had sessions with chiropractor 3 sessions weekly he had approx 22 sessions, he felt after this time there was no great improvement so he decided to get some more physiotherapy & deep message on his arm, he did feel that this did help for a short time. He even went down the road of alternative medicine and had Vega testing done for allergies. The arm continued to be weak he always knew that things just weren’t right with it; he learned to live with it and compensate using left arm where possible for the following two years.

April 2006 he had very bad cold symptoms viral like infection very tired, sore throat, aches & pains, even after taking full course of antibiotics he still felt very unwell, tired unable to sleep well and with a persistent cough that lasted for weeks.

It has been almost seven years since Ben was diagnosed with Lyme disease, he lives with nerve pain, chronic tiredness and other medical conditions including a diagnoses of prostate cancer. He has not worked since 2006 and is now on Invalidity Pension. He struggles each day with his disability, but is a very optimistic and easy going person. It has been a hard long road to recovery and recognition of his Disease, not been able to return to work and the financial hardship that can bring. He loves gardening, cooking, reading, and knows his limitations at this stage. We are volunteers with Tick Talk Ireland—Encouraging awareness, prevention and treatment of Lyme Disease in Ireland. 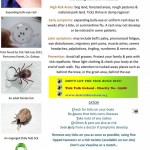 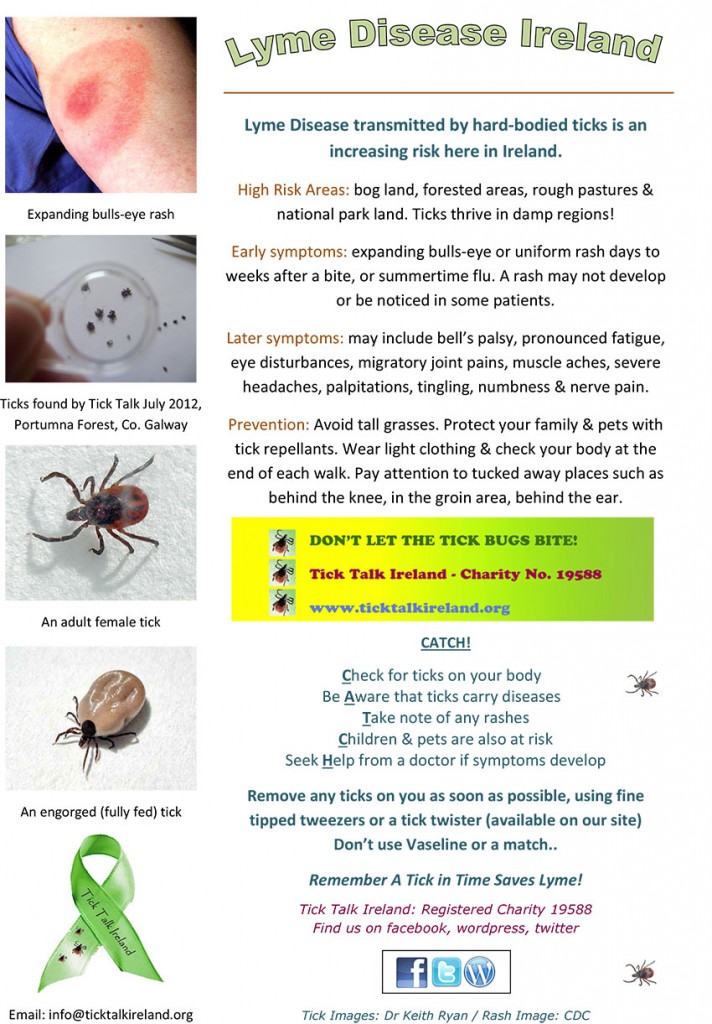