Claregalway Tidy Towns committee did trojan work in the community over the summer, planting flowers, landscaping and generally keeping the village tidy! The following is a report from the official Tidy Towns adjudicators, who visited Claregalway in June and assessed the area on a number of criteria, awarding Claregalway a total of 251 points out of a possible 400 (5 points up on last year). The committee is commended on the completion of your excellent projects for the 2013 Tidy Towns Competition and it is great to see the appearance of Claregalway improving as a result of your hard work. Well done and keep up the good work. 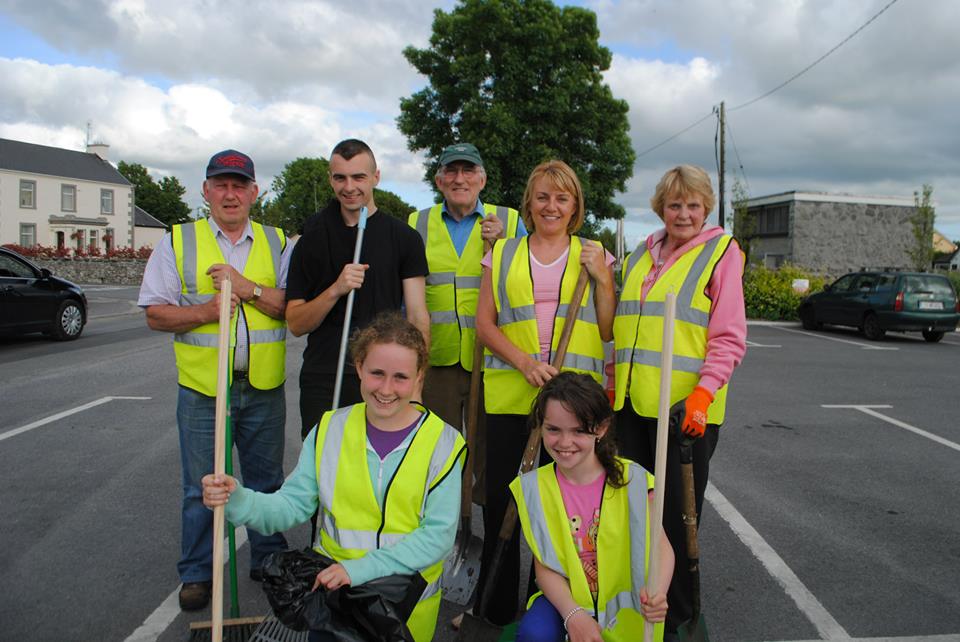 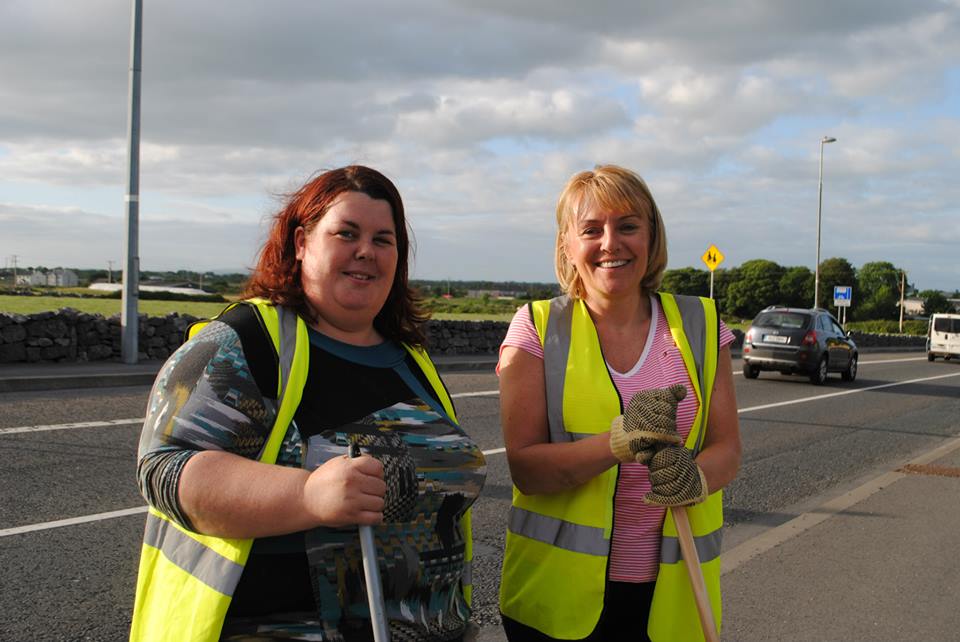 We are delighted to welcome Claregalway to the 2013 Tidy Towns Competition. You have a good core membership of your group with 12 members and organising your workload by using subcommittees to cover issues such as fundraising, liaising with schools, and engaging with experts appears to be practical and effective.

We are pleased to see that you have built strong links with the business community in Claregalway as well as links with the voluntary sector and it is heartening to read that many other voluntary groups in Claregalway such as the Community Development Association, the Active Retirement Group, the local youth group and the GAA are involved in your projects. It is also good to see that you have strong working relationships with Government and National Bodies such as the Heritage Council, OPW, NPWS and Galway County Council. Be sure to also contact Galway Rural Development to discuss your projects as they have been supportive of other tidy towns groups in the county. Your communication strategy is commendable as all forms of media are used—including Facebook. Have you considered setting up your own website to inform people about your actions and activities?

We’re delighted to read that you have built such strong links with the schools by setting up a Junior Tidy Towns Committee and giving them ownership of some landscaping projects. Your application form was informative, but no map was included with the pack received by the adjudicator. Be sure to include the map for 2014 and you’re encouraged to give consideration to preparing a three to five-year tidy towns action plan as this will help you to identify, schedule and organise projects under each of the tidy towns categories.

There is much more to the built environment of Claregalway than meets the eye. Whilst the modern buildings accommodate shops, hotels and other commercial units, we were quite surprised to find that there is a rich history to the village and a number of fine historical structures to provide evidence of this. Of particular significance, is the Castle on the Tuam Road. We were delighted to read that the refurbishment of the Castle is well advanced and it is a tremendous asset for the village. We particularly loved the Dragon on the roof! The ruins of the old Abbey, the graveyard and of course the old bridge in the centre of the village are further historical features of note and we recommend that consideration is given to setting up a heritage trail (complete with information plaques and route map) in order to emphasise the heritage and history of the village. The many modern buildings that can be found looked well and it is good to see that business and property owners in Claregalway are taking such good care of the buildings. The adjudicator was particularly impressed with the appearance of the Arches Hotel, the Claregalway Hotel (with nice planters at the entrance), Hessions, the Thatch, the Centra, Supervalu and the attractive modern Claregalway Shopping Centre to the rear of Supervalu.

The Church and its grounds also looked particularly nice. We note your application form states that it is proposed to provide an information plaque telling the story of the spires, which can be found on Oranmore road. This sounds like a great idea as the spires were observed and the adjudicator wondered what the significance of this piece of public art is. Other buildings that looked particularly well during adjudication included the Educate Together School across from the Abbey, with its green flag proudly flying. It is disappointing to see that your work programme has been thrown into disarray by the roadworks involved in laying the sewage treatment pipe network. However, we have no doubt that your dedicated group will, along with the Council and others, get Claregalway back to looking its best in the near future. It is great to see that, despite the changes brought about by the roadworks, your projects have continued with local businesses such as Hessions, Supervalu and the Arches Hotel committed to improving their buildings and supporting the tidy towns effort.

The group should be proud of your efforts under this category for 2013 as a number of attractive planting beds were observed. A highlight for the adjudicator was the large planting bed in the centre of the village adjacent to the old bridge. This colourful and extensive bed with its broad diversity of planting, provides a lovely setting for the old bridge, a key historical structure in the village. The grounds of the church were also admired as it is clear that considerable time and energy has been spent maintaining them and it is pleasing to see that some of the businesses, such as the Claregalway Hotel and the adjacent Arches Hotel, also provide and maintain planting in the front car parks of their premises. The planted bank on the Oranmore road (close to the Spires), was most attractive and colourful as it provides a lovely impression for visitors on this approach and for the residential area adjacent to it. It is recommended that the prevalence of the Cotoneaster in the landscape beds outside the Arches Hotel and around the church should be monitored as this plant can flourish to the detriment of other plants. Consider cutting it back on an annual basis in order to provide for a better diversity of plant species.

Please note that the section on the Franciscan Abbey that was included in the landscaping section in your entry form would be best included in the built environment section in future years. We were pleased to read that you have continued to provide planting tubs along the Main Street as well as place name plaques in addition to maintaining areas such as the church grounds and the arch sculpture. The work being undertaken at the new Cemetery is also to be commended but please ensure that the correct guidelines for working in cemeteries are followed. 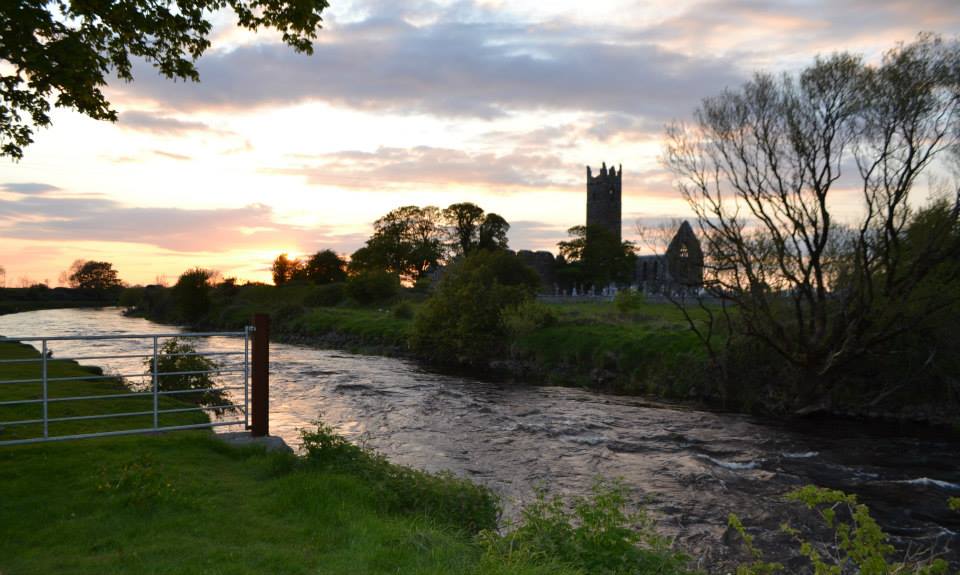 We were delighted to read about your plans for a Riverwalk, as this would provide an excellent amenity for locals and visitors alike. However, it is also disappointing to note that support has been withdrawn from landowners and this threatens the project. It is recommended that you contact either Galway County Council or Galway Rural Development who may be able to put you in touch with other tidy towns groups in the county, who have provided similar amenities as they may be able to help you to resolve your difficulties. The Council or Galway Rural Development may also be able provide you with sources of advice on this matter and advise whether funding for heritage walks is available. We note your list of common birds to be found in the vicinity of the River and the Galway area. Are there any plans for a nature trail (with interpretive signage)? Perhaps the school would be interested in developing a nature trail in partnership with you. 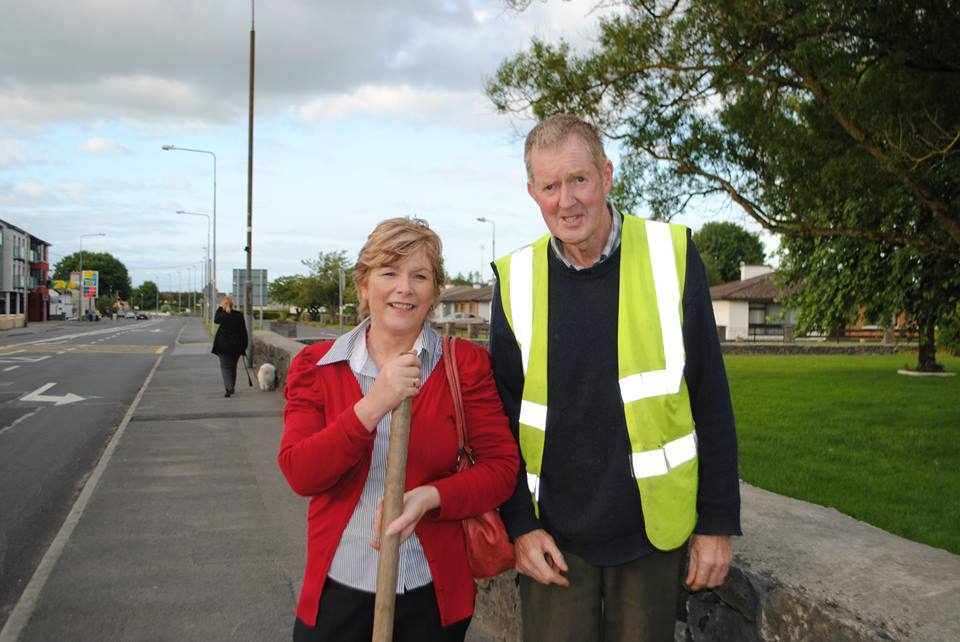 The performance of Claregalway under this category, was generally good, particularly given the heavy volumes of traffic that passes through the village on a daily basis. The majority of areas observed were free from litter and where litter was spotted (in the Supervalu car park, at the entrance to the River Oaks Housing estate, in An Mhainistir and in the industrial estate), it was clear that its presence was a recent occurence. Therefore, this is considered to be a good performance and it demonstrates the vigilance of your committee as well as on your strong anti-litter message. Well done on your no litter signs and consider identifying blackspots for more frequent litter picks. Do other voluntary groups take part in your litter picks? Given that Claregalway is sizeable, have you considered asking voluntary groups or residents associations to adopt a roadway or roadway section? 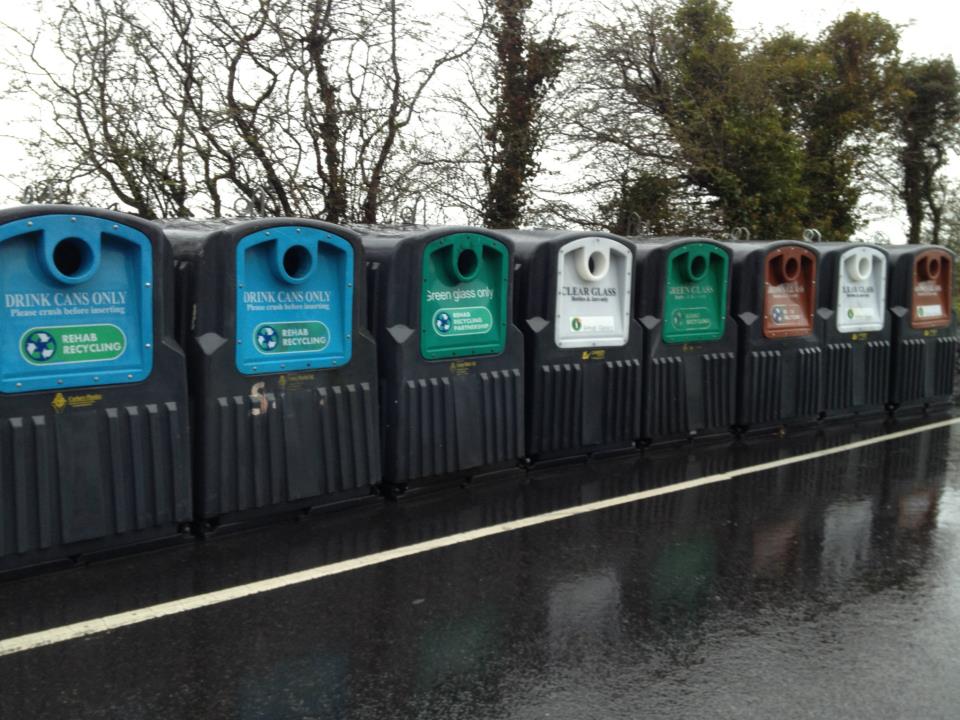 We would like to emphasise that the focus of this category is on minimising and eliminating the production of waste. Therefore, Tidy Towns groups are encouraged to raise awareness of the need to minimise and eliminate waste in their communities as well as undertaking actions that achieve this objective. Projects that could raise awareness include organising a waste minimisation / home composting seminar with Galway County Council.

The committee should also consider how it can minimise waste generation when carrying out its own projects. Examples could include rainwater harvesting, growing your own plants and making your own compost from domestic waste and waste from your planting schemes. More ideas on waste minimisation projects can be found in the Tidy Towns Handbook. This category also provides excellent opportunities for joint projects with your local green schools who are also interested in minimising waste produced. It is noted that the committee has been successful in securing a location for the bottle banks in the Corporate Park and you are to be commended on this. 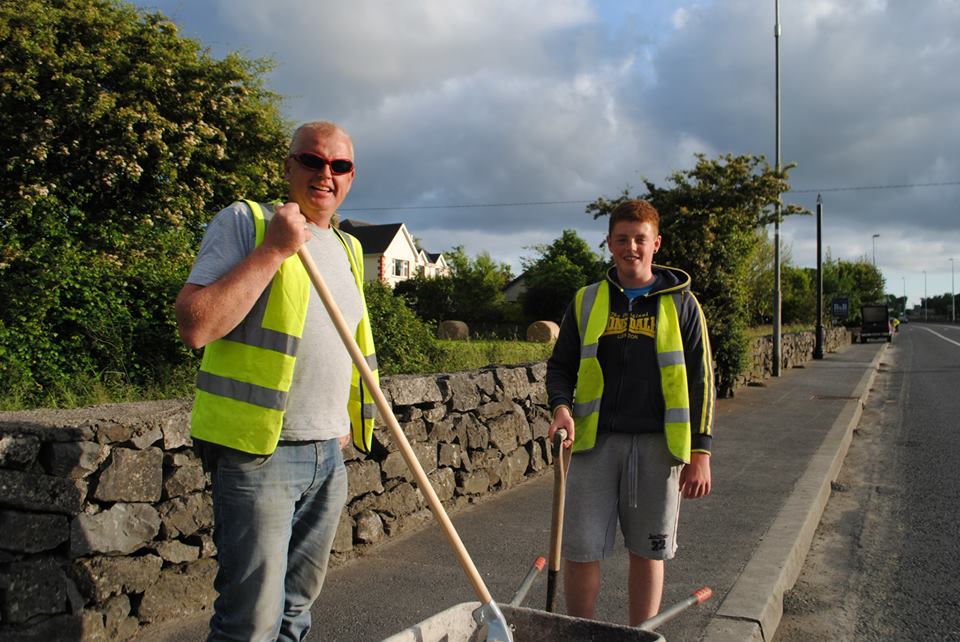 Aidan Concannon with his son Eoghan

It was observed by the adjudicator that considerable time and effort has been spent by your committee on cleaning and sweeping the road verges, kerbs and pavements in the village as the vast majority were neat and tidy during adjudication. This is an excellent performance as Claregalway is not particularly small. Further improvements are possible. For example, the prevalence of signage should be monitored as a large number of pavement signs could be found outside the Supervalu and the objects used to weigh the signs down were frequently untidy looking and served to trap litter and other debris. An untidy field was also spotted on the right-hand side of the road on the approach from Galway. Its untidy appearance stems from boundary treatment (which is in poor condition) and what looked to be old signage. A number of untidy signs and sign poles were also observed, such as the example opposite the Claregalway Hotel and some of the traffic signs spotted on the approach from Tuam. Well done on your vigilance with respect to removing unauthorised advertising and posters and we hope that the Council will improve signage as soon as possible. We also look forward to seeing your plaque highlighting the inspiration behind the spires in 2014. 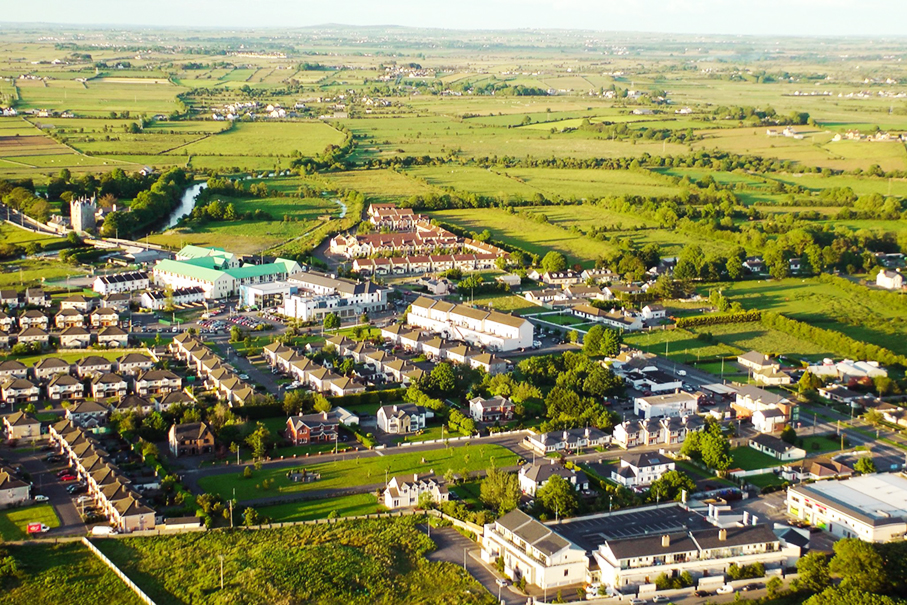 We are delighted to see that you work closely with the residents groups in Claregalway and this partnership approach is likely to yield positive results. Have you considered organising a competition for the best presented residential areas? Perhaps a local business would be interested in sponsoring a prize? There may also be a countywide competition that the winners in Claregalway can enter. During adjudication, Lake View was nice with its careful maintenance and attractive landscaping at the entrance, while the small residential area opposite also impressed. On the Oranmore Road, Slí an Bhradáin was particularly nice with very well maintained green areas, and attractive and diverse landscaping and trees. Cúirt na hAbhainn opposite was reasonable and An Mhainistir did not achieve a high standard due to weedy beds and litter visible. 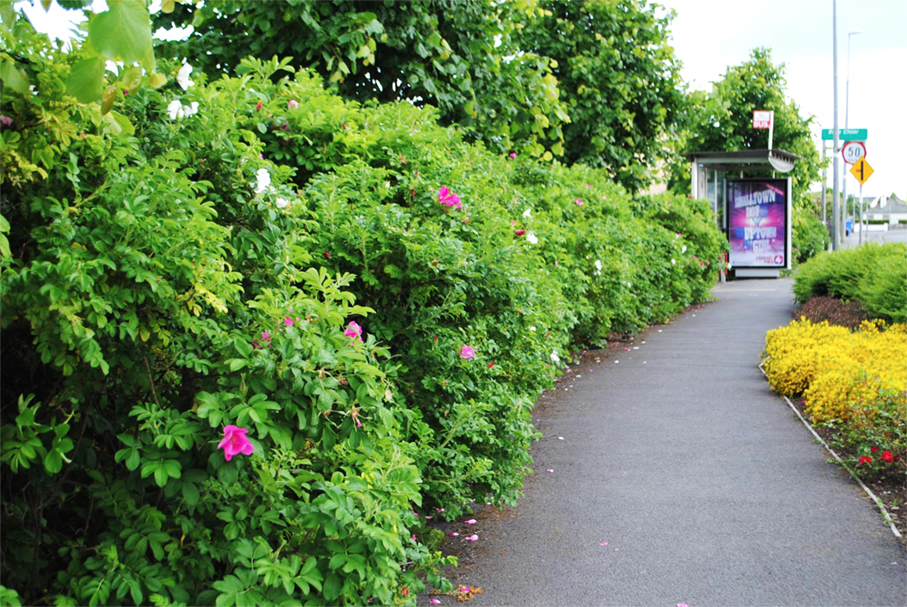