Living and working on the family farm all his life, Claregalway native Oisín Kenny has always had a passion for quality flavoursome foods grown without the use of chemicals, pesticides, and preservatives.

Mr. Kenny provides only the finest varieties of vegetables which are hand-selected for their vibrant tastes and healthy benefits, always encouraging people to try out something new.

At Hughes SuperValu, Mr. Kenny provides the finest local and affordable produce from just next door; one of the shortest supply chains one can find from farm to fork. Bia Oisín supplies Hughes SuperValu with all different types of vegetables, including tomatoes, red and golden beetroot, cucumbers, green and yellow courgettes, onions, spinach, basil, scallions, mixed salads, beans, peas, and kale, with an extended range of seasonal fruit, herbs, and vegetables planned for the near future.

Initially providing an excellent variety of local produce to Hughes SuperValu in Claregalway, the quality of his vegetables has recently caught the attention and the tastebuds of some of Galway’s best artisan chefs and restaurants with demand growing daily.

Having spent a number of years travelling, Mr. Kenny studied the growing worldwide trends of sustainable organic and regenerative agricultural methods and design-based low input methods like permaculture in England and Canada. 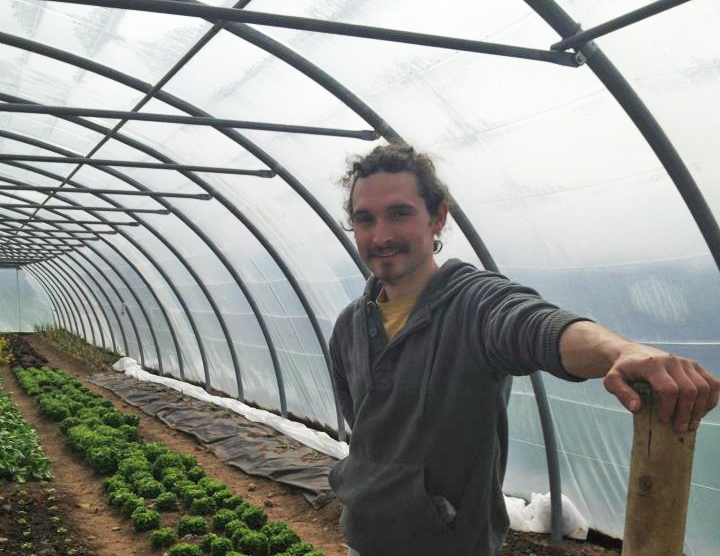 Oisín Kenny returned to the family farm in 2010 where he set about creating the Bia Oisín label as a means of supplying fresh, wholesome foods, at affordable prices. Bia Oisín is based in a large polytunnel which Mr. Kenny had installed on the farm a year ago. He has continued the old fashioned way of doing business too, picking and packaging the vegetables by hand and delivering them directly to his buyers via a special refrigerated van.

“Oisín’s produce is very popular and creates a great excitement among customers in the store.” says Eva Hughes of Hughes SuperValu. “Over the years people would be queuing up for vegetables grown by Oisín’s father John so there is a great pride and tradition there. The Hughes and Kenny families have lived side by side for generations and it really is the epitome of local.”

Oisín Kenny is the sixth generation of his family to work on the family farm and the second generation to supply Hughes SuperValu after his father, John, who has been selling a selection of locally-grown carrots, parsnips, and onions in-store for the past six years.

Bia Oisín is situated a stone’s throw away from the supermaket and it is commonplace to see John and Oisín walking in having picked the day’s supply for the store, fresh from the fields next door.