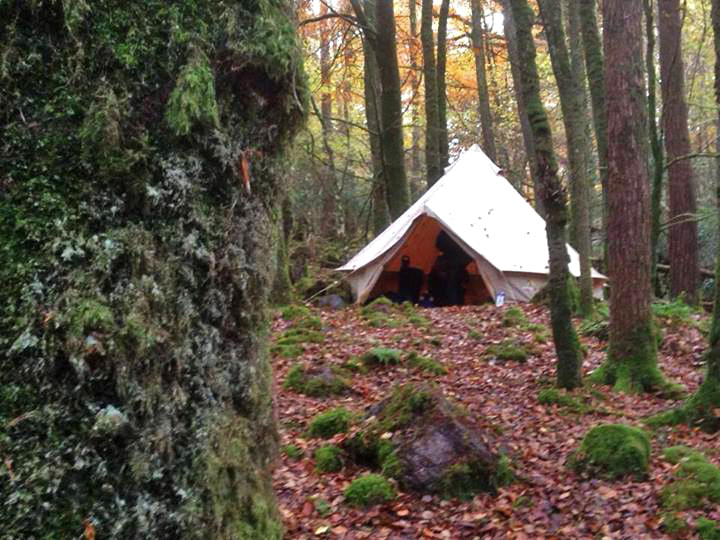 Western Bushcraft Skills is a new outdoor activity provider set up by Steven Lenihan in June 2013 specialising in bushcraft and survival skills. The 12th Galway Claregalway Scouts spent a weekend at Halloween in Cregg Castle mastering the wilderness with Western Bushcraft Skills, and wrote these reports on their adventures.

I arrived at Cregg Castle at 9am. We brought everything in, food, bags, etc. Steven told us the plan. We then made huts with string, sticks and some plastic. All the cubs made the hut together. Scouts worked in twos. We made a fire outside our hut. To cook on and to keep us warm. We collected lots of sticks to keep the fire going. We made pancakes. They were nice. We chatted and played a hiding game. For dinner we had pasta and chicken. We sat around the campfire. We ate marshmallows and biscuits. We also played games one of the games was around the world.

I had an alright sleep. We got up at 7.30am. We had breakfast. Steven showed us how to use an axe and saw properly. Steven brought us on a nature walk through the forest. We found out about all the trees and which are safe and which aren’t. We made a bridge from sticks and rope. It was stable. I walked across the bridge. We made spoons out of wood using wood embers and a knife. We brought all our equipment out and we left the forest as we found it.

Sadly I missed the first day of the Halloween Camp but when I came on the Wednesday morning it was worth it. To start with we had some eggy bread for breakfast. Then we covered hand tools (knives, saws, axes). The knives were pretty simple. The saws were tough trying to get a good swing as the blade got stuck a few times. The axes were heavy and tiring but enjoyable. We all got a turn on all of the tools. We also had to cut down a tree to make a bridge from scratch. We had to cut down a few saplings as all the trees on the ground were rotten. It took a long time but we completed it. It was a very enjoyable day.

We went camping at Cregg Castle in Corrandulla for two days during the October break. First I thought I had packed a normal amount, then I saw everyone else’s bags and that illusion was shattered!

Once we had all been settled in, we were split into pairs and made bivvies. Naturally it rained earlier so finding dry wood for the fire was a disaster, only one team succeeded. After we all deposited our little amount of fire wood at the main fire we all settled around for pancakes. Next we found lots more wood for the fire. We went on a nature trip around the forest, crossing the river and nearly losing my boot in the bog. We then played Predator which is the best game ever!

For dinner we had pasta and Bolognese sauce with cheese and garlic bread. Next we got our sleeping bags out and settled in our tents and then had toasted marshmallows. Steven told some spooky stories and we played some campfire games, did some star gazing and then we all went to bed. Well I say we went to bed, but actually the girls spent ten minutes debugging the tent. Just when I thought we had it all sorted, I shined the torch on the roof and saw the biggest spider I have ever seen… needless to say I may have screamed a little bit.

Next day after breakfast, we were shown how to chop trees. We made makeshift bridges across the river. We played some more Predator and we attempted to make spoons from pieces of wooden log, mine still looked like a log. We packed away and left for home.

My Weekend at Cregg Castle by Shane Lawless

I got up in the morning early, had breakfast. When we arrived at Cregg Castle I took my bag out of the car and went over to the other lads. When everybody came we followed Steven to the campsite. We left our bags there and started bringing in all the supplies. We went over to the river and somebody actually fell in. We made a shelter so if it rained we could go in there. I was making mine with Dillon. We collected lots of sticks. When we were finished our shelter we collected sticks for the fire to keep us warm and to cook.

We had pancakes for lunch. They were really nice. We went for a nature walk through the forest and found out about the different trees, their names, etc. and which plants were poisonous. We played games. In one of the games the person on was not supposed to see you and I was on top of a huge hill—I loved that game.

When we got back we had dinner. It was delicious! We sang songs and played games and told scary stories. We had biscuits and marshmallows—it was lovely.

In the morning we had a fry. We cleaned up and washed the dishes. We collected sticks for the fire. When everyone was finished we went into the forest and we were put in teams. Each team made a bridge over a river and everyone on the team had to get across the bridge. We went back and had dinner. It was a very wet day. Steven showed us how to use a saw and an axe properly. We carved out spoons. We then brought all our supplies home and we left the forest as we found it. 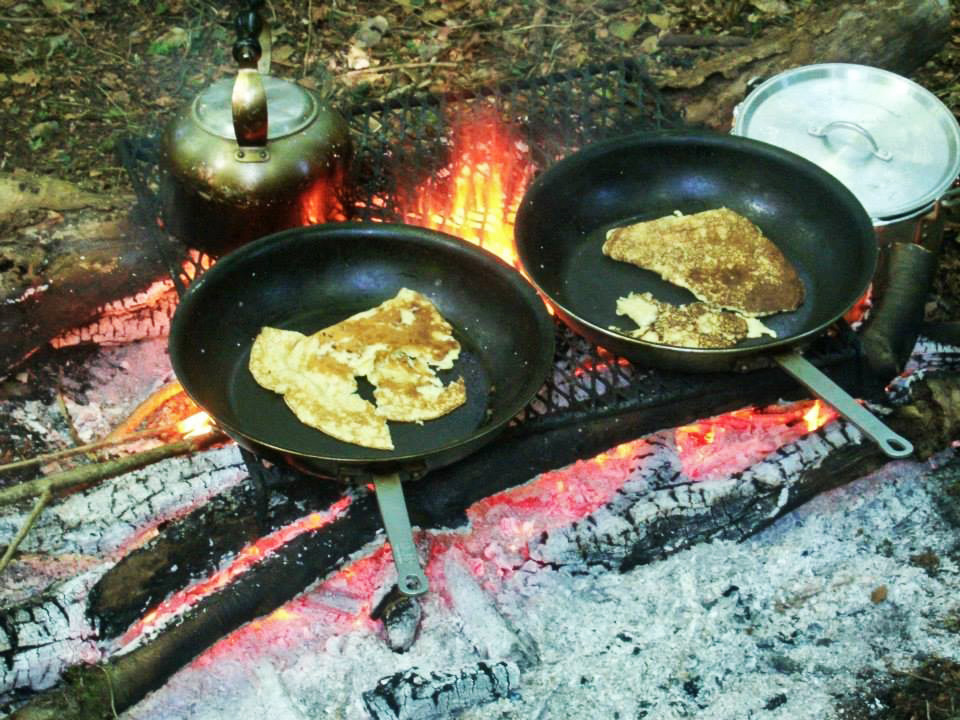