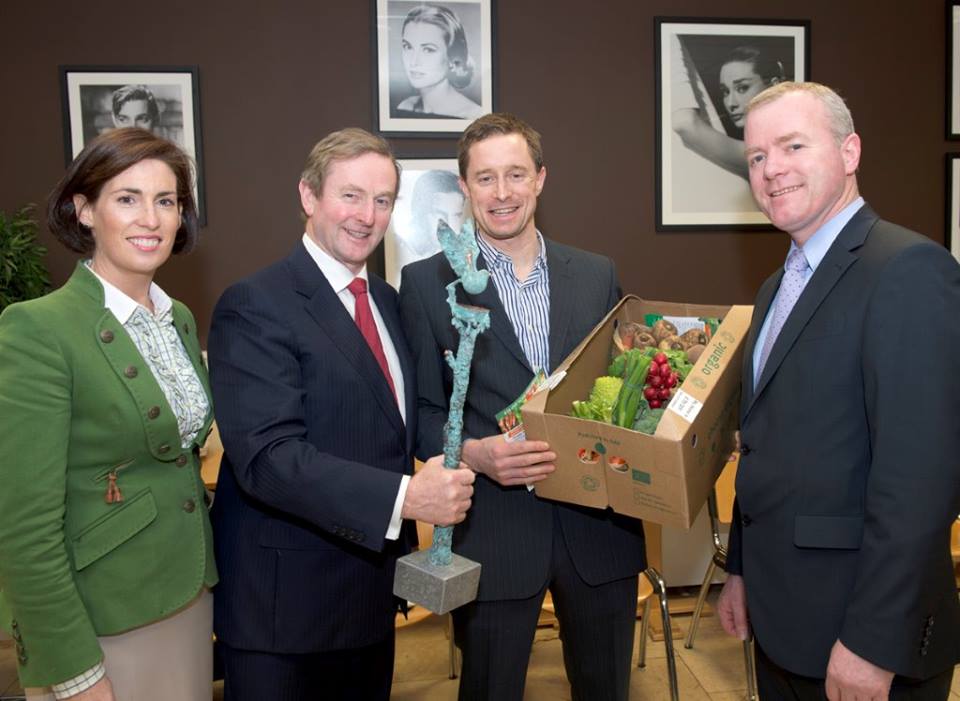 Kenneth and Jenny Keavey didn’t know “anything about farming or business” when they began delivering boxes of home-grown vegetables to friends and acquaintances eight years ago.

Now delivering produce from Mayo to Limerick, their company, Green Earth Organics last week took home the €10,000 top prize in the SCCUL Enterprise Awards, and 2014 looks like a year of further growth. 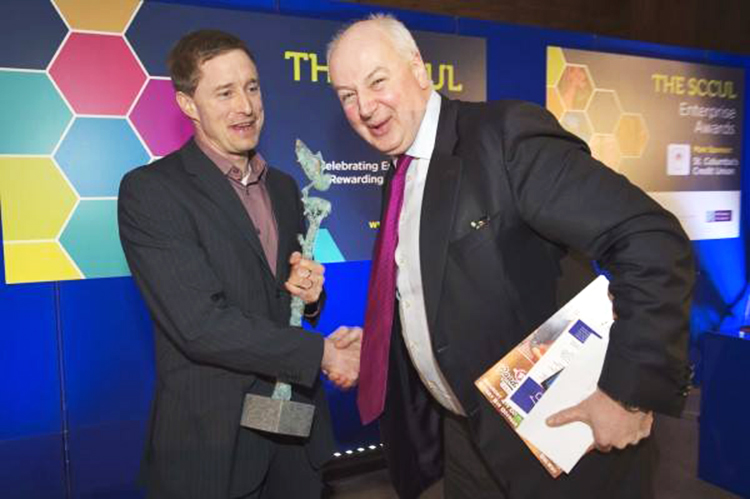 Named One to Watch at last year’s SCCUL Enterprise Awards, Green Earth Organics is an innovative company based on a traditional concept, “giving customers a convenient way to get really good food delivered to their homes”.

Mr Keavey grew up around such food; his grandfather was head gardener at Cregg Castle, Corrandulla and the thirty acre Green Earth Organics farm at Caherlea has been in the family for three generations.

He also knows about non-organic produce, having worked in the UK in the pharmaceutical industry as a senior research scientist. While the roles appear disparate, he has applied the organisational skills developed while studying for his PhD in Medicinal Chemistry at the University of Cambridge to his work, and his “deep knowledge of what chemicals do and what they can do to environment”, coupled with his passion for the environment, made him want to do something positive for it.

Hence Green Earth Organics, which delivers boxes of organic vegetables and other products to customers’s homes. “The basic premise of it is you get a delivery to your house once a week of fresh organic veg. Generally, it’s local where possible. The idea is that that will help you improve your diet; you’ll be getting fresh veg, the veg will be there, you’re going to use it, you’re going to eat more veg,” he says.

The scheme is flexible and customers can customise boxes to suit their needs and tastes. “It supports the local economy, you’re buying local seasonal food so the food is fresher, it’s better value, you’re getting the best in terms of health, nutrients and, with us certainly, what you’re getting is something you can trust, it’s good safe food,” says Mr Keavey.

Green Earth Organics currently employs eight full time and two part time staff, and is set to hire more during the year as the business expands. Mr Keavey says a strong team has helped the business succeed to date.

The company’s present delivery route covers from Westport, Co. Mayo to Limerick market and expanding there, with the intention of offering their services in Dublin in future. Much of the produce delivered is grown on their own farm but the company is also looking to contract and growing to other organic suppliers, indirectly supporting further employment.

While the company has an eye on expanding its customer base, the central packaging  facility and organisation base will remain in Corrandulla. In fact, the €10,000 case prize the company won at the SCCUL Enterprise Awards will go towards building a new packing facility there, which will help to grow the business, and towards enhancing their online ordering system.

The company has identified online sales as a key growth area. “You can see it in the UK, all the major retailers are investing heavily in their online ordering systems,” says Mr Keavey.

But direct customer interaction also remains important and Green Earth Organics sell their produce at Moycullen Market every Friday and its farm shop is open every Wednesday from 2pm to 7pm, when customers can learn about produce and how it’s grown.

“People have been disconnected from their food supply, that’s been fairly obvious in the news over the last couple of years with all the scares” says Mr Keavey. “People are so far removed from the production of food now they don’t actually know what’s going on any more,” he says, adding that social media is an excellent way to communicate to the public where their food is actually coming from.

Market prices for vegetables has also long been an issue for growers, with the Irish Farmers’s Association most recently protesting the “unforgivable” and “morally wrong” practice by large retailers of selling fresh Irish vegetables for as little as five cent per kilogram, which the group said “made a mockery” of the hard work done by growers.

“What’s happened there is food is being completely devalued to the point of view where it’s worthless.

Consumer values are very important and high on everybody’s agenda but there has to be a realistic price,” says Mr Keavey. “It costs to produce food and when you take that away, you’re telling people it’s worthless and I mean that’s sending out all the wrong messages as far as that’s concerned.”

He adds that one of the benefits of organic produce is it has to be grown according to a set of strict regulations. “Organic food doesn’t have chemicals on it, that’s a fact, and it’s grown with respect for the environment, so if you come to our farm, you will see birds and bees and all the wildlife and diversity that thrives here. If you go to other farms, you may not see that because chemicals cause damage and I know that because I’ve worked with them. I’ve worked in the industry for a long time,” he says.

Reflecting on his decision to move from the pharmaceutical industry and start his own business, he says the greatest challenge starting out was that he and his wife had no knowledge or awareness of the supports available to them, and felt that it would be difficult to access them in any case. He feels there are now more supports available to startups, and says that one of the benefits of SCCUL is the case of access it provides to mentoring, support services and any other help entrepreneurs may require.

“When you go out on your own, people will always tell you that, you’re crazy, you’re leaving a mob, why would you do that?“. It’s the sense of self-belief that you can do it that really makes the difference and there will be a lot of times when you don’t have that, but that is crucial. If you have that I think anything is possible.”

For more details on Green Earth Organics, visit www.greenearthorganics.ie. For information on the SCCUL Enterprise Awards, log onto www.scculawards.ie.