Coláiste Bhaile Chláir is running a number of science related activities this year again to mark Science Week 2014—the theme this year is The Power of Science.

Science Club is up and running with students decorating the school in Wild Science Facts and getting stuck into some slimy experiments to show the power of science. STEM and science students in Coláiste Bhaile Chláir will have an amazing start to their November term with engagement with the I’m a Scientist/Engineer Programme. This is an X Factor-style competition for scientists/engineers, where students are the judges.

Scientists and students talk in a live web chat online in a drive to change common misconceptions about what a scientist or engineer is and does. The students ask questions about the research, education, time in school and everyday life. Every day the students can vote for the professional they would like to win and after the activity has run for two weeks, the winner is announced. The winning professional gets €500 to spend on promoting and communicating their research.

On Tuesday November 18th, STEM students will log in and engage for the first time in conversation with engineers such as Laura Tobin, an optical engineer in UCD or Ashley Cubert working on reducing carbon emissions. These engineers are live on the job and excited to share their insight into STEM careers available to the students in the future.

On Thursday November 13th, we will host our second Astronomy night in the school in conjunction with Galway Astronomy Club. This is a community event and everyone is welcome from the youngest to the oldest! Celebrate all things space related with our visitor Ronan Newman from the Galway Astronomy Club. Learn how to use the telescope to view the planets and the Moon (weather permitting!). Even if it rains we will have a really interesting discussion about the Solar System and what makes the planets different.

Visit to University of Limerick

On the 3rd of November 2014, the University of Limerick welcomed eight students and two teachers from Coláiste Bhaile Chláir to an interactive workshop to explore how they are currently teaching and learning. The teachers use and create unique teaching resources at the school using Microsoft OneNote and Microsoft Office365. Students and teachers at the school use Microsoft Surface Pro devices. Students discussed their online learning with the University and highlighted the innovative delivery of education they are currently experiencing.

Dr Ingrid Hunt course tutor and researcher from the Enterprise Research Centre noted “that the emergence of technology in education have necessitated increased innovation in how we approach the delivery of courses to our students”.

“Meeting with our students of tomorrow has shown us today that we need to be equipped to ensure that when these students enter University that we continue to revolutionise and remain dedicated to their learning experiences”.

Adrienne Horan administrator and graphic designer at the Enterprise Research Centre said it “was great to meet a school that is integrating technology into the classroom and meeting students who have extra motivation to learn because they are learning outside the traditional textbook”.

“Technology is certainly changing the learning environment” according to Rob Dalton, eLearning technologist at the Kemmy Business School. Gareth Callan, teacher at Coláiste Bhaile Chláir, believes that students have an opportunity to better their learning in ways that were not possible even in the recent past. 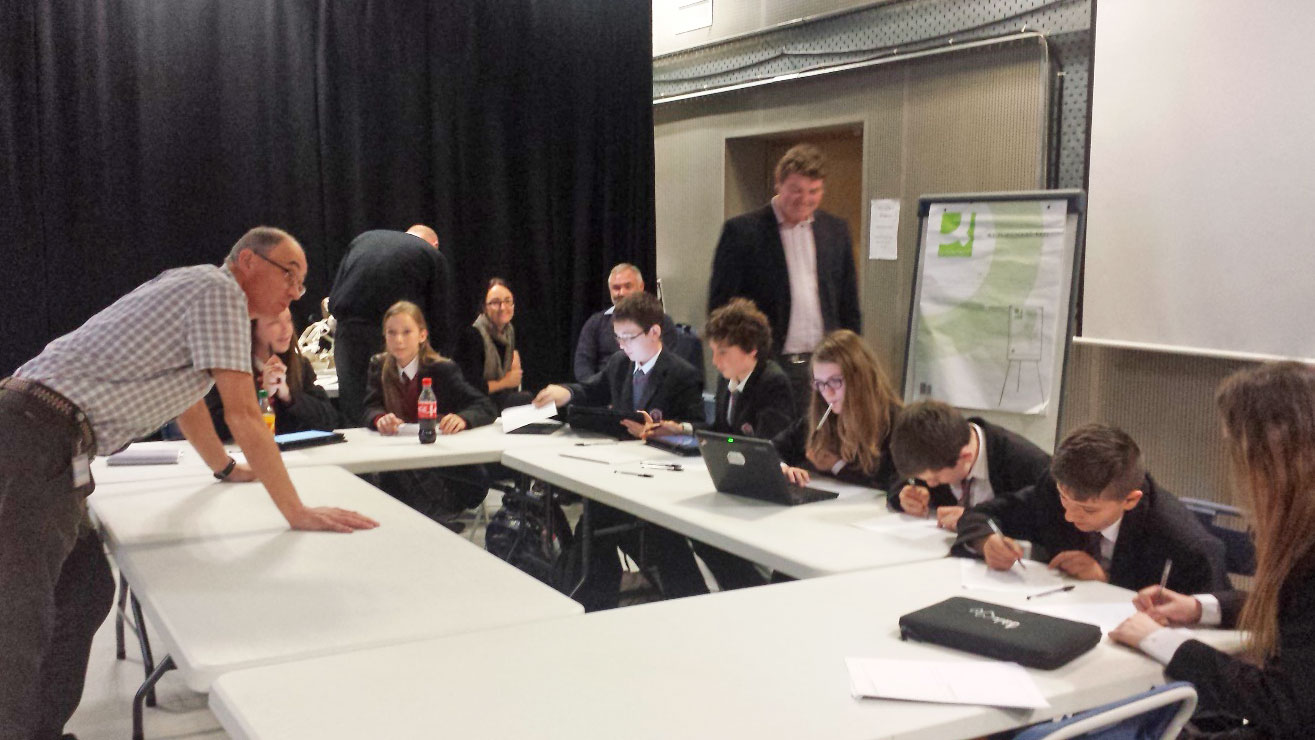 “What we want to achieve at Coláiste Bhaile Chláir will allow students to take ownership of their own learning. Students now live in the Information Age, where they have a wealth of data at their fingertips. We need to empower students to feel confident in their own abilities to construct knowledge from reliable sources. While we are still in the very early stages of this process we have had much success over the past fifteen months, and we are constantly learning of ways that we as teachers can facilitate more meaningful working relationships by using eLearning both in the classroom and outside of it”.

On Saturday the 18th of October the Coláiste Bhaile Chláir school choir and traditional music group contributed to a very successful first youth mass in Claregalway parish church. Thanks to the parish pastoral council who treated them to pizza afterwards. Looking forward to participating again in the future.

We all left at 10am and were split into two groups, one going to the Maths lecture the other going to the Physics lecture.

I went to the Physics one. The lecturer was a telling us about the salt in our oceans. He explained how saltier water is heavier and how it rises to the surface.

He then went on to tell us about his very own robot that was like a 3m pole that goes down into the ocean and is set to come back up, measuring all the salt in the water. He spoke for about an hour and a half, then we had to walk from that lecture hall all the way to the other side of the campus where we had a lecture in IT.

The lecturer talked to us about the history of technology and about the early creators and inventors of the first computers which would take up whole rooms compared to modern day ones which could fit in your pocket. He also told us about Raspberry Pi, that is a little computer that is used to start people off with simple coding.

Once that lecture was over we all piled back on the buses and headed back to school.

We went to NUIG on Friday two weeks ago. It was an enjoyable experience. All the first year forms went on buses to get there. The bus I was on was buzzing with chatter about what we would do there. When we arrived we were led to a massive lecture room, filled with rows of seats. We all scurried to get seats. The lecturer was standing on a sort of stage. There was a sort of wooden table with a laptop and projector on it, on the stage. He stood by this until we all hushed and started listening attentively. He paced up and down the stage as he explained his job. He was a scientist who studied the levels of salinity in the ocean and how it varies in different places and how he had to travel around parts of the world on a boat to do so. He talked about it for a while and then showed us a slideshow of pictures to give us an idea of what it was like to be at sea and asked was there any questions.

It was soon time to move on to the next lecture, where we were told about IT from a new lecturer. We were a bit squashed because all of the first years were attending and there wasn’t room for us all. Apart from that it was fun. The lecturer told us about the first Apple computer and people like Steve Jobs and his ideas. He also told us about coding and how it created Google and other sites. He explained that without coding we wouldn’t be able to further our ability to use technology. He told us that the world needs a new generation of coders and that we all had the potential to become great coders and to create new computer programmes and it was really inspiring. Then he showed us a video of what life would be like it everyone wore Google glasses which was the highlight as it was so cool.

The first year soccer team got off to a winning start in their U14 Cup competition with a 2–1 victory over The Bish before the mid-term break. It was a great team effort and hopefully they can continue their winning ways in the next game now.

The U15 team are playing their first game against Pres Athenry today (Thursday) in Cregmore and hopefully they can get off to a good start as well.

Well done to Sinéad Donovan and Andrea Trill who made the Connacht U15 schools soccer team.

The Mairéad Meehan A camogie tournament was held in Killimordaly on the 23rd of October. Coláiste Bhaile Chláir were successful in their group games against Seamount and St Brigid’s. They then went on to beat the Pres Athenry in the semi-final. The final was a replay against Seamount. 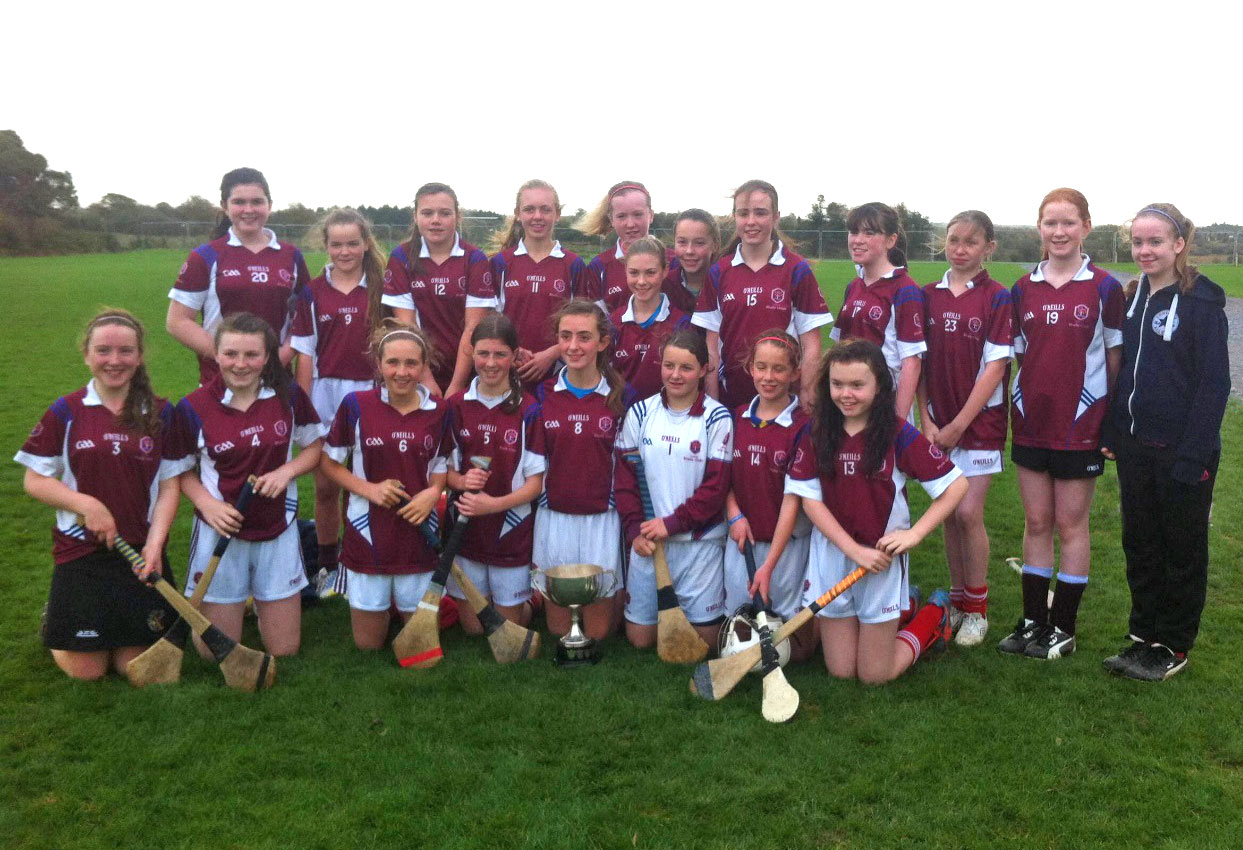 They had an excellent nine-point win in the final with outstanding performances from each and every one of the girls. The captain for the day was Rachel Hughes who showed excellent leadership throughout the day. Hopefully this is a sign of more to come.