Dozens of parents across Galway are being denied vital services that will teach their special needs children basis life skills to help them to sit up, eat and get dressed.

The major worry for parents is that if their children do not receive this intervention when very young and at a time when their brains are literally like sponges they will never attain any sort of independence.

With a significant number of occupational therapy posts vacant in the country—there is a decrease in five years of over five full-time therapists to just four—parents are being told in some parts of Galway the only service they can receive is help with seating.

The occupational therapist’s role within Early Intervention Services is to assess a child’s motor skills, attention span, organisational and perceptual skills and work with the parents to draw up a list of goals they can work towards.

Children with autism, physical disabilities and genetic disorders need to be taught how to achieve everyday tasks such as dressing, eating, handwriting and even playing. Even the most simple communication for some kids can be impossible unless they learn how to use their hands.

That is something Angelina Hynes from Carnmore knows all too well. When her three-year old daughter Zoe screamed incessantly for days she brought her to the hospital where medics carried out dozens of tests unable to ascertain the cause of her pain. It turned out Zoe had simple mouth ulcers but this was not discovered before she had spent eight weeks in hospital. 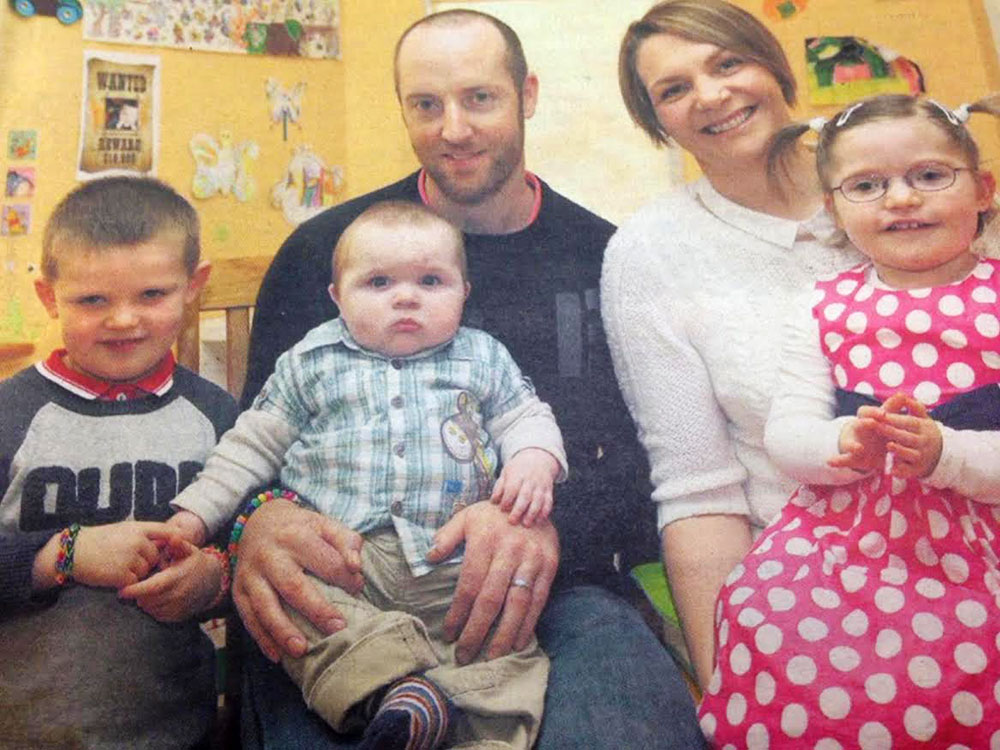 Angelina Hynes with Zoe on her lap, joined by her husband Shane and their sons Gavin and Dylan.

“She couldn’t tell us what was wrong with her because she doesn’t know how to point. If she could communicate with us she wouldn’t have need to be there costing thousands of euro and taking up a bed. We went to A&E seven times over the period.”

Despite pleas from her parents that all was not well, it took until Zoe was eighteen months old for a specialised genetic test to diagnose her with Pitt Hopkins Syndrome.

It is characterised by a severe developmental delay, almost no verbal skills, anxiety, intermittent hyperventilation and sleep apnoea. It is thought to affect just eight children and adults in Ireland.

Up until she went to a special needs pre-school, Zoe was seen under the care or early intervention services in the East and South Galway Network.

The occupational therapist there would see Zoe every two months for an hour and would liaise with other therapists such as physios and speech therapists to ensure progress was ongoing.

“She would look at seating and do a bit of fine motor skills around her hand movements, sensory processing—because she has a very heightened sense of smell, touch and hearing—and work on her perceptual skills—how she perceives the world. Her exercises were very simple, like blowing bubbles and getting her to pop them,” explains Angelina.

While progress has been mind-numbingly slow, Zoe was achieving significant mile-stones. It took her two years of physio to get her from lying down to sitting up.

She picked up her own bottle and fed herself for the first time last January and now manages to put her dummy into her mouth.

When Zoe was moved to the Galway City West Network within the Early Intervention Service on her enrolment in the Burrenview Child Development Centre run by the Brothers of Charity things changed dramatically.

“We were told the priority at the moment is seating, tube feeding and legal requirements such as an assessment of needs under the Disability Act. They said there’s nothing else. They’re not teaching them the skills for life,” recalled Angelina. Other parents whose children are attending Burrenview have been told the same story.

“If we don’t get that input now, there will be no further output. The earlier and the sooner we intervene, the better chance she has of reaching her full potential,” insisted Angelina.

“Zoe has no pinch or grasp that will help her communicate, maybe one day in the future use a computer. She cannot spoon feed. OT’s could teach us how to keep her stable, how to keep her grounded. I can do her physio but I need to be shown what’s the next step as she gets older. She needs this desperately.”

A spokesperson for the HSE said since 2009, an inter-agency partnership between the HSE, the Brothers of Charity and Enable Ireland has been responsible for the delivery of services for children with complex needs in Galway.

Under this arrangement five multidisciplinary teams were formed to serve Galway city and county to improve equity of access across the county. There are currently 435 children accessing team-based interventions in two city centre and three county based locations.

Access to occupational therapy is based on “the prioritised needs”, she stressed. “In the intervening five years, staffing has reduced to 4.25 WTE (Whole Time Equivalent) posts) due to statutory leave and vacancies not filled due to financial constraints.

“In line with the position outlined in the 2015 HSE National Service Plan, we will be reviewing how OT staffing within Early Intervention Services might be maximised with funded levels.

“Available resources are shared as equally as possible across all teams with criteria for access to service prioritised on clinical need. Available staffing in any given area is impacted when statutory leave must be granted or where vacancies occur. Resources are reallocated where possible to promote equity of access.”

Angelina and her husband Shane also have two other boys. The family receive funding from the Jack and Jill Foundation for Zoe for eight hours of care a week and they also receive three hours of intermittent respite from the Brothers of Charity.

It took a momentous battle to receive a medical card for Zoe and Angelina says they will continue to fight for everything that Zoe needs to be the best she can be.

“We all have aspirations for our children, what’s happened with Zoe is they’re different goals—and possibly more rewarding when they’re achieved because we know how hard got they are,” reflected Angelina.

“I believe my daughter deserves the best and while I’ve a breath in my body she’ll get the best.”