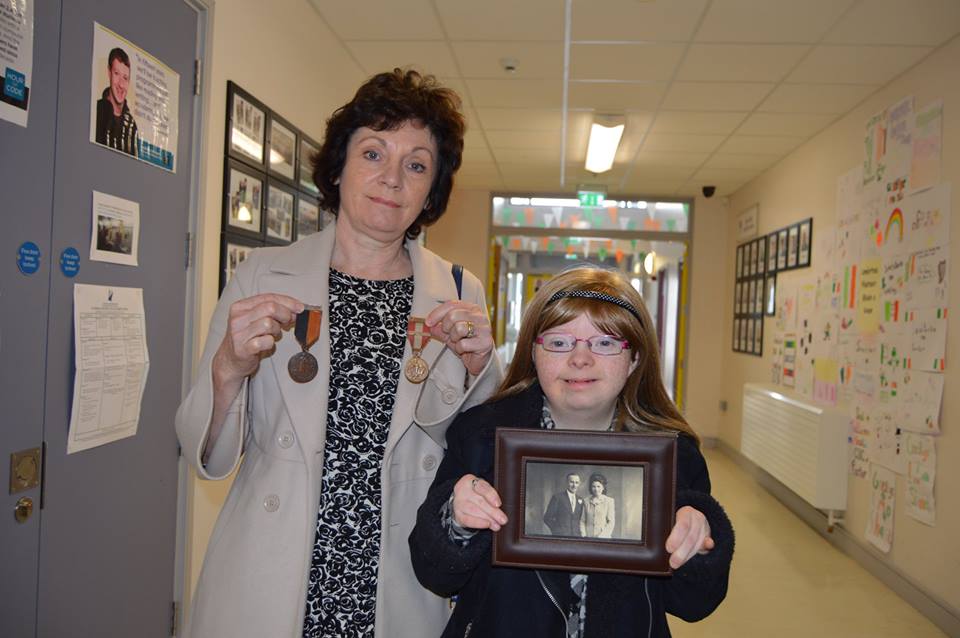 The medal bearing the black and deep orange ribbon with an imprint of an armed soldier reads: Éire, Cogadh na Saoirse (Ireland, a fight for freedom). This was presented to my father for his part in the War of Independence from 1916 to 1922. He was educated in St Jarlath’s College Tuam and was active in Óglaigh na hÉireann during his teens graduating to the Irish Republican Army (IRA) from 1918 on. He didn’t take up arms on account of his youth but was involved as a Runner bearing messages between different IRA cells often at great risk with the West Mayo Brigade.

He was born in a time (1903) when Ireland was occupied and ruled by Great Britain. The executions of the leaders of the 1916 Rising in Dublin ignited the flame of patriotism and Irish people began to seek political & economic liberty in earnest. It was impossible to take on the might of the British Empire as the Irish were largely poor and without weapons. However other means of achieving independence were sought. One of these methods involved the burning of the unoccupied RIC barracks in case the British reoccupied them to stockpile their arsenal. Michael Higgins with other local IRA members burned down the local RIC barracks in Ballyheane in 1920 to prevent this. This order had been given by GHO in Dublin and at least 300 RIC barracks across the country went up in smoke round this time.

Afterwards he took off like Fionn Mac Cumhaill across the fields to the hayfield he had been working prior to this on his uncle’s farm to avoid arrest when the RIC backed up by the dreaded Black & Tans came to investigate from Castlebar. The IRA was a secret organisation like the Irish Republican Brotherhood and the Fenians before them. This was of necessity in those turbulent times and to be a member was a dangerous occupation. You ran the risk of arrest, torture, imprisonment and ultimately execution. But their spirit kept the fight for freedom alive. Most young Irish people ran that risk in those times, my father included, so that today we all can live in a free, independent Republic nation.

The second medal bears the inscription, Seirbhís Náisiúnta Ré na Práinne An Fórsa Cosanta Áitiúil 1939–1946 (National Service The Emergency, Local Defence Forces) hanging from a striped but faded red and white ribbon. In our independent state it was necessary to defend the homeland during World War II or The Emergency as it was known in neutral Ireland. This is an earlier issue having only one stripe and was awarded for two years service with a bar added for a further two years service. Michael Higgins was the Officer in charge of the local battalion in Ballyheane. The FCA were set up as a part time force to take the place of the regular army as required. They were like a continuation of the Volunteers from the 20s.They had uniforms and were trained. They held regular parades. Their duties consisted of traffic control, communications, protective duties, transport and First Aid. They also assisted in searches for reported parachutists, missing persons and crashed aircraft.