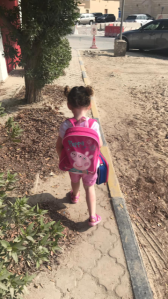 Nearly eight years ago when my blue-eyed boy was born, I was working in the office at the school enrolling children of the age of the 3 into their first year in formal school. Aghast at the sight of the dummy and blanky and nappy being swiped from the child and they being stuck in a uniform and saddled with a school bag of tracing sheets, I revelled in the sure-fire knowledge that my baby to be would never that boy, he would safely back in Ireland, starting school around 5 and a half, not a minute too early.

Eight years later, he’s in year 3, having completed nursery, reception and years 1 and 2. It was a compulsory start by the state of the Qatar and a reluctant one by me, who placed more value on counting clothes pegs in the morning with mammy, than being reprimanded for colouring outside the lines. I sucked it up, thinking to myself, never again…. but now I’m smack bang in the middle of the enrolment process with my baby girl, who just turned 3.

First thing to realise is that school places in Doha are like hen’s teeth. If it weren’t for the notion of one school being better than another, the places themselves might feel a little more available. Within top 5 schools there are a glut of applications and getting your prince or princess into one of these academies is paramount in the eyes of the competitive expat. Private English Schools, that’s the market and every ambitious Indian, Egyptian, Filipino is on the bandwagon, shunning their own schools for the best of British, making the British school places a hot commodity, increasing the demand and raising the standard and of course, the price.  So, this time of year in Doha, all eyes are on the waiting lists and who’s likely to get enrolled and who isn’t. Having jumped through the application stage before with my son, sibling applications were open for my little girl. Generally considered a back-door entrance, bypassing the red tape of a ‘cold application’ I rocked up to the school to fill out the form and enrol her for September.

But my thinking of an enrolment process was a presumption. It may be such if we were back in Drinagh, Dunmanway or Donoghmore, but here in Doha, there were a few steps to follow first.

Step 1, fill out the sibling application form, making sure to provide a passport photo with a blue background and the child’s non-smiling but not grimacing face perfectly positioned in the frame. Also, the Qatar ID number, full history of vaccinations and copy of original passport. Oh, and Eu.60 please.

Step 2, get a call for an assessment of the child’s ability to hold a pencil, recognise shapes, numbers and letters, recognise their own name, display fine and gross motor skills and if possible, show a keen interest in the arts, Eu.145, please.

Step 3, option 1: Get refused admission after either step 1 or step 2.

Step 3, option 2: Receive a place on the waiting list and advice on applying to other schools.

Walking into the assessment, I won’t lie, I could see the value of not winning first prize, I was willing to consider the benefits of a providing my child with a Sri Lankan education for a 10th of the cost of a British one. I had also resolved, when looking at my little girl who en-route to the assessment had decorated herself with shimmer and shine stickers and helped herself to a faceful of my lipstick, that not receiving first prize might be a very real option.

Alongside, two other girls, Menna and Aisha, Emer was led to the assessment room. Menna and Aisha had tight pigtails and held pencil cases, Emer had a haze of lipstick from being rubbed off with a dry tissue…. and no pencil case.

The assessment room door closed and the results were not disclosed. And so begins the waiting game, are we in, are we not, and are we better off counting clothes pegs out the back until five and a half anyway!