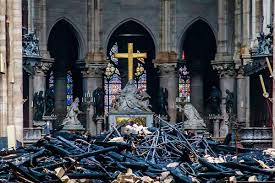 As reports flood in about the Notre Dame fire which has left people saddened all over Paris and indeed Europe. For me, there are two take away items, one, the global and palpable relief that it was not a terrorist attack and two the absolute outpour of pledges of wedges to restore the Cathedral.

The relief that it wasn’t a terrorist attack can only be described as a sad indictment of the world we live it that the minute we hear of catastrophic accident such as this that we immediately assume that it was a man with an agenda that caused it and not god or a faulty cable somewhere in the lift shaft.   The threat of the former far outweighs acts of god or faulty cables, because our biggest fear these days are each other, whether online or in person. God be with the days, we spent indoors looking out at thunder and lightning afraid it would hit the house, these days repossession is the biggest fear for the house or someone calling to the door to offer some scam or other, which is, perhaps more favorable than a full-on violent robbery.

Cathedrals are nothing new to us. There’s a Cathedral in Longford now.  Every member of a parish in Ireland has at some stage fundraised for the ‘roof of the church’ and we didn’t have L’Oréal, Francois-Henri Pinault or Bernard Arnault throwing in a few bob in at the gate on Sunday morning to help the cause either. Not a chance. We had race nights in the local pub, table quizzes, raffles, fashion shows and family fun days. And for the patrons that prayed in them, christened their kids in them, made holy communion and confirmation, got married in them and were laid to rest in them it was much appreciated.

The media is awash with news of the gargantuan offers but we’re well used to billion euro figure sums, it might be enough to build the Notre Dame with treated timber, sculpted stones and hand painted frescos in France, but a billion is nothing to Ireland, we’d need at least 1.75 to build a hospital, that’s with no archaeological considerations or historical restrictions. The astronomical pledges are the byline to the Notre Dame Fire headline and no doubt the underlying pressure felt by the big players in France to engage in a bit of corporate social responsibility in this high-profile case is one the top of every marketeer’s to-do list. But why? Because beauty sells that’s why. And there was/is nothing more beautiful than the Notre Dame Cathedral, fact that it was a place of worship was besides the point, it was a tourist attraction, a monument, a building of architectural beauty, a symbol of the breathtaking power and wealth of faith that is overwhelming when you visit such places as the Notre Dame or the Vatican.   Making the Catholic Church looks sexy, appealing and there’s a stink of cash when your there, reassuringly expensive, just like a Louis Vuitton shop.  Forget the crown of thorns and relics inside, the building itself stood for what people want to believe the Catholic church is, mighty, great, worthy. Symbolism at its best.

Take away the rose window, the beautiful towers and the organs and see how many would pledge millions then. I don’t see L’Oréal springing for the investigation into the Tuam Babies investigation, or Disney giving 5 million to the victims of Bessborough Mother and Baby Homes, these are symbols of the church too, without the embellishments. Worth noting that while the billionaires of the world are quick to offer funding for the Notre Dame re-build, the Vatican have issued a statement saying that they’ll help with the restoration but have not assigned a monetary figure to that help, this perhaps the smartest PR of all, because if they pledged money to re-building a thing of beauty as eye candy for the eyes of the rich, it might cast a shadow on all the other worthy church related causes around the world, compensations claims and church roofs that have more significance to the poor than the rich..

Sad to see a beautiful building fall victim to a fire, but nothing money can’t mend.