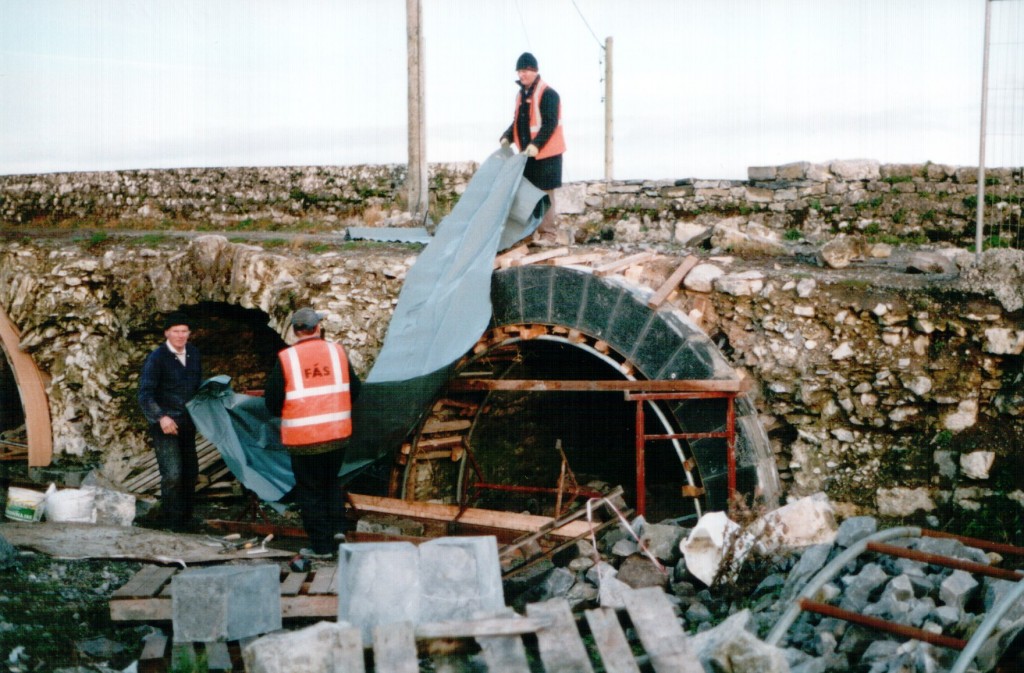 The Nine Arches
In all their glory.

Across from the Friary and near Claregalway Castle is the bridge over the River Clare. It was first mentioned in 1349 and was a wooden structure. The bridge of the Nine Arches was erected in stone probably in the early eighteenth century. In 1765 John Bodkin, a landlord from Lackagh, changed the course of the River Clare and diverted it away from the old bridge in order to improve the drainage of the area, but also to deepen the river to make it navigable up to Tuam. The present bridge, built in the early 1950, replaced Bodkin’s one and a record of his work is preserved on two stones in the wall of the bridge.

Claregalway Amenity Group have undertaken the challenging task of unveiling the Nine Arches.

Phase I has been completed in conjunction with Galway County Council. This involved the clearing of the arches. With money allocated from Councillors notice of motion funds we were able to complete this phase. We thank Senator Jarlath McDonagh, Councillors Paddy McHugh, Deputy Padraic McCormack for their prompt response for funds towards this project.

Phase II involves the restoration of the 9 Arches in which the FÁS workers will be specialy trained in restoring the stonework under the aegic of supervisor Tom Cullinane. Councillor Seamus Gavin has confirmed he will allocate notice of motion funds towards this phase. His gesture is much appreciated.

Phase II will be a time consuming and expensive process. We are currently finalising costs in this regard in liaison with our local architect Geri McManus to whom we are deeply indebted for her commitment and expertise.

A sincere thank you to Area Engineer Diarmuid Croghan who helped us get this project initiated. His co-operation and commitment is deeply appreciated. Thank you to Colm Wallace of Galway County Council who is a constant source of inspiration to us, to Sean Connell, Area Foreman, thank you for your continuous help on the ground.

Our Group are very enthusiastic about this project and look forward to having this historical structure back to where it belongs—within its monastic setting.

Further updates will be given as the project proceeds.