The work on the bridge is nearing completion. In 2001 the team concentrated on works to the ground surface and hard landscaping. The cut stone steps at the north end of the bridge were completed and look very well. Repairs were made to the triangular cut stone breakwaters on the east face of the bridge. These repairs were done prior to the finishing of the ground surface, and though much of the work is now covered up, it was correct to do the repairs in stone, as, in the future, they may be exposed again as part of a more ambitious landscaping scheme. 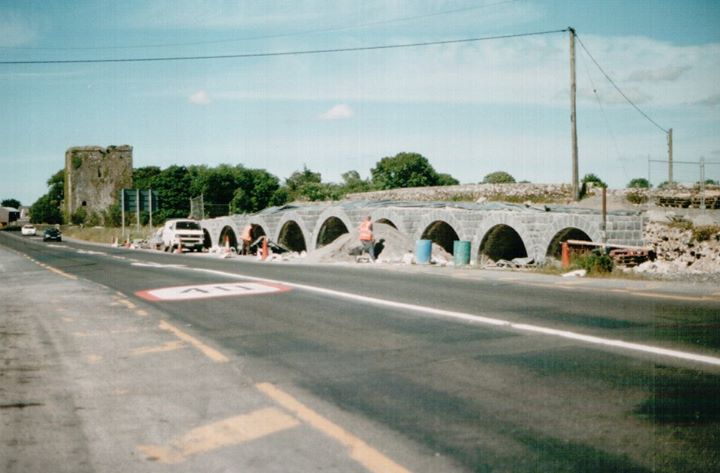 The treatment of the ground surface was kept very simple, due to cost restraints and some concerns of Galway Co. Council about safety. The finished surface is stone chips, and the differences in level are accommodated using gentle slopes. However, although the original plans for steps between a low level under the middle arches and a higher level at the sides had to be abandoned, nevertheless, consideration was given to how the ground should slope, and the stone work at the base of the arches has not been obscured.

The provision of recessed flood lights at ground level by Galway Co. Council is very successful. The highlighting they provide at night is very attractive.

Bollards have been placed along the front of the arches by the Co. Council to stop traffic encroaching on the area. A low stone wall was originally planned for but unfortunately cost was again a factor.

The street furniture, seats and a bin which are now in place enhance the area, and protective railings and handrails are planned at the steps. Western Ironcraft are looking at the design for these at the moment.

As the project nears completion, the several FÁS teams and many others who were involved in the project are due congratulations.