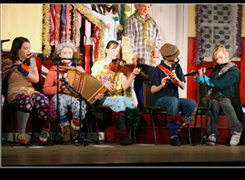 The Rambling Mummers comprising performers from many Parishes throughout East Galway, and organised by local New Inn girl Claire Smyth, took Senior Honours, while Lackagh dominated the Junior Competition at the Annual Mummers Festival in New Inn last week-end.
Despite the bad travelling conditions, the Leisure Centre was packed for this rescheduled event, which had to be reduced to a one night event this year.
The Senior winners, the Rambling Mummers, produced a strong, professional and entertaining show, to shade the verdict over a really good Lackagh Group. Newcomers Fohenagh took took third prize, and won many admirers for their entertaining performance.

Sacra Furey of Lackagh took the Best Flute Player Award while the Best Singer Award went to Megan Lohan of the Fohenagh Mummers.

Francis Fahy of Lackagh was the Best Storyteller at the Festival, while the very versatile and energetic Eugene Hession took the Sean dolan Perpetual Trophy as the Most Outstanding Entertainer.

The Junior Competition was an all-Lackagh affair, and patrons were treated to a wonderful exhibition of music, song, dance and story-telling by their two excellent groups.

The Star performer was Emer Whelan who took the Best Junior Musician Award and the Best Flute Player Award.

The Best Dancer Award went to Aishling Larkin, while the Best Singers were Louise Naughton and Isobel Moran.

The Storyteller Award went to “Jedward”- Colm Fahy and Shane Dunleavy-and the selection by the adjudicators of Damian Burks as the Most Outstanding Young Entertainer was indeed a popular one.

Closing the Festival, Chairman and Compere Michael Mullins thanked the loyal patrons for their tremendous support over the past 32 years, and welcomed the many people who were attending their first Festival.