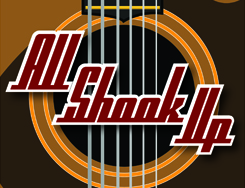 Loosely based on Shakespeare’s “Twelfth Night” with book by Joe DiPietro; “ALL SHOOK UP” features and is inspired by the music of ELVIS PRESLEY®. The action takes place in 1955 telling the story of Natalie a small town girl mechanic with big dreams and Chad a motorbike riding, guitar playing stranger she falls for. Set against a backdrop of prohibition enforced by matriarchal Mayor Matilda who bans loud music, dancing and any behaviour that might be deemed provocative including ‘public necking’.

The townspeople rebel against Matilda’s rules spurred on by music launching a series of hilarious romantic subplots including Natalie disguising herself as a man (Ed) to be closer to Chad whilst Chad and Natalie’s father Jim pursue the sultry Miss Sandra who in turn falls for Ed. After much comedic confusion, everything is resolved and Natalie realizes her true dream…

As ever the LMS chorus will be at their all singing all dancing best belting out classic numbers including “Heartbreak Hotel”, “Blue Suede Shoes”, “Jail House Rock”, “Burnin’ Love”, “Devil in Disguise”, “Can’t Help Falling in Love” and of course “ALL SHOOK UP”.

So dust off your “Blue Suede” shoes and rock along to Turloughmore Social Centre on Feb 27th, 28th or March 1st. Admission for students and seniors is €10, adults €12 with all performances commencing at 8:30PM. For advance or group bookings contact 086 603 4422 (outside office hours). 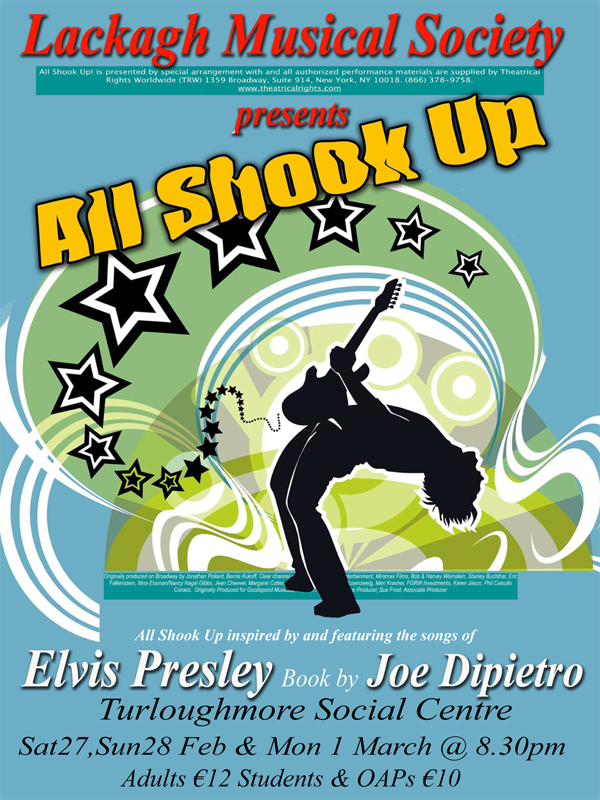 Lackagh Musical Society was founded 20 years ago by a group of musical enthusiasts in the community. The aim is to harness the depth of music, drama and dance talent in the area by providing coaching and an opportunity to perform.

The society has staged 17 productions in various venues including Turloughmore Social Centre, Taibhdhearc na Gaillimhe and the Town Hall Theatre including the Western premieres of “42nd Street”, “Crazy for You”, “Copacabana” and “Singin’ in the Rain”. Lackagh Musical Society’s 2008 production of “Joseph and the Amazing Technicolor Dreamcoat” was an artistic and commercial success and we look forward to similar success for our 17th production “ALL SHOOK UP”.

As the Galway hinterland expands, small rural communities such as Lackagh have grown also. Our membership includes performers from Lackagh, neighboring parishes and some who commute the short distance from Galway. However, what is truly unique about LMS is our production team – every member of the team offer their services on a voluntary basis including director and musical director, choreographer, stage management, wardrobe, make-up and front of house. This ensures that ever cent raised is used to support the production and thus musical theatre in the community. We are the only amateur society in Galway with this truly voluntary framework!

Below are some photos from behind the scenes of ‘All Shook Up’, Photos by Joe O’Shaughnessy reproduced with the kind permission of the Connacht Tribune.