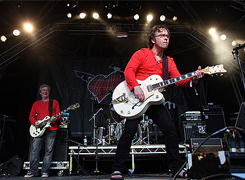 The Saw Doctors are putting the finishing touches to their new album at the Westmeath recording studios once used by Michael Jackson – and they are making the final preparations for their first Australian tour in 17 years.
The band are completing their new studio album, the succinctly titled The Hazard is back in The Cellar and other modern love stories, at Grouse Lodge in Co. Westmeath with producer Phil Tennant – the lads are finalising the tracklisting and mixes for the new Saw Doctors album which has now been fully recorded.

Then it’s off Down Under for the March tour of Australia by The Saw Doctors, where the band will play eleven shows, including three performances at the famous Port Fairy Folk Festival in Victoria.

On St. Patrick’s Day, March 17th, The Saw Doctors will play the Metro venue in Sydney.  Other major Australian cities on The Saw Doctors itinerary include the opening concert in Perth at the Fly by Night Club on March 4th, Melbourne’s Corner Hotel on March 11th, The Gov Club in Adelaide on March 18th and finishing up in Brisbane at the Hi Fi Club on March 19th.

The March tour by The Saw Doctors will be the bands first trip down under in seventeen years – back in 1993 Guinness invited the Tuam band over to Sydney for the cities Oyster Festival.

Even getting to this point has been a massive achievement for the band given the lack of infrastructure they have on the other side of the world – and the time difference involved between Ireland and Australia.

“Three months ago The Saw Doctors had no Australian agent or no Australian record company to distribute their Shamtown CD’s and DVD’s.  Following multiple emails to many diverse contacts down under, The Saw Doctors are now represented in Australia and New Zealand by the leading Melbourne agency, Premier Harbour Agency,” said Saw Doctors manager Ollie Jennings.

Using only email and social networking sites (the band have 22,000 friends on their Facebook site), The Saw Doctors and their own Shamtown Records have landed a top Australian music agent to book their eleven shows in March, a leading Australian music promoter to produce their Sydney, Melbourne, Perth and Brisbane shows, and they have licensed their “Best  Of” CD to the Australian division of the Multi National Record Company, Universal Music.

Universal Australia will release  To Win Just Once, the Best of The Saw Doctors throughout Australia on Friday February 26th, ahead of the eleven date Australian tour.

The Best of The Saw Doctors CD has recently been awarded Platinum Status in Ireland by the Irish Recorded Music Industry.

Aside from their trip to Australia, the band is also looking forward to their album release here in June, and they have already confirmed major summer festival appearances in Norway and Switzerland for July and August.