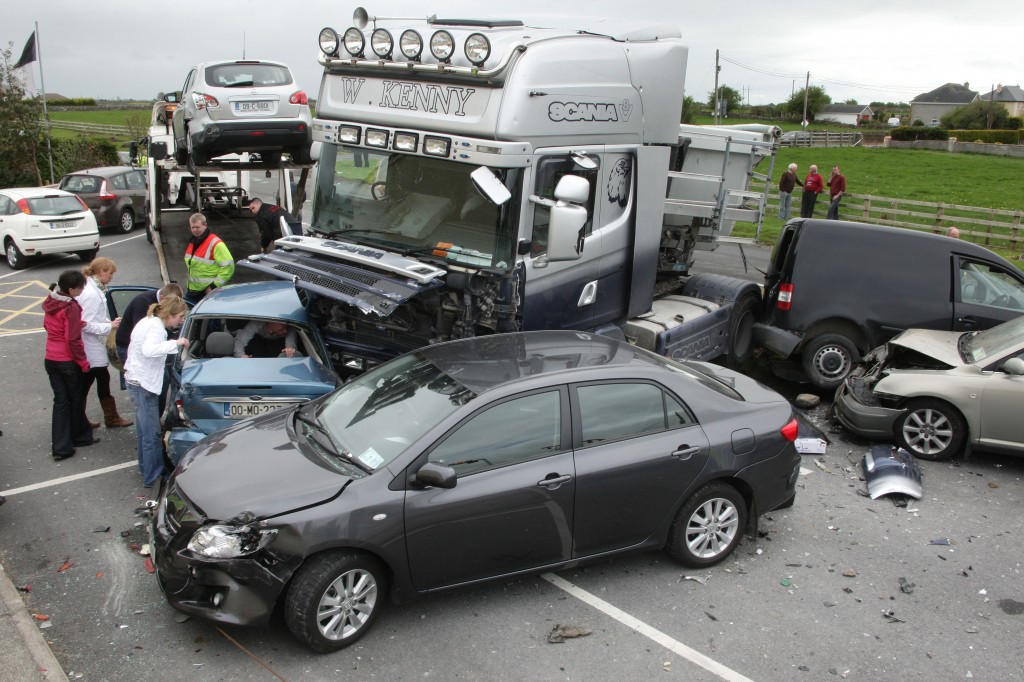 Seventy County Galway children had a miraculous escape at lunchtime on Wednesday after a large truck lost control and crashed into the school yard where they were waiting to be collected by parents.

The junior and senior infant students of Cregmore National School and some of their parents looked on helplessly in horror as the truck shuttled towards them—the lorry left the road and ploughed through the school yard wall, battering eleven cars before it was brought to a halt.

Incredibly, nobody was killed or seriously injured in the collision, although at least five children and adults were taken by ambulance to University Hospital Galway where they were treated with minor injuries.

The school is located at Cregmore crossroads, a notorious accident blackspot, and principal Joe Kennelly told the Galway City Tribune this week it was a marvel that no child or parent was hurt.

“It was absolute mayhem and I don’t know how nobody was seriously hurt or killed; I never saw anything like it in my life—it’s the miracle of Cregmore Cross,” he said.

The dramatic crash happened at 1.42pm just two minutes after children had left class to be picked up by their parents.

It is understood that a car travelling in the opposite direction to the truck went through the cross roads. It is believed the truck attempted to swerve to avoid the oncoming car but tipped the side of it and then ploughed into the school yard.

Nine parents’ cars and two teachers’ cars were damaged in the incident. Gardaí, two fire brigade and at least five tow trucks attended the scene. Concerns about the notorious accident blackspot crossroads were raised at a Community Alert meeting held at the school two years ago.

Just an hour and a half prior to the accident, at noon on Wednesday, the local priest had actually visited the school and said a prayer with the children for the protection of the community.

“I’m not in any way over religious but somebody was looking down on us today,” said Mr Kennelly.

“The children are obviously very shook up. To witness the mayhem that they did and to think what might have been is hard for them but they are resilient,” he added.

This article appeared in the Connacht Tribune, Thursday April 29th.