If a decision is made to proceed with the much needed Claregalway bypass, it will cost a whopping €12 million less than it would have four or five years ago.

Reduced land prices and construction costs means that it would cost almost a half of what would be required during the boom years.

Last week local residents and the business community in Claregalway were given a presentation of the possible routes for the bypass with four possible options being put forward by the consultants.

Locals looked with interest as each of the four options were outlined—two of the proposed routes bypass the village on the right hand side approaching from Tuam and two on the left. 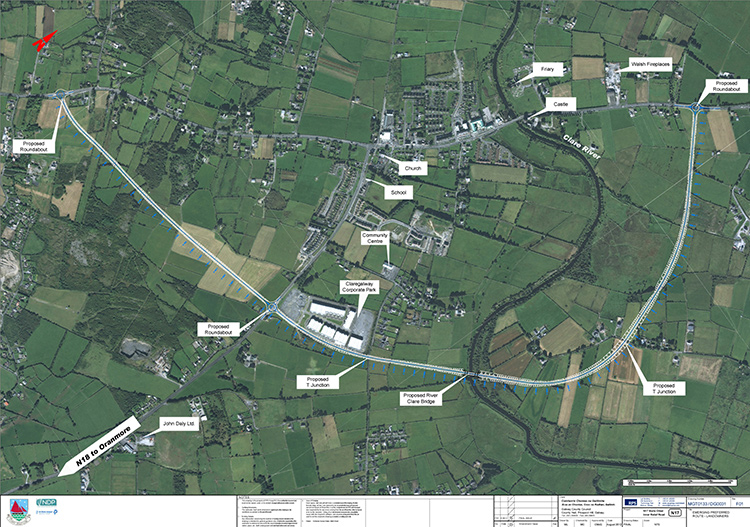 However, it is understood that the route which commences at Kiniska, about half a mile the Tuam side of Claregalway, and rejoins the N17 at Cregboy a half mile the other side (pictured above) is the preferred option.

Galway West TD Noel Grealish said that this route (the blue route on the map) would intersect with the main Claregalway to Oranmore road which meant that Claregalway would be free of this traffic also.

But he pointed out that around five years ago, the cost of building the bypass was in the region of €25 million but now, with land prices having dramatically reduced in the meantime, it would cost in the region of €13 million.

“It makes great economic and practical sense to proceed with this inner relief road and especially as it has been brought so far.

“I know that the Minister for Transport has stated clearly that no new roads project will commence next year, but this should be an exception in view of the fact that it costs relatively little.

“There is so much speculation and uncertainty about the Gort–Tuam Motorway that nobody knows when it is going to start, it if ever will.

“The last Government were boasting about how the M17/M18 motorway would effectively become the Claregalway bypass but they were definitely way off the mark in that regard”, Deputy Grealish added.

Cash strapped Galway County Council have provided the funding for consultants to be appointed to the project so that it can be brought to the compulsory purchase order stage.

Meanwhile, locals and other interested parties have until the end of July to make submissions on the four possible routes that were presented at the public consultation meeting last week.

If the go ahead was given by Government, the compulsory purchase of lands required for the route could take place as early as next September with construction to commence before the end of the year on the five kilometre route.