Around 20 families who were forced out by severe flooding two years ago are expected to get up to €200,000 each to buy new homes.

They were among the worst affected by the floods, which damaged the homes of thousands of people around the country.

They are set to get compensation to buy or build new homes because the risk of their old homes flooding again is considered too great—and it would be too expensive to carry out flood prevention works.

But the 32 families in Galway, Roscommon, Offaly and Tipperary are facing an anxious wait before the Department of Social Protection confirms who is receiving the relocation grants from the €4m fund.

The Government has only approved the relocation of up to 20 families—meaning that 12 other families are likely to miss out on the funds. A number of the families have young children and have been living in rented accommodation since the severe flooding in November 2009. The overwhelming majority are from Galway (27), with three from Roscommon and one each from Offaly and Tipperary.

In order to qualify for re-location, the families have had to get an assessment from the Office of Public Works (OPW) that it is unsustainable to move back to their houses due to the risk of flooding. They have to show that it is impossible to get flood insurance.

And the OPW also has to find that re-location is a cheaper option than carrying out flood protection works. In many cases, families have moved back to their homes because such works have either been carried out or commissioned.

Fine Gael Galway West TD Brian Walsh, who has been in contact with some of the families hoping to get re-located, said it had been a huge ordeal for them.

“But I am hopeful that there is now light at the end of the tunnel for many of these in the form of the prospect of relocation. There isn’t any other option for these people. It’s too risky to move back into their homes,” he said.

The families will be given funds to buy or build new homes—depending on their personal circumstances. But the amount of money they receive from the €4m fund will be capped in accordance with an estimate from their local authority—such as Galway County Council- about the cost of providing a reasonable home in the area. Their re-location grant will be also cut if they have their own site to build on—and any compensation payments from their insurance company for the flood damage will also be discounted.

The Department of Social Protection said its officials had visited each of the 32 families and carried out an assessment of their situation.

“The department expects to be in a position to make a decision on these cases in the coming weeks,” a spokeswoman said.

Although the relocation scheme only covers people in four counties, the Government has given payments worth €1.65m to 1,310 other people to help them move back into their flood-damaged homes—an average of €1,200 each. But according to TDs, many people are still finding it impossible to get flood insurance. 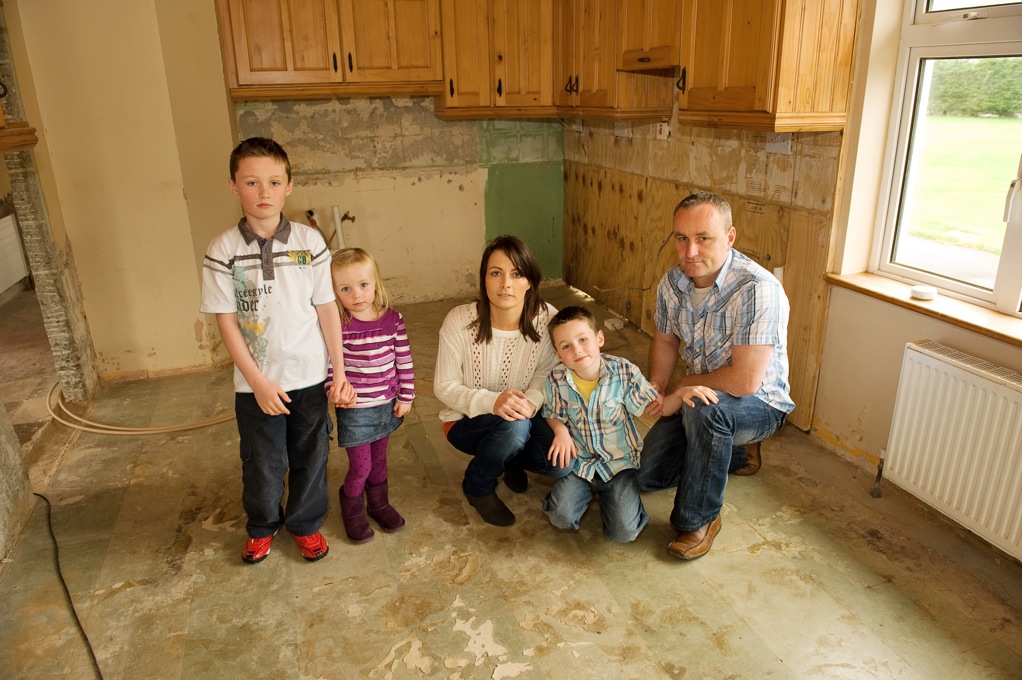 Two years in rented accommodation after the floods

A family are anxiously waiting for a grant to move to a new home—after being forced to live in rented accommodation for the past two years.

Margaret Keogh and her husband Ned lost almost all of their furniture when their bungalow in Carnmore in Galway was covered by a foot of water for three weeks.

They and their three children have been living in rented accommodation while they wait for a decision from the Government on re-locating them to a new home. They had previously lived in their home for ten years and never had any problem with flooding during that time.

Mrs Keogh said the site around the house had been flooded four times since—and that there was no guarantee this wouldn’t happen again if they moved back.

“I just really couldn’t put the kids back there. I would prefer to live in the side of the street rather than go back with them,” she said.

The couple bought their home—which was around 25 years old at the time—back in 2001 for €194,000. Mrs Keogh said it was now “worth nothing” but they are still paying the mortgage for it.

Mrs Keogh said she and her husband had kept going for the sake of their three children Lauren (3), James (6) and Dillon (9).

“If I didn’t have the kids, I think I’d be in a mental hospital because it’s been horrendous on myself and Ned. I don’t even know how our marriage has got through it. We’ve lost everything,” she said.

She and her family are now waiting for the announcement by the Department of Social Protection about who will be re-located under its €4m scheme to help flooded families. Their rent payments are being covered by an emergency flood relief fund in the meantime.

“We’re hearing that 20 families are going to get relocated but we don’t know if we’re one of them,” she said.

Both Mrs Keogh and her husband have lost jobs due to the business slowdown caused by the recession—she previously worked with the Executive Helicopters company and her husband worked as a carpenter. And they had to dump six skip-loads of furniture and personal possessions which had been damaged by the flooding.

“The water was in our house for three weeks. And in the country, you have septic tanks so picture the scene,” she said.

Mrs Keogh said the family is willing to keep repaying has previously travelled up to the Dail to highlight her family’s plight—and has been seeking a meeting with Social Protection Minister Joan Burton.

“It would be just to talk to her and show her we’re not gangsters. We’re just a normal couple and we’re not trying to pull the wool over anyone’s eyes. We owned our own home. We worked to buy all our own stuff. We’ve never been on social welfare until this happened,” she said.