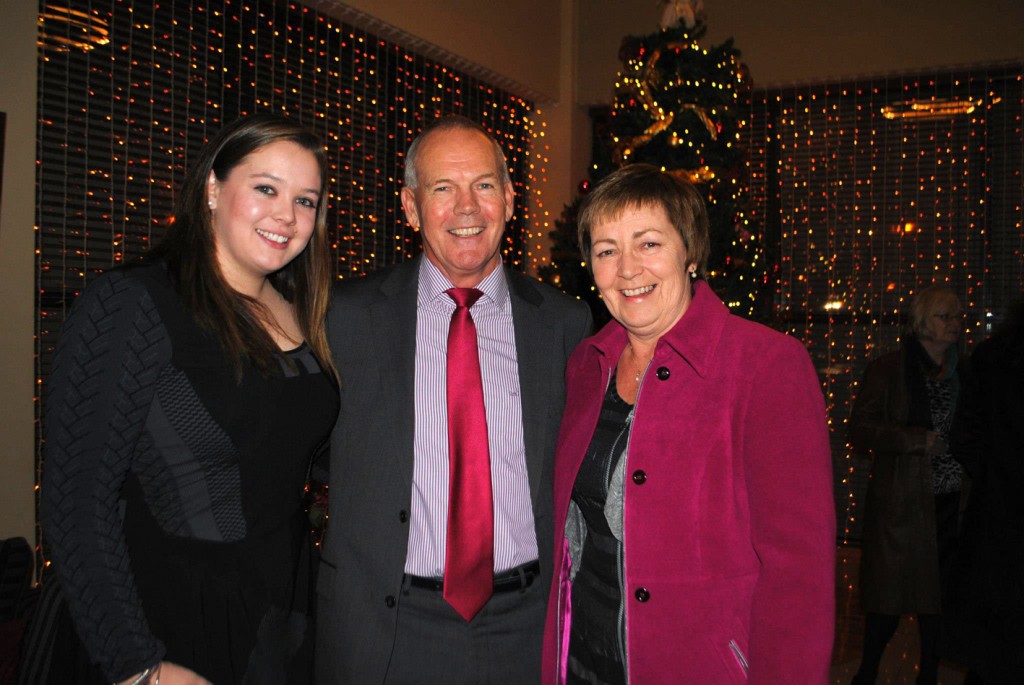 Ann Higgins of Claregalway National School Board of Management said that for over forty years Pat Coen had taught in Dublin, Mervue and Claregalway. “Now that his teaching career has finished Pat will no doubt find a new phase in his life and knowing the active way that he served the pupils of Claregalway, Pat will find many new interests. Evidence of the wonderful imprint that Pat Coen made to the careers of the children that past through his hands could be seen with the endorsements of present and past pupils and parents who watched his hands on approach over many years.

Pat Coen played a major role in the community at Claregalway in that he as a teacher encouraged children of all levels to help to build a community and evidence could be seen that already many of his past pupils were already leaders in Claregalway and other communities. The school played a leading role within the community and the principal was very conscious of that role that had to be played. As principal Pat was conscious of the Catholic ethos of the school and the moral obligations to teach children to have respect, while at the same time advancing a broad education platform”.

Ann Higgins added that Pat Coen’s influence had spread far and wide and thanked him for his guidance. Vice principal Lourda Murphy spoke on behalf of the staff at Claregalway school. Lourda said in the song “The Boston Burglar” it said that twenty one years is a mighty long time, but it didn’t seem long ago since Pat Coen arrived in Claregalway to take up the role of principal on Monday, September 2nd 1991. “Pat immediately endeared himself with the staff and pupils. He was there for staff and pupils at time of brilliant education moments, times of party celebrations and times of tremendous sadness within the school family. When Pat came there were black boards, an old gestetner copier and a tape recorder. Today thanks to the vision of Pat Coen who embraced IT technology aggressively, almost all classrooms have computerised whiteboards, video links and up to date technology. Pat also adopted to the changing face of Claregalway and its hinterland, which now has a multi cultural society in having a school that now caters for a much broader community base that when he arrived in 1991.

During his time at Claregalway Pat Coen developed personal characteristics in the children of the school in teaching them justice, fairness, understanding and respect. Pat always knew how to nurture children to their best and he had a long term influence with all of the children that went trough his hands”. Lourda Murphy concluded that it was a privilege to serve with Pat as he was a teacher, advisor, administrator and friend. She wished his a long life of good health and many happy years of retirement.

Caroline Egan of the Claregalway National School Parents Association said that when a parent sends a child to school they expect a good education and a safe and happy environment for their children. “As this means many different things to different parents, the challenge for the principal is to provide that for everybody. Pat Coen did all that and also provided a sound educational platform and personal development that had all children showing respect within the community”, Caroline added.

Tony Clarke from Claregalway Football Club also spoke highly of Pat Coen. Tony added that while Pat was an excellent footballer himself, he went to make an immense contribution to the development of Claregalway juvenile football club. “He also had a sports environment around him and encouraged other sports most notably athletics. Pat Coen carried out tremendous work for Cumann na mBunscoil over many years at local and national level and during his time in Claregalway and Pat was instrumental in bringing four GAA presidents to Claregalway”.

Various school bodies and community organisations made presentations to Pat Coen in thanks and recognition of wonderful service to the school and to the community.

In replying Pat Coen thanked the many people for their words of appreciation and he praised the various boards of management who had helped him in so many ways over the years. He added that he never had a board of management that said no to anything he wanted for the school and thanked them for being so generous with their time for the school. In particular he singled out Kathleen Dunleavy who gave twenty five years of service and Ann Higgins who had given fifteen years of service. Pat added that he worked with six priests in Claregalway over the years, Canon Gerard Callanan, Canon Noel Mullin, Fr Ian O’Neill, Fr Tommie Marrinan, Fr Sean Kilcoyne and Fr Richie Higgins and during that time he also received their full backing. Pat also thanked and praised the various parents associations for their support and generosity. He was privileged to have many wonderful teachers and he thanked them for their wonderful service adding that he was delighted to see some past pupils join the teaching staff. He also added his thanks to the teachers of Carnmore National School for their co-operation with the various ceremonies where they worked closely together over the years.

Pat said that growing up he was the middle member in the family of eleven and that he had wonderful parents that instilled the values of life into the family. “We were always taught to work hard and honestly, be fair and just and to show respect to others. These are values that I hope are passed on to many children of Claregalway National School”, he added. Pat thanked his wife Margaret, daughter Hannah and son Patrick for their support and especially the people of Claregalway that he came to live with since 1978 and have become such wonderful friends. He wished new principal Carmel Burns the best of luck and with the co-operation of all Claregalway National School can continue to grow as all go forward together.

Pictured is Pat with his wife Margaret and daughter Hannah. For more photos from Pat’s retirement party, visit our Facebook page.