The death has occurred of Martin O’Boyle of Cregboy, Claregalway, Galway.

Reposing at Síoraíocht in the grounds of the Church of the Assumption & St James, Claregalway on this Sunday evening from 5pm with removal at 7pm to adjoining church. 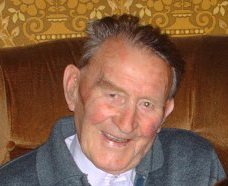 Below is a eulogy written by Aoife and Fiona Dempsey, Mairtín’s granddaughters.

Our lives changed irreversibly at 7:20am on Saturday morning. We had just spent our last night looking after Granda, now it’s his turn to look after us again. This is something he devoted his whole life to and was so exceptionally good at. Granda helped us with our first steps in the world, literally and metaphorically. He was there to hold our tiny hands in his big, safe and always gentle ones.

He taught us to walk, run and cycle and drive—pulling us up when we fell. He nursed our scrapes and cured our bruises with a kiss or a magic plaster from Granda’s Car. He was a rock of comfort and support when we needed him. He fixed and glued our broken toys. There was nothing stickier than Granda’s Glue. It worked on wood, paper, plastic, stone, I’m sure it could have stuck Teflon—but we never tried.

He kept the house he built with his own hands running like clockwork. There was nothing that Granda couldn’t fix and if fixing was simply impossible he modified whatever it was to probably work better than the original. He possibly invented the electric mixer—after seeing Nana toil over beating the sugar and butter in her Christmas cakes he attached a hand beater to the electric drill.

Reading was one of Granda’s passions. He missed this so sorely after he lost his sight completely over a year ago. Granda could turn the most boring story into the most thrilling tale. Granda was constantly being plagued to ‘read a book’ which he never refused—even when my Bobah book had no words and was in fact a Mothercare catalogue. Books were an important thing in our house, each of us, from Mam all the way to Aaron, in turn, was taught to read and instilled with a joy of reading. This joy is now being passed on to the next generation of our family thanks to Surney’s and Ethna’s determination to pass on this skill. There were books on every topic under the sun. If Granda saw a book about a topic he was remotely interested in it was bought and it didn’t matter where in the world he was—many’s the parcel that was posted from Boston, full of books not to mention toys. Whenever Nana & Granda went away we were sure to greeted with a bag of gifts on their return. I am quite sure that their giving us gifts will not cease now, even if these can no longer be material ones.

Family aside Granda was always very interested in the community. The parish of Claregalway played a big part in Granda’s life. He was a member of the first Drama group here. He was one of the founding members of the Gun Club. Anything he did or anything he participated in he gave it his all. This trait he has passed on to each of us. Granda had a keen interest in politics, especially Fianna Fáil. He was active in the development of the Leisure Centre, he was instrumental in its committee and in the many activities associated with it—the fashion shows, the bingo, the agricultural show, the parties and many other events. GAA one of Granda’s keenest interests. From a very young age he was a member of his local teams. Hurling played a big part of his life and his county medal which he won with Claregalway 1952 always held a special place in his heart. He never, however boasted of his involvement and its only after reading reports of this match that we found out the monumental part he played in that match—scoring six goals. He continued to play a part in Claregalway GAA even after he finished playing and always kept abreast of the clubs achievements.

Granda’s working life too was varied. He worked with the Turf Board in the Curragh bogs during the War. He returned to Galway and worked in Higgins’ General Merchants. He worked in Merlin Park Hospital—he was the first ambulance driver there. He then took up a position with the Board of Works where he was foreman for many years. After his retirement he returned to full-time dairy farming. However, what he regarded as his most important job was that of being a devoted husband, father, grandfather and great-grandfather. Granda loved the outdoors; he loved to hear the birds singing and was never so happy as when he was outside surrounded by nature. Granda taught us the names of all the wild birds, especially his robin who he could call to the handle of his spade, and all of the wild flowers. Surney, Ethna and Evin will continue to pass this wealth of knowledge to the next generation in his honour and memory.

Granda meet my Nana while working in Galway and never looked back. They married on the 26th January 1949 and settled in Claregalway. They had one much loved daughter, Marie of whom, they were so very proud. Nana and Granda were blessed in their relationship. They were best friends always and deeply committed to one another. Granda lost Nana in 1997, which was far too soon and this tested him sorely. We can be happy now in the knowledge that they are together again as they were always meant to be. Their example of love and happiness has been invaluable.

Granda had a passion for the Irish language and all things Irish. He grew up speaking Irish and his stories of the old days and the old people were peppered with Irish words. He took every opportunity to foster in us all this love for Irish language and culture. I cannot count the journeys, early in the morning and very late at night to and from the four corners of the country to bring first Mam, and then each of us, to feises each weekend. Granda loved to watch us dance and sat for hours without complaint no matter how cold or uncomfortable the hall! Without his support and encouragement I could not have achieved anything that I have. Granda has always been and will continue to be my inspiration, no matter the trial or test he constantly weathered every storm with a smile. I will pray to him to loan me his strength and his courage.

We would like to thank all the people who helped and minded Granda throughout the years, especially the doctors and nurses and all the staff of St Rita and St Mary’s wards in the hospital. We also extend our best wishes to the other patients and their families that we met during Granda’s long stay in hospital. We will continue to pray for them. We are so grateful and incredibly touched by all of your visits, phone calls, prayers and gestures of love and sympathy. Granda had an undeniable ability to touch the heart and soul of those the met and change their lives for the better. The large numbers who have called to the house and attended this funeral are testament to this. We would like to extend our heartfelt thanks to Tom Lenihan and all of those who organised and participated in the guard of honour on both days of the funeral. It was a cold and wet wait but Granda would have been truly honoured by the tribute.

We would like to extend our thanks to Fr Ian O’Neill PP, Fr Dan O’Connor, Sacred Heart Fathers and Fr Seamus Nohilly, Fr Dan O’Neill and all the SMA fathers for their help and guidance during this most trying time. We deeply appreciate the hard work of the grave diggers and the Funeral Director Frank Kearney. We want to thank Sandra Walsh, Rita Nolan and all members of the choir who reformed for today. Their beautiful singing really added to the liturgy and meant the world to us. We truly appreciated the beautiful food provided to us by the Arches over the past few days.

We are indebted to all of our relations, friends and neighbours and offer our most sincere gratitude for your condolences. Granda’s great-Grandchildren have a message of their own to their Dan-Dan, they want him to know that they love him and miss him and will pray for him and to him forever. We will remember Granda in our every action, forevermore. Each word of Irish, every step on the dance floor, every smile from his great Grandchildren, every birds song, each cup of tea, every star in the sky—he will be with us, minding us as he always has.