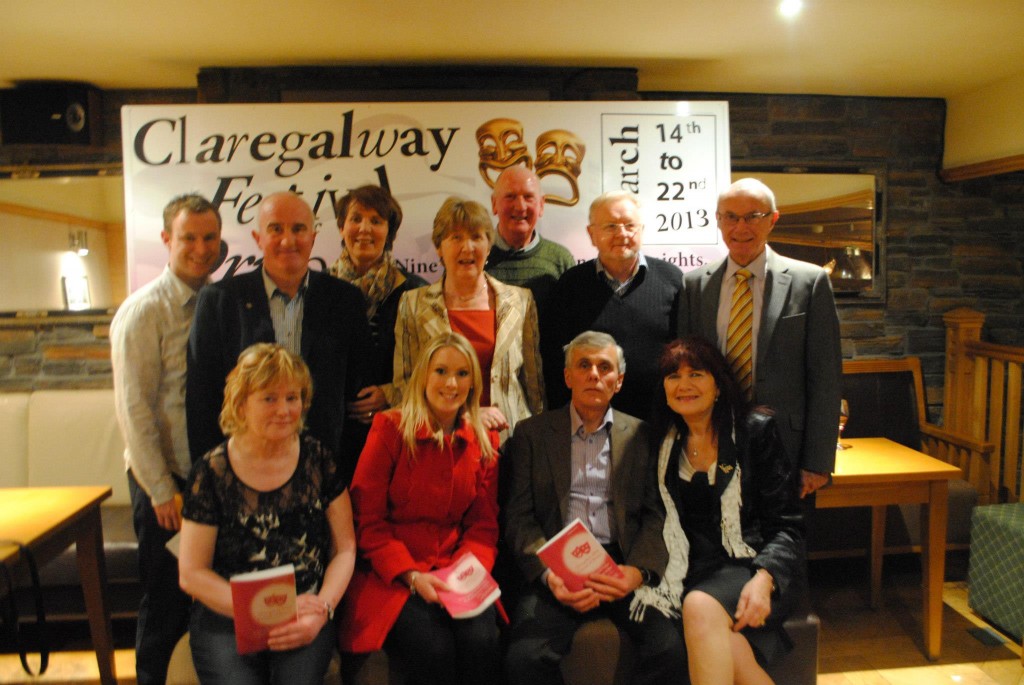 Seamus McNulty paid sincere tribute to the people of Claregalway and in particular the sponsors who repeatedly come on board to help Claregalway Festival of Drama committee continue with their annual Drama Festival. He added that this was the 31st Claregalway Drama Festival and will take place from March 14th to March 22nd 2013 in the Claregalway Leisure Centre. As always the Claregalway Leisure Centre will be turned into a fabulous theatre for the nine nights of drama from some of the top groups in the country. This year the festival committee are fortunate in that there are many productions which have not been played before in Claregalway and that should add to the huge entertainment value that is always provided

It has been a long haul since the first Festival of Drama in Claregalway opened in March 1982 with Demesne Players, Mountbellew staging their production of John B. Keane’s “Many Young Men of Twenty”. Now Claregalway Festival of Drama is recognised as one of the top festivals in the country. Tickets for this year’s festival can be purchased at the door each night. Admission is €10 and €5 for OAPs and season tickets can be purchased for €60 and are available from committee members.

This year the Claregalway Festival of Drama will commence on Thursday, March 14th with local group Compántas Lir stage their production of “The Way You Look Tonight” by Niall Williams. This is a play about the difference between romance and real love, fantasy and reality telling the story of two ballroom dancers and their lives before illness stilled their dancing, as well as the invisible lines of love, dreams and guilt that connect family.

On Friday March 15th, Coolera Drama Group present “The Butterfly of Killybegs” by Brian Foster. A play for adults only set in Donegal during the Swingin’ Sixties, this tells of a mother and daughter trapped in the past, as Mary watches her life ebb away looking after her bedridden conniving mother. When she accepts a marriage proposal, her mother has other plans! A hilarious comedy not to be missed.  On Saturday, 16th, Thurles Drama Group present “All My Sons” by Arthur Miller. Set in America, this tells the story of Joe, a successful business man who approved faulty airplane parts during the war, leading to the death of twenty pilots. Now, as his son is set to marry his business partner’s daughter, who Joe allowed take the blame for the disaster, dark secrets and lies are revealed.

On St Patrick’s Night, Sunday March 17th, Shoestring Theatre preset “Eden” by Eugene O’Brien. This play is also billed as adults only is an enthralling and disconcertingly realistic portrayal of the breakdown of a marriage, told separately through the play’s two characters, and how they deal with the situation in which they find themselves.

On Monday, 18th it is the turn of long time North Galway visitors to return as Glenamaddy Players present “Moment” by Deirdre Kinahan. Fast, witty and frighteningly real, this is the explosive story of trauma wrapped up in table cloths and teacakes. On a seemingly ordinary evening a family sits down to tea, joined by their son recently released from prison. He has some news to share and a conscience to clear, and it will change their lives forever.

On Tuesday, 19th, Corofin Dramatic Society in Clare present “By the Bog of Cats” by Marina Carr. The story of an Irish traveller struggling to come to terms with a lifetime of abandonment, her courageous and outrageous attempts to lay claim to that which is hers and her fight to keep her daughter. This is the story of a woman pushed beyond the limits of human endurance.

On Wednesday, 20th Ballycogley Players present Shakespeare’s “Comedy of Errors”, adapted by Fintan Murphy. William Shakespeare’s story of identical twins, separated at birth, who in adulthood unknowingly come to the same town, which of course leads to hilarious cases of mistaken identity. This adaption frames this play in contemporary times while retaining the witty and lyrical poetry of Shakespeare.

Thursday, 21st is the second last night and features Dunmore Amateur Drama Society – DADS who present “War” by Roddy Doyle. In the ferociously competitive world of the pub quiz, two giants of the quiz lock eyes across an Irish pub, but tonight, can George rally his team to beat the unbeatable Bertie, and bring him to his knees? It’s not just a game, it’s WAR!

Friday 22nd March, Skibbereen Theatre Society will close the 31st Claregalway Festival of Drama when they present “The Hen Night Epiphany” by Jimmy Murphy. Another adults only play as bride to be Una meets with her close family and friends at the run down cottage she plans to renovate with her new husband. The booze flows, the jokes and slagging begin, but all get more than they bargain for with revelation after shocking revelation.