The introduction of free parking in the city centre this November could serve as a blueprint for the roll-out of a more permanent arrangement.

That’s according to city businessman Jimmy Griffin, who this week said that the introduction of the scheme by Galway City Council was a result of “the power of the people” and would be a welcome boon for city businesses.

The local authority is set to waive parking charges in the city centre for a two-hour period between 10am and 12noon from Monday 4th to Friday 29th November, with the loss to the Council estimate at €20,000.

The news follows heated public debate on the issue of parking costs, which was prompted by a complaint posted online by a Griffin’s Bakery customer, who had to pay €4 to park for an hour in the city. Mr Griffin has since lead a campaign, alongside Galway City Business Association, to secure “a break” from such charges for businesses and shoppers.

While the Council has indicated its intention to end the initiative after November to avoid sending “mixed messages” during the Christmas Park & Ride, Mr Griffin believes it is a “blueprint for the future” and revealed that  city centre outlets will be quantifying the impact on sales during the four-week period to bolster an argument for an extension of the scheme.

“The businesses sees this as a chance to shine. It’s an opportunity for for us to make special offers available during this concession and if we can quantify and measure it, which we are all actively engaging to do, we will be able to go back and say ‘between these hours, we were up whatever percentage on this time last year’ because of the obstacle of the cost of parking was removed,” he explained. 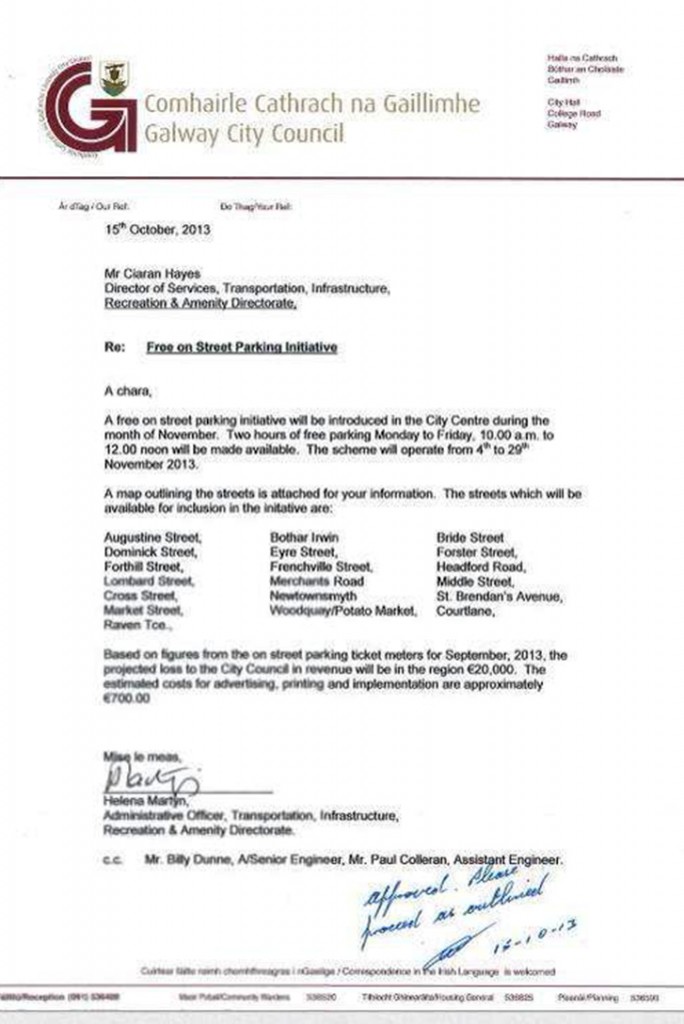 Under the Council initiative, free public parking will be available on 19 streets in the city centre but Mr Griffin revealed that negotiations are underway with private operators for inclusion in the scheme.

While the scheme has been costed by the local authority at €20,000, Mr Griffin said the investment was well warranted given the potential impact on city trade and questioned whether the figure reflected the actual income usually generated by the Council in quieter months such as November.

However, he welcomed the move as “goodwill gesture” from City Hall. “Great credit is due to them for listening to the wishes of the people.”

Having previously vowed to raise parking costs to encourage more sustainable transport options, Director of Services Ciarán Hayes admitted this week that the current strategy is at odds with other Council initiatives.

However, he added that the four-week scheme would be considered a pilot and did not rule out an extension in the future, depending on the success of the venture. “I know Jimmy Griffin’s motive is to get additional shoppers into town so before we could be in a position to consider extending it, we would have to measure how successful it was in achieving that aim. We would have to measure the outcome so it is probably a bit premature to be drawing any conclusions.”