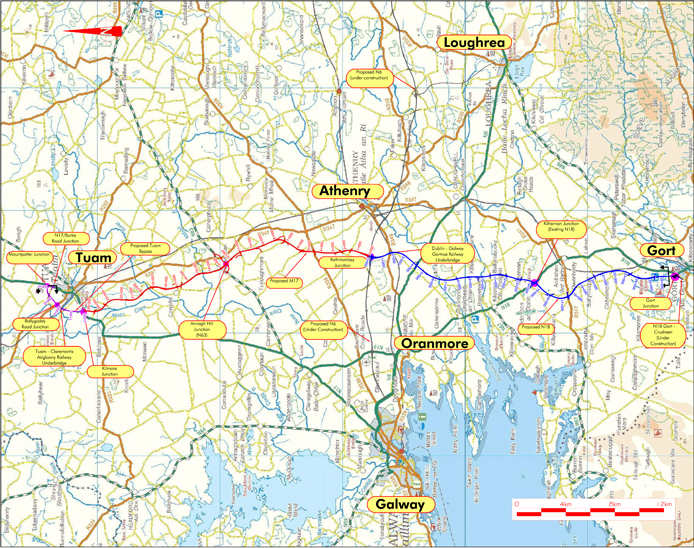 For the first time, the M17-M18 motorway between Tuam and Gort has appeared on a road atlas. The latest edition of the Collins Ireland Road Atlas shows the road as a route under construction.

It was included in a “handy” version with last weekend’s Sunday Times.

Contracts for the motorway are due to to be signed within weeks and a visit to Tuam by high ranking officials involved with the funding is understood to herald this.

A number of personnel from the National Roads Authority (NRA) were among those who visited Tuam to carry out final inspections of the proposed route.

While in Tuam the group met with Cllr Tom McHugh and they have informed him that contracts for this project will be signed before Christmas or in the early days of January 2014. The contractors appointed will commence construction of the new motorway within weeks of the signing and it is projected that the motorway from Tuam to Gort will open in Spring 2016.

This project is a public-private partnership costing approximately €530 million. To date practically all of the land required has been purchased and paid for and all planning permissions are in place. It is understood that the construction cost element of the works is in the region of €350 million, of which €170 million is being provided by the European Investment Bank.

Cllr McHugh says that is is his belief that one member of the group visiting Tuam was a member of the European Investment Bank who obviously wanted to view the location of where this funding is being spent.

The new motorway will be 57 kilometres in length. It will be from the Milltown side of Parsons Garage, Tuam and it will link up with the existing M18 Motorway at Gort. It will have a speed limit of 120 km per hour and it is projected to reduce travelling time between Tuam and Limerick to approximately one hour and Tuam to Dublin one hour and 50 minutes.