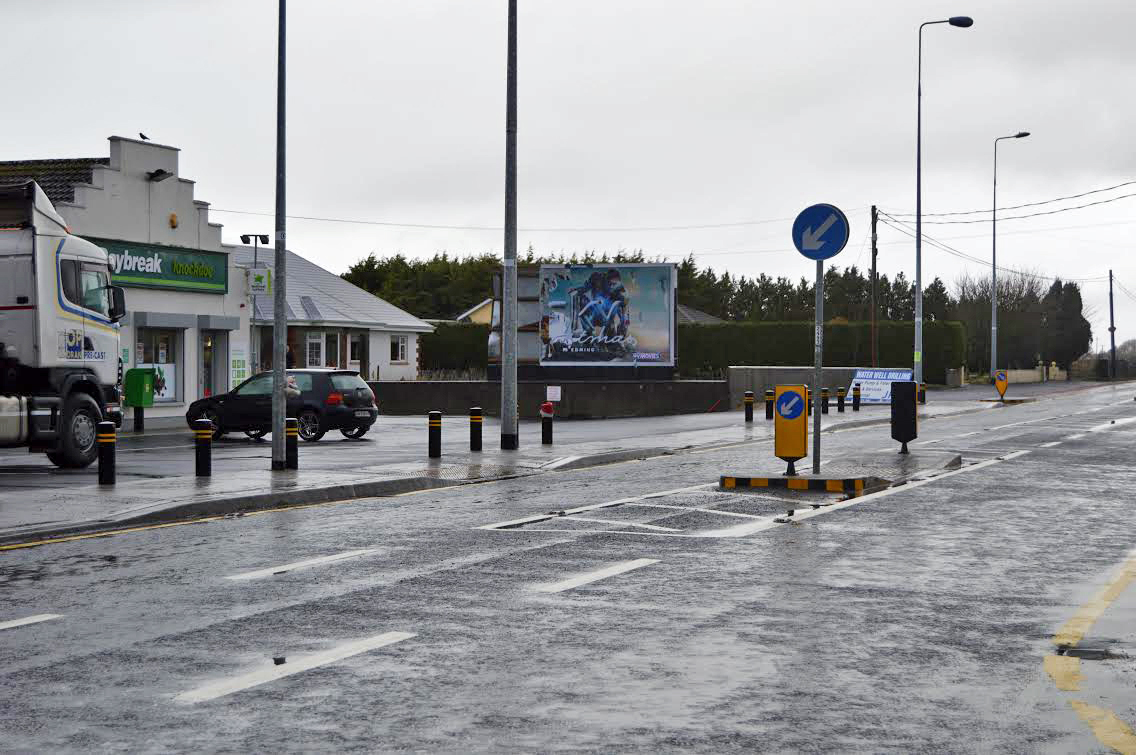 Armed raiders may be casing rural shops days in advance of robberies. The owners of shops, pubs and filling stations, and their neighbours, are being urged by Chief Supt Tom Curley of Galway Garda Station to be on the lookout for anyone acting suspiciously or for any strange vehicles in the vicinity of business premises.

Chief Supt Curley made his comments to The Tuam Herald as investigations continue into the third major robbery at a rural Co Galway business. This time it was at the Daybreak supermarket in Knockdoe (pictured above) on Thursday night.

In a terrifying ordeal, Bríd Everiss, who operates the supermarket with her husband Pat, who was in hospital at the time, was knocked to the ground and hit on the legs a number of times with a crowbar when three men, all wielding crowbars, robbed the premises of cigarettes valued at thousands of euro, cash from the till and other items.

This was the third such robbery at a rural business premises in three weeks and the Galway Chief says the robbery has all the hallmarks of a similar robbery at Duane’s shop and filling station at Kiltullagh, Athenry on February 20th. It may be also linked to a raid at Clancy’s Filling Station, Moylough on February 14th during which cigarettes with an estimated value of €3,500 were taken.

“While we are not definite about the link with the Moylough raid, it is a possibility, and definitely the one at Knockdoe has all the hallmarks of being linked to the robbery at Duane’s premises.

“These people may be casing business premises in advance of robbing them and we are appealing to shop owners, their customers and neighbours everywhere, but especially in rural areas, to be watchful,” says Chief Supt. Curley.

“Those who did the robbery at Knockdoe made off in a dark coloured estate car, possibly a high powered Audi.

“It is also interesting that this robbery and the one at Duane’s shop in Kiltullagh were both carried out on Thursdays while the raid on the Moylough filling station was late on Thursday night or early on a Friday morning,” says the Supt.

“The car used may be parked up in some garage or lane for the rest of the times before being used in robberies. So we also appeal to people to watch out for this and if they are suspicious of any vehicle parked in these circumstances to contact us,” he added.

“We are also urging shop owners to be particularly vigilant especially when they are opening or closing as those are times that robbers may strike. If possible have somebody with them at those times, even a neighbour or friend if there is no other staff or family members available,” says the Garda Chief.

Gardaí have been increasing visits to businesses across the county in an effort to improve crime prevention measures.

“Our crime prevention officer for Galway Sgt Pat Flanagan and other members of the force have been visiting business premises all over Galway to urge the owners to ring us at any time they may be concerned.

“We have increased mobile patrols in most areas. A member can be at the person’s business very quickly after being alerted,” said Chief Supt Curley.

He says those involved in the three recent burglaries may be expecting from within the county or outside and while they are following a number of lines of enquiry they would appreciate any assistance from the public who should contact Galway Gardaí at 091 538 000.

Shortly after nine o’clock on Thursday night three men wearing dark clothing entered the Daybreak shop just as Bríd Everiss had the shutters partially drawn down as she prepared to close the shop.

They had crowbars and after knocking her to the ground and hitting her around the legs and arm, they went to the store room and office at the rear of the shop and started taking cigarettes which had been delivered earlier that day.

“Another member of the group started taking cigarettes from the cabinet behind the counter and they kept asking for the safe but I told them that as we were not a big shop we did not have one. “It was all very terrifying especially when they knocked me to the floor and hit me on the legs and arm. Later they put me into a room at the back of the shop. They went looking for a key to lock the door but when they couldn’t find it they placed a trolley and other goods against the door to obviously delay me getting out,” says Bríd. When she heard a car speeding away and heard no activity in the shop she managed to free herself from the room and raised the alarm.

The thieves disabled the CCTV system before they fled the scene.

She was very shaken by the ordeal and received treatment at the scene. Bríd has since returned to work.

A number of people have already come forward with information on suspicious activity in the vicinity of the Knockdoe shop.

A week earlier, on Thursday February 20th, three men wearing balaclavas and hoodies entered the home of Frank and Mary Duane, who own the filling station and foodstore in Kiltullagh, about three miles from Athenry.

The gang forced a family member to open the safe of the business and are understood to have got away with cash and goods worth over €1,000. They fled in a car in the direction of Ballinasloe.

The robbers kept the family captive for almost an hour and son Anthony received a head injury and injuries to his shoulder during the incident.