Coláiste Bhaile Chláir in Claregalway is leading the way when it comes to integrating mobile technology.

It was selected by Microsoft as a 2014–2015 Microsoft Showcase School for its excellence in transforming its learning environment to deliver more personalised education to students and using technology and cloud technology to better prepare students for success in the workplace.

It is one of over 150 schools from around the world recognised for their efforts to rethink teaching, learning and assessment. 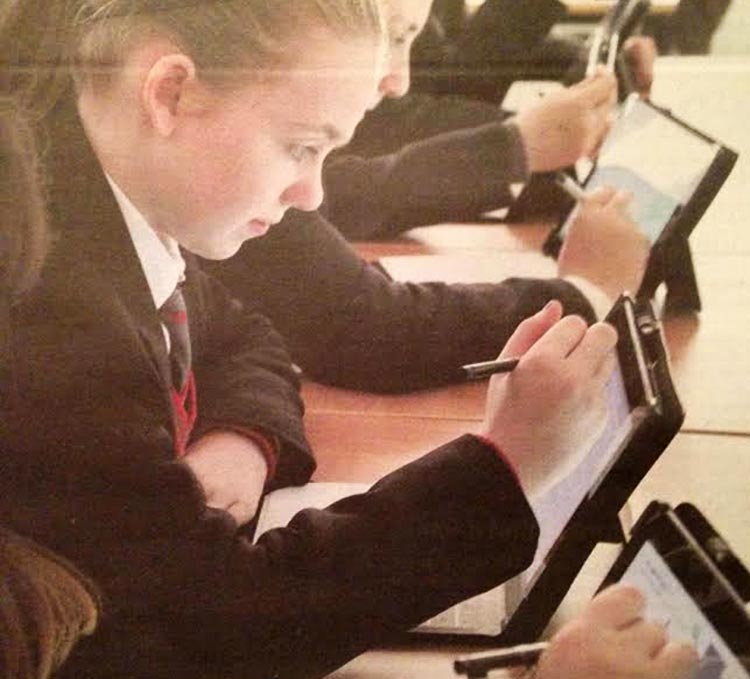 Teachers Lara Dabhagh and Gareth Callan were selected as expert educators, joining a group of 800 teachers worldwide who have been acknowledged for their practice in the classroom.

When it came to deciding to go down the road of new technology before opening the school two years ago, the most important step was working out how it would be used in each class, Principal Alan Mongey recalled.

“I think that’s a mistake a lot of schools make, focusing on whether to buy iPads or Netbooks rather than what they are going to use them for,”he reflected.

Using Microsoft OneNote, teachers create their own content in advance instead of using a traditional text book. In every subject they have the equivalent of a text book but drawn from different resources and kept in a digital binder.

“Students are more organised as they have teachers’ notes, handouts, assignments all in one place. They digitally write in their devices. They are more engaged as they’re using technology they’re more comfortable with.

“We have an online presence. Online 365, which is a kind of a classroom in the cloud, where they put assignments, students can have discussions about homework and can have access to resources they need from home or on the mobile phone.”

Some students still write in copies or can choose to write with a digital pen on their tablets. They can make videos, download pictures for assignments, create charts for projects.

Key to making the project work is teacher training and developing a consistent approach across all subjects. It is imperative to have a number of staff interested in leading it.

“We have members here who are exceptional and do a lot of in-house training which is much better as teachers are more likely to go to a colleague, speak to them in the staffroom, rather than consult an outside expert,” explains Alan.

“There are lots of teachers in schools who have a huge amount of skills, they just need to be drawn out. There’s one or two teachers like this in every staffroom.”

Initially, the switch takes up a lot of time while teachers collate their own content, but then they have it prepared for every future class.

“It is hard work, teachers are very busy but they’re working very hard together.”