After eight years of losing their nest to tides, a pair of swans have successfully hatched five cygnets in Oranmore, thanks to a special man-made floating raft. The raft is a joint project between Conservation Volunteers Galway and Oranmore Tidy Towns and is led by GMIT’s Peter Butler. 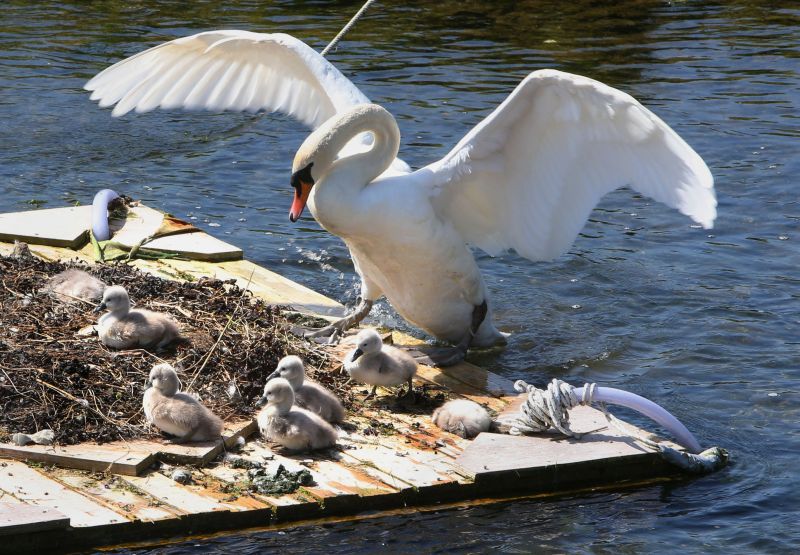 Swan and cygnets on the raft at Oranmore. Photo by Joe O’Shaughnessy via Connacht Tribune.

“I moved to Oranmore last year and this time last year, I noticed the swans building a nest on what used to be a mill race—it’s a sort of small island alongside the bridge,” Peter explains.

Unfortunately, the tide washed that nest away and he was informed by the locals that this had been going on for years.  So he set about researching solutions to the problem.

“The obvious answer was a floating raft that they could nest on. They would be common in the canals in Holland, where the swans nest on them every year.

They also have them in England and Canada on the lakes. But nobody had ever put them into an estuary before and that was the challenge—how we could manage when the tide comes in.”

But when prices quoted for specialised rafts proved too costly, Conservation Volunteers Galway stepped in and offered what they could.

“So I contacted a builder I know and he made it out of pallets locked together in a very rugged, solid frame. I worked out the calculations so that it would float and be stable enough and wouldn’t be too high or too low,” Peter explains.

If the raft floated more than half an inch above the waterline, the cygnets wouldn’t be able to get back on it if they were in the water, he says.

But if it was too low, the waves would come in and wash the nest off. “So it was a very delicate balancing act but it worked perfectly.” 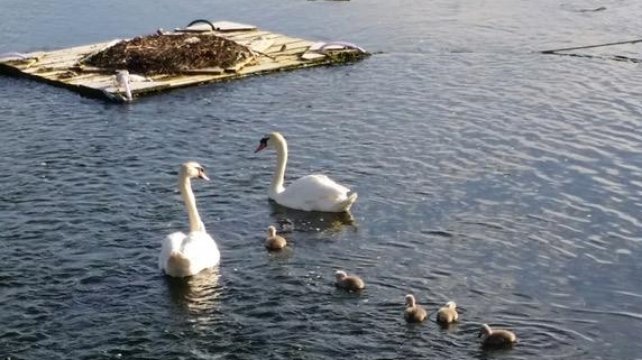 The swans with their five remaining cygnets. Photo via RTE.ie.

Once the raft was finished, eight men couldn’t physically lift it, but it had to be strong to work.  So once it was pushed into the water, Peter and his team lured the swans onto the platform using food.  Thankfully, the swans took the hint and there was a nest of eggs on the platform, located near Tesco in Oranmore village, within weeks.

“Then what we didn’t know was if it was too exposed. The last month was pretty vicious in terms of cold weather and they were desperately trying to keep these eggs warm… And there was just a lot of bad weather thrown at them and we thought maybe it’s just too exposed a location.” 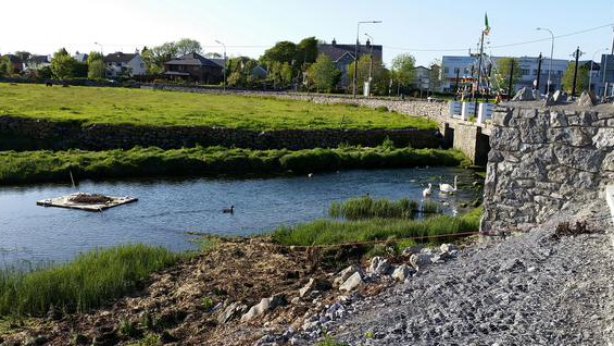 Thanks to the manmade platform, eight out of nine eggs hatched. Sadly only five of the eight cygnets survived, but the local community has taken the long-awaited surviving cygnets to their hearts.

“It has provided a focal point to the estuary. A lot of people walk that area now and have great interest in it,” says Peter of the swans and their new family home.