Despite committing to spending almost €800,000 already, the Department of Transport has abandoned plans to provide an inner relief road for traffic-choked Claregalway.

In a written response the Minister said that he was not in a position to commit any further expenditure to this project—the announcement will come as a major disappointment to local residents.

It is estimated that the provision of a bypass for Claregalway will cost €21 million and the Department are not willing to fund it.

Instead, the emphasis has been placed on to the Gort to Tuam motorway and the potential impact it will have on reducing traffic levels through Claregalway.

Cllr James Charity of Renua Ireland has been informed by Minister Pascal Donohoe that the bypass will not proceed because of financial constraints. 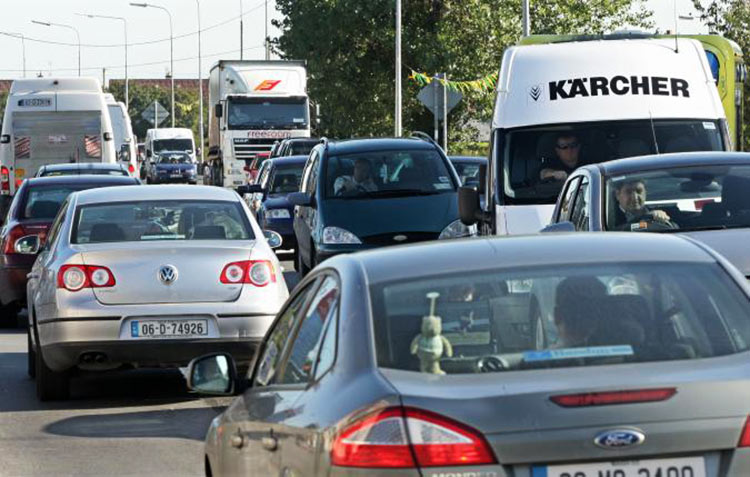 Traffic at a standstill in the village. Photo via Connacht Tribune.

The Minister said that the funding would be better spend on maintaining existing road infrastructure and road improvement projects.

There appears to have been a significant amount of politicking taken place around an issue which is of vital importance for the people of Claregalway and commuters travelling through the village in gridlock on a daily basis.

“On the one hand, we have accusations being made against Fine Gael about alleged hypocrisy on the bypass issue while in opposition and in Government.

“On the other hand, we have a Fine Gael Minister apparently pointing out that during Deputy Grealish’s support of the then Government as a PD and subsequently an independent TD, funding to the local authority was reduced by as much as 27.5%.

“This is tit for tat stuff where it is clear that a blame game is being played about responsibility for the non-progression of the bypass. What is clear is that the bypass was an election issue for numerous years on the platforms of a number of politicians.

“But despite all having stints in Government, it is not proceeding and doesn’t look likely to proceed anytime soon. It is time to stop playing politics with the people of Claregalway and commuters,” Cllr Charity added.