The team behind RTÉ’s acclaimed Second Captains are getting behind the sixth running of a special race that helps raise funds to help a young Galway man who suffered life-changing injuries in a work fall.

That’s because one of the show’s stars, Ciaran Murphy, is a native of Milltown—home parish of Ollie Burke, who is the reason for Run for Ollie in the first place. 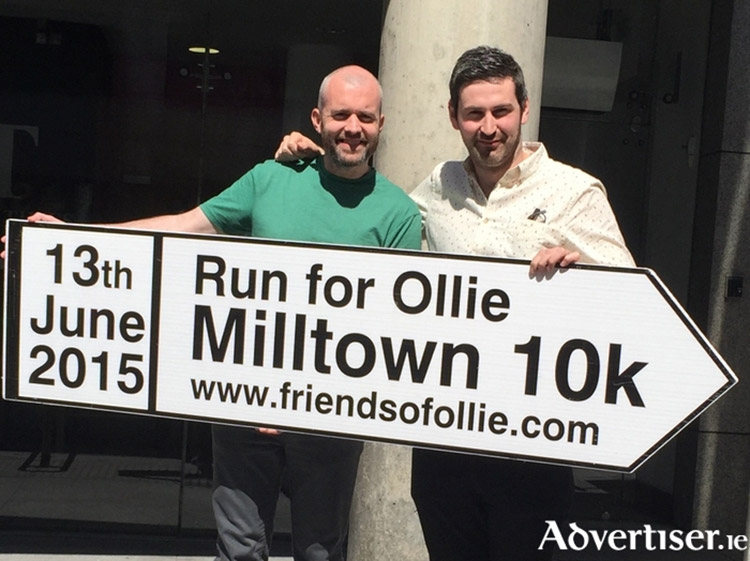 Eoin McDevitt and Ciaran Murphy from RTÉ’s and Irish Times show ‘Second Captains’ pictured at the launch of the ‘Run for Ollie’. Photo via Galway Advertiser.

The sixth annual Run for Ollie 10km run takes place in Milltown on Saturday week, and is organised each year by Ollie’s friends to raise funds for his daily medical care.

And Ciarán Murphy has roped in his fellow Second Captains star Eoin McDevitt to aid the fundraising effort.

“There’s really nothing better than a community standing up and providing for one of its own and for the last six year the Friends of Ollie committee has done amazing fundraising work,” said Ciaran.

“Ollie Burke played Gaelic football for Milltown with my brothers for years. His accident touched us all, and any support is much appreciated—all funds raised go towards providing the 24 hour care Ollie needs all year round. And of course the day of the run is great fun, so I’ll see you in Milltown on June 13th!”, he added.

Ollie, a 38 year old former GAA player, fell from a ladder while carrying out electrical work in 2007. He suffered severe head injuries, which resulted in an acquired brain injury.

Ollie spent sixteen months in hospital, which has left him severly incapacitated and has required 24 hour care ever since.

And every single penny raised from Run for Ollie goes directly on funding his much needed care and ongoing rehabilitation.

“The past five years have been so successful and there has been an unbelievable atmosphere with hundreds of competitors coming to Milltown for the run,” said Ollie’s friend Gerard Bowens.

Ollie lives at homes with his mother and father, and Gerard went on to explain his story.

“Unfortunately, there was no insurance in place to fund Ollie’s care so we need to raise money to look after him. He needs 24 hour supervision and has difficulty doing ordinary tasks.

“He recognises his family but can’t communicate how he feels. Ollie is blind in one eye and has limited use of his left hand. He can walk which is great but he’s unable to leave the house unaccompanied.

“He has also developed serious epilepsy and is prone to regular seizures. It simply goes without saying that we, and Ollie’s family, need all the help we can get”.

With over 600 people—including professional runners, triathlon participants and walkers—taking part in last year’s 10km run, Ollie’s friends are hoping to increase those numbers for this year’s event and are calling for competitors from across the country to sign-up and compete to support this worthy cause.

This year’s charity 10km run will take place on tomorrow week Saturday June 13th at 3pm. Runners and walkers of all ages and abilities are welcome to take part in the event. Entry cost is €30 per person.

Participants can register for this year’s run at RunIreland.com. Registration will also be open at the community centre Milltown on Friday week (6–9pm) or Saturday (11am–2.30pm).

Parking, registration, changing and showering facilities are available at Milltown Community Centre and the local GAA pitch. To view the route map go to FriendsOfOllie.com.