A triumphant Dunmore pensioner has won her battle with her bank to honour a lodgement in an account belonging to her late husband over 40 years ago.

Teresa Scahill, who will be 90 this year, has spent the past two years trying to access the money after finding the receipt when going through old documents at her home in Castle Street. 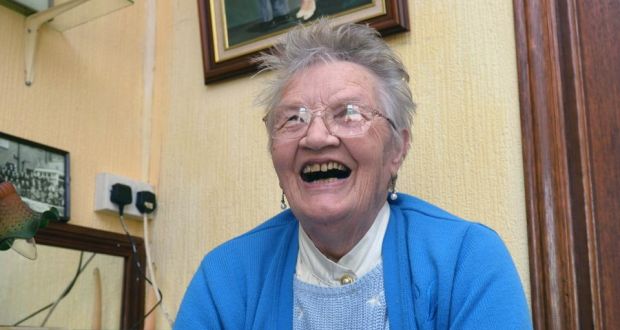 Frustrated with the lack of action from bank officials, she staged a series of protests outside the Ulster Bank in Tuam earlier this month in a bid to force it to honour the €1,000 deposit made by her husband John, who passed away in 1990. “John was diagnosed with a serious heart condition in 1975 and he wanted to put money aside for our sons’ education,” she said.

“When I found the receipt I contacted the bank but they kept fobbing me off. All I had was the receipt, as there was no deposit books back in them days but they kept telling me they had no record of the account.

“I think they thought that because of my age I was talking nonsense but I kept writing to them and told them my patience was running thin. In the end I decided to protest outside the bank in the hope that might get me somewhere.

“The lady who came out to me was lovely and I didn’t hold her responsible, she was only a cog in the wheel, but she wasn’t able to help, other than offering me a chair and a cup of tea. Then a few days after the last protest I got a call from the bank offering me a sum of money.

“It turns out a photograph was taken of me and it went up on Facebook. I was quite cross with my grandnephew who put the picture but in the end that seems to be what made them take notice.”

While Teresa didn’t divulge the final sum, she was happy to have the money, which would go towards her granddaughters’ education.

“This is what the money was intended for and now that I have two granddaughters I will use the money to help them. That is what John wanted and he worked hard for his money so I’m just happy it’s over with and I’ve got what I was entitled to.”