It was a week that the Hession family will never forget as they proudly watched Lorraine achieve a series of personal bests at the Special Olympics World Summer Games in Los Angeles. Lorraine Hession carried the good wishes of her native village Cahernahoon, her parish of Lackagh, her colleagues in Team South Galway and of course Team Ireland, and she let nobody down when she repeatedly broke her own personal best at the Ulytengsu Aquatics Center. In the end there was much to celebrate and while Lorraine lost by just a whisker of securing a bronze medal, she did take the 4th place ribbon for her swim in the AQ 100M Freestyle Division F14 event in the Ulytengsu Aquatics Center. It was a wonderful achievement for the young girl who is youngest daughter of Sonny and Mary Hession of Cahernahoon. 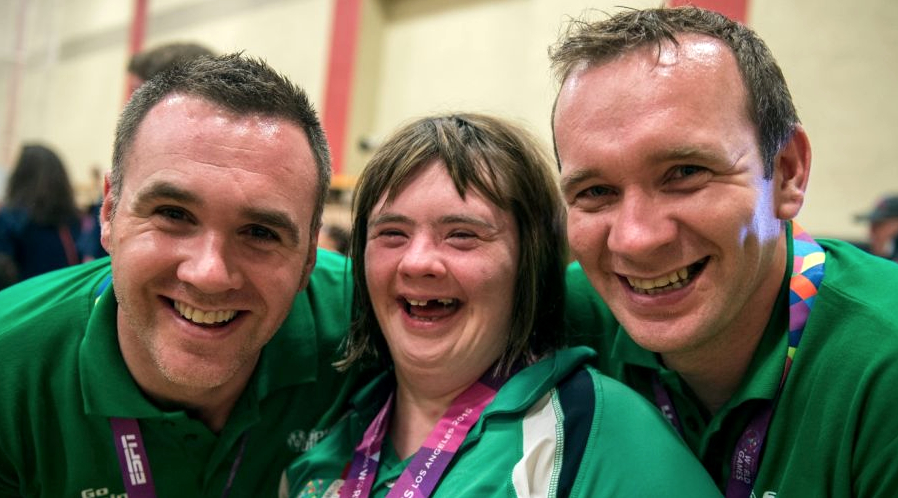 Lorraine Hession, a member of Team South Galway, from Turloughmore, Co Galway, celebrates with her brothers, Paul (L) and Joseph (R), after being presented with her 4th place ribbon for her swim in the AQ 100M Freestyle Division F14 event at the Uytengsu Aquatics Center. Photograph: Ray McManus/Sportsfile via Irish Independent.

Lorraine was joined at the Games by her brothers Joe and Paul, her brother-in-law Rob and many cousins who reside in the United States. The people of Turloughmore and the surrounding areas are very proud of Lorraine and congratulate her on her wonderful achievements.