A massive effort is reaping dividends to save Galway-based children’s charity from shutting down—but it is still a long way from the 50,000 needed to secure its future and continue to provide vital services to families dealing with childhood cancer. Hand-in-Hand, which was established in 2006, gives practical home support to families at a time when they need it most. But it has faced its own battle for survival in the face of a massive shortfall in funding. That forced the charity to go public last week in an effort to save it from closure—and according to the charity’s Service Manager, Jennifer Carpenter, the response has been phenomenal.

“The initial response has been fantastic. We have raised around 30% of the €50,000 we needed, and we hope that the momentum continues, but it’s hard to keep a fire going under these things,” she said this week.

Hand in Hand provides childcare, cleaning, laundry and meal delivery services through local professionals, hoping to give families battling childhood cancer more time with their critically ill children. But this need for donations comes because the charity’s reserves ran extremely low following an expansion of their services across the country. This was due to a high demand for their services outside the  west of Ireland. 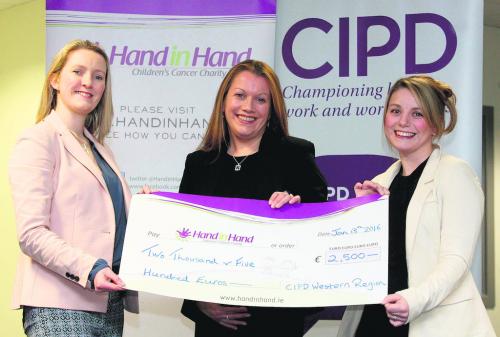 Hand in Hand has assisted over 250 families since it was set up and they continuously support approximately 40 to 50 families per month. That’s according to Jennifer Carpenter, who explained that children’s cancer can often last for extended periods of time.

“Childhood cancer can last years, so we could be with a family for any length of time between six months and five years,” she said.

As the service expanded nationwide, Ms Carpenter said, with regret, that the fundraising didn’t meet up with the demand and so the reserve fund quickly depleted. She believed that the lack of funding coming from donations could be down to the smaller nature of the charity.

“We didn’t have the fame that goes with bigger organisations. Because some of the other charities are multi-million euro organisations, they get more coverage,” she said.

The financial scandals of two years ago within Rehab and The Central Remedial Clinic have damaged charities across the country. More recently, questions over the Irish Cancer Society’s Chief Executive John McCormack’s generous salary have done little to restore public confidence. Ms. Carpenter admitted that this had damaged the public’s perception of charities. However, she said that people continue to be generous in their donations and since it was announced that a lack of funding could mean an end for the children’s charity, there has been an increase in financial support.

“The response so far has been fantastic. We are now not planning to cut services before the end of February,” she said.

“We can’t keep reaching the point where we are going to run out of funding, so the important thing is to keep the momentum going,” she added.

She commended Irish people on being incredibly generous and urged them not to lose faith in charities, despite problems in the past. According to Ms Carpenter, once people know the support provided by charities and the funding structure within them, they can then trust that their donation will go to the people that need it most.

Hand in Hand employs two full-time staff, both on salaries less than €30,000 per annum. Its board of directors is completely voluntary and members claim no expenses.

They also receive no state funding and rely entirely on fundraising to provide their much-needed services. Speaking on Galway Bay FM’s Keith Finnegan Show, volunteer and director Liam Higgins, explained that the HSE had not fulfilled a funding commitment and called on them to do so.

In 2009, a legally binding memorandum of understanding was signed which promised the charity €450,000 in funding, of which they have only received €50,000.

Mr Higgins called on the HSE to meet with the charity’s board to discuss why this funding has not been provided.

The charity endeavours to ‘make sure normality, where normality doesn’t exist, can go on’, he continued.

Hand in Hand has made an application for state funding from the Department of Environment which could cover any salary costs, allowing all the charity’s income to be devoted to services.

However, Ms Carpenter pointed out that there is no guarantee that this funding will be awarded. “As always, there are more applicants than funding available, ” she said.

If you wish to make a donation to Help in Hand, you can visit their website HandinHand.ie or call into the charity shop on Main Street, Oranmore, from which all proceeds go to the charity.