Galway Airport (Aerphort na Gaillimhe) is located at Carnmore 7.4km east of Galway City, and is managed by Corrib Airport Limited. It has not serviced any flights since 31st of October 2011, when Aer Arann ceased commercial operations at the airport. At 1289m (4230 ft), the runway is too short to handle most jet airliners and so scheduled services are restricted to turboprop aircraft or small executive jets. In November 2013 it was announced that the airport’s aviation licence would cease, closing the airport. However, in January 2015, it was announced that the airport would reopen for private and commercial flights at least until May 2015. 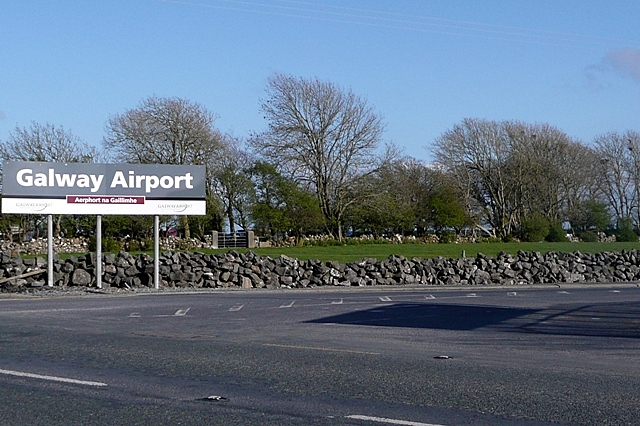 Photo by Graham Horn via Wikipedia.

During World War I a landing ground was built for the RAF at nearby Oranmore. It was later used by Aer Arann, a local flying club and private operators. However it remained a grass strip and was virtually unusable in Winter. Ernest Steiner, a German businessman built his own strip opposite his factory at Carnmore. Aer Arann moved in also and commenced operations from there in 1974.

The runway was extended to 1200 metres and completed on 2nd of March 1987. Although it could accommodate larger aircraft it remained unsuitable for jet airliners and continues to be entirely served by regional turboprop aircraft such as the ATR-42. The first jet arrived at the airport on 30th of March from Ohio USA. It was a 12-seater Gulf-Stream II and many more small business jets used the airport. A terminal and runway lighting was completed by June of that year. In January 1988 Aer Lingus re-introduced the Dublin route, in March Ryanair launched a new route to London Luton and later re-routed it to Stansted. The two airlines went into a business war, Ryanair offering cheap flights direct to London and Aer Lingus to Heathrow, Amsterdam and Paris on selected days via Dublin. In 1991 due to business restructuring Ryanair withdrew their London service and Aer Lingus were soon to follow.

In 1994 Aer Arann began the Dublin route supported by the state funded Public Service Obligation scheme. The route operated three times daily until state funding was withdrawn in 2011 and the airline ceased services on the route. In September 2001 they launched a service to London Luton and the load factor by 2003 was at 73%. The one millionth passenger passed through the airport in April 2002. The airport was gaining popularity and in 2003 Aer Arann launched two more routes to Manchester and Edinburgh with two further routes to Birmingham and Lorient launched in 2004.

By 2007 Galway was officially the fastest growing airport in Ireland, fast exceeding international airports with passenger growth at 63% per annum at that time. Sixteen destinations were served directly, Bristol, Cardiff, Cork, Dublin, Edinburgh, Leeds Bradford, London Luton, Lorient, Manchester, Newcastle, Belfast City, Birmingham, Southampton, Bordeaux, Faro and Malaga. That year saw a record 309,000 passengers use the airport. The 2 millionth passenger also passed through that year. Aer Arann added a service to Amsterdam in 2008 which operated via Waterford Airport but was discontinued after a short period. In 2010 Manx2 added two services—Belfast International and Cork. These services were withdrawn in 2011.

An additional Development Fee of €10 is charged to all departing passengers aged 12 years and over. Manx2 cancelled its seasonal summer service to Belfast City in April 2011.

In February 2012, workers at the airport staged a sit-in in protest at the risk that their redundancy payments might not materialise after the airport’s bankers had seized its working capital.

In January 2015 Galway Airport has reopened to commercial flights. The first commercial jet, under the new licence, arrived on the 13th January 2015 from Stuttgart in Germany. The airport has obtained a new aviation licence, and a fuel licence recently, from the IAA. The Irish Air Corps have carried out an audit of the facility, and the Coastguard search and rescue Helicopter operations staff have also visited the facility to carry out their own audit. The airport is being operated under licence from Galway County Council until May 2015 by Carnmore Aviation Ltd, a company owned by the Conneely Group in Ballinasloe. The Group also own Weston Airport and staff will be shared between the airports. “It is only a small step but great to have commercial aviation back at Galway Airport.” The Councils have selected the consultant who will be undertaking a feasibility study over the coming months. Their brief is to look at the future use of the airport to maximise the economic development of Galway and the region.