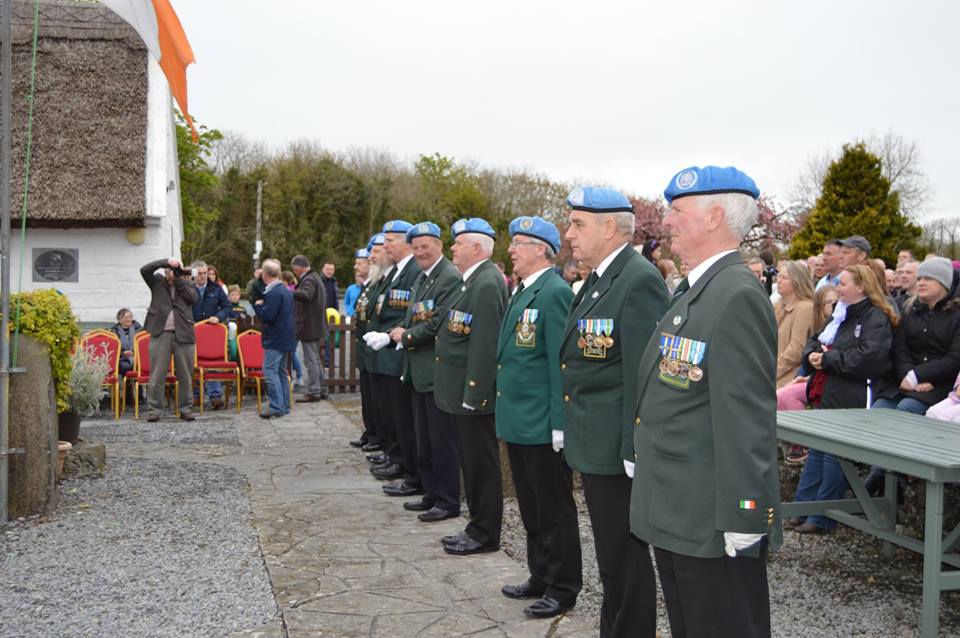 There was a huge turnout for the 1916 commemoration at Lackagh on Sunday morning. Cathaoirleach of Galway County Council Peter Roche paid tribute to the community for honouring the men who gave Ireland its freedom. He added that the present population are only now beginning to understand the heroic efforts that the people before us gave in the fight for Irish freedom. Members from the United Nations Veterans 30 at Liam Mellows Barracks, Galway presided over the flag raising ceremony and the reading of the proclamation.

Turloughmore area had a proud record of the challenge against the Crown that eventually led to Ireland’s Independence. Following the Coercion Act of 1881 Lackagh native Patrick Kearney was sent to Kilmainham Jail along with many others that included John Dillon MP and PW Nally after whom the Nally Stand in Croke Park was named. In the 1880s there was a very strong branch of the Irish National League in Lackagh at which during one of these meetings in 1886 Turloughmore GAA Club was founded.

Patrick Murray led a very strong republican branch of the GAA in Turloughmore and there was always a strong RIC presence at matches in Turloughmore. In 1915 there was a very strong divide between the Peelers and the Republicans that led to the arrest of a group that included Patrick Murray, Stephen Joyce, Mike Burke, Peter Creaven, Dick Joyce, John McDonagh. In 1916 Miko Kyne of Kiltrogue was a main leader of the Volunteers in Claregalway. In 1918 the republican group out foxed the peelers on a day that they came in force to arrest people in Turloughmore.

By then the Republican branch in the area was strong after the arrival of the Black and Tans. John O’Hanlon who had at that stage succeeded his father as secretary of Sinn Fein was a target to be taken out.

On several occasions people of the area had to go on the run and there were a number of safe houses that were also frequently raided or shot at by the Tans. In 1920 the Crown Forces eventually took out John O’Hanlon who was the only casualty of the War of Independence to lose his life in the parish. William Cullinane from Cahernashilleeney was a young clerical student who was caught in cross fire on his way back to All Hallows College from Croke Park. Both are buried in Lackagh cemetery.

The day started with Hurling Matches in Turloughmore GAA grounds after which the Church of Our Lady of Knock was packed as Mass was celebrated to remember all who lost their lives in the fight for Irish freedom. Lackagh taste of Trad Music and Dancers provided the entertainment. Tours, Interactive Displays, Bog Oak Displays, Traditional Food and Children’s Art Exhibition and a CD launch, making the Lackagh 1916 Commemoration a day to cherish.

For more photos from the event check out our album on Facebook here.