There was widespread sadness as the news spread of the passing of Betty Qualter of Lackagh. Betty and her husband PJ came to live in Lackagh in the seventies and both quickly became involved in the community life of the parish. PJ who was a vital cog in Turloughmore hurling club during the sixties, returned to his native parish and quickly got involved in the promotion of Juvenile hurling and ran the card drive for Turloughmore Board na nÓg for many years.

Betty would frequently join him as she loved the game of cards and she became the main inspiration in setting up Turloughmore Bridge Club with Tony Mannion which became one of the leading bridge clubs in the county for many years.

Betty was the driving force in the club and she also became hugely involved in the setting up of a branch of the Society of St Vincent de Paul in the parish which very quietly provided much assistance for many people in need within the community. It was work that never hit any headlines or publicity but Betty and others provided tremendous support in a very confidential manner to many families during difficult times.

Betty was an outgoing person who loved to mix with people and her involvement in golf gave her much satisfaction in life. Betty would spend hours on the golf course and encouraged others to also play the game. She would often bring her nephew to the course and had him enrolled even before he was old enough to be allowed and he has now gone on to develop a professional career around the game.

Betty was always a huge encouragement to her family and when Betty and PJ were hit with a devastating blow in the late 90s with the death of their only daughter at the age of 24, it rocked the family.

However over time and with the support of friends Betty continued on with life and golf helped her overcome her personal tragedy. Betty loved going out and the regular game of cards provided many nights of fun and laughter.

The news of Betty’s illness shocked the community and last week she lost her battle after just a few short months.

Her remains were removed from Lackagh Mortuary Chapel to the Church of Our Lady of Knock, Lackagh and following concelebrated Requiem Mass were Fr Fintan Monahan was joined by Fr John Dunleavy and Fr Gussie O’Brien, burial took place in Lackagh cemetery. 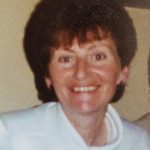