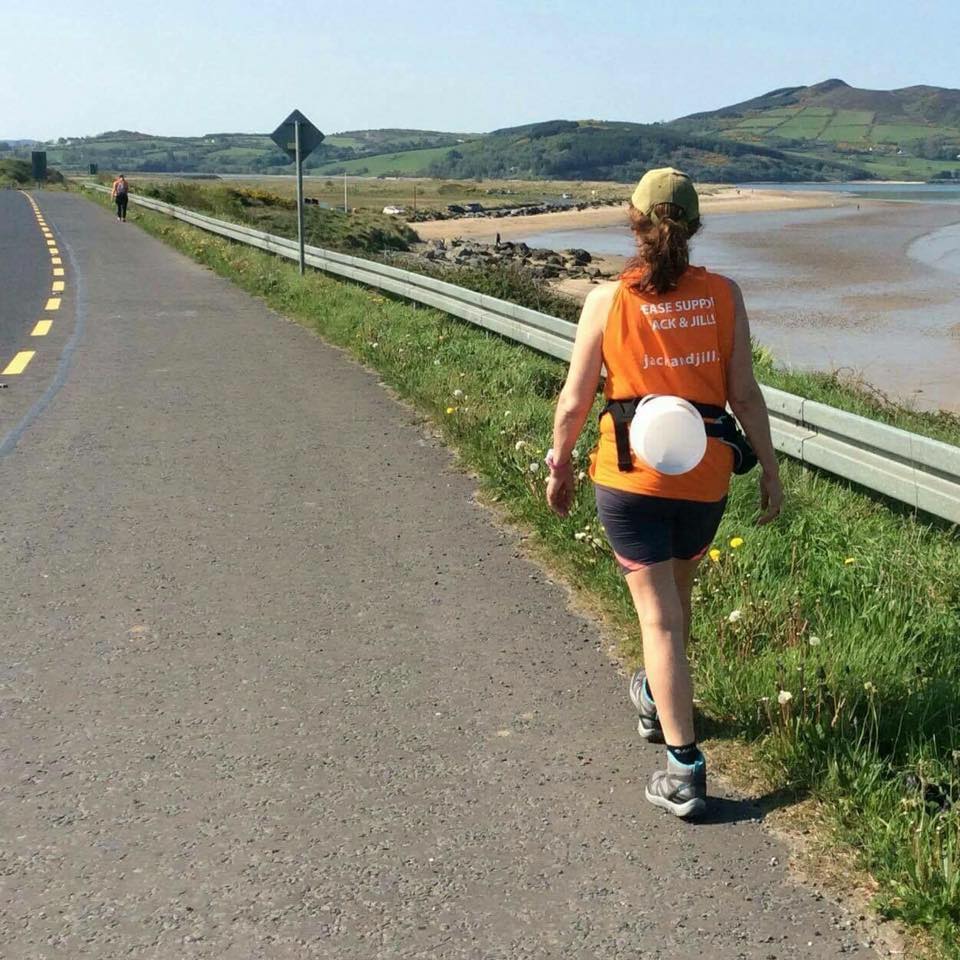 Claregalway woman Eileen Crowe Lynch is on the homestretch of her epic 1,500m walk along the length of the Wild Atlantic Way, with plans to finish up with a final leg from Spiddal to Carnmore this Sunday.

Speaking at the end of an eight-hour jaunt between Leenane to Louisburg on Tuesday, Eileen was optimistic about matching her €10,000 target for the Jack and Jill Foundation by the time she peels off the blister pads and well-worn walking boots.

“I’ve nearly €6,000 in the bank and I’ve still sponsorship cards to come in. So I’m hoping to give out my route on the radio every morning so that people will watch out for me and the buckets,” she enthused.

Blessed with stunning weather throughout, the only day of real rain was on the day she was ordered to rest by a doctor because of an infection on her toes due to overdoing it.

“My feet were very bad after the first week as I was clocking up 50km a day which I just couldn’t keep up. I had blisters, the skin was coming off and I had to take anti-inflammatories and antibiotics. I’ve had a niggling ankle pain but it hasn’t stopped me.” she recalled.

“I climbed Croagh Patrick yesterday. I just couldn’t pass it by as it was where all this started when I climbed it four times last year—I said I’d do it one more time for luck.”

The hardest slog throughout was a section between Ballysadare and Enniscrone in Co Sligo. It was a narrow road with lots of traffic and there was very little recognition of her challenge.

Among the many high points was a reception in the tiny village of Ardara in Donegal when the entire school came out to cheer her on; there was also the amazing reaction she received in Belmullet from entirely enthusiastic locals.

Last Saturday she was joined on the the Great Western Greenway by a busload of 25 family members, friends and neighbours from Galway, including her boss and main sponsor, Liam Glynn from Glynn’s Centra in Carnmore.

“I’ve only had to pay three nights out of 27. I’ve stayed in every type of accommodation, from small houses to mansions—as well as four hotels. A lot of people had been supported by Jack and Jill and wanted to give something back.”

She kicked off the so-called Walk on the Wild Side in Malin Head on May 12th. Scenery wise, her absolute favourite place so far was Fanad Head. Yet, at the same time, the most challenging county was Donegal, with its multiple hills to scale.

As well as free accommodation, she has been treated to a physiotherapy session and a succession of free meals and teas.

the 53-year old mother of three is using her ear’s holidays to undergo the challenge, which will raise money for the charity which has helped her niece, Kierra Adams Kelly from Loughrea, care for severely disabled son Alister at home for several years.

Alister even joined the walk for a spell, which provided his great-aunt with a timely boost.

“I’ve had some long, lonely stretches but I can’t really say at any point I was going to give up. I’m enjoying the scenery and the smells, things you’d normally not take notice of. Your mind wanders, you think of things you wouldn’t have time to think of normally,” she explains.

“People have just been fantastic. I look forward to a rest but the whole experience is something I could never relive again. When you’re walking in beautiful scenery, it’s not an effort.

Donations can be made through her Facebook page—Walk On The Wild Side for Jack and Jill.