The founder of a children’s charity travelled west on a day trip last week—to accept donations from fundraisers inspired by their work in a very personal way. 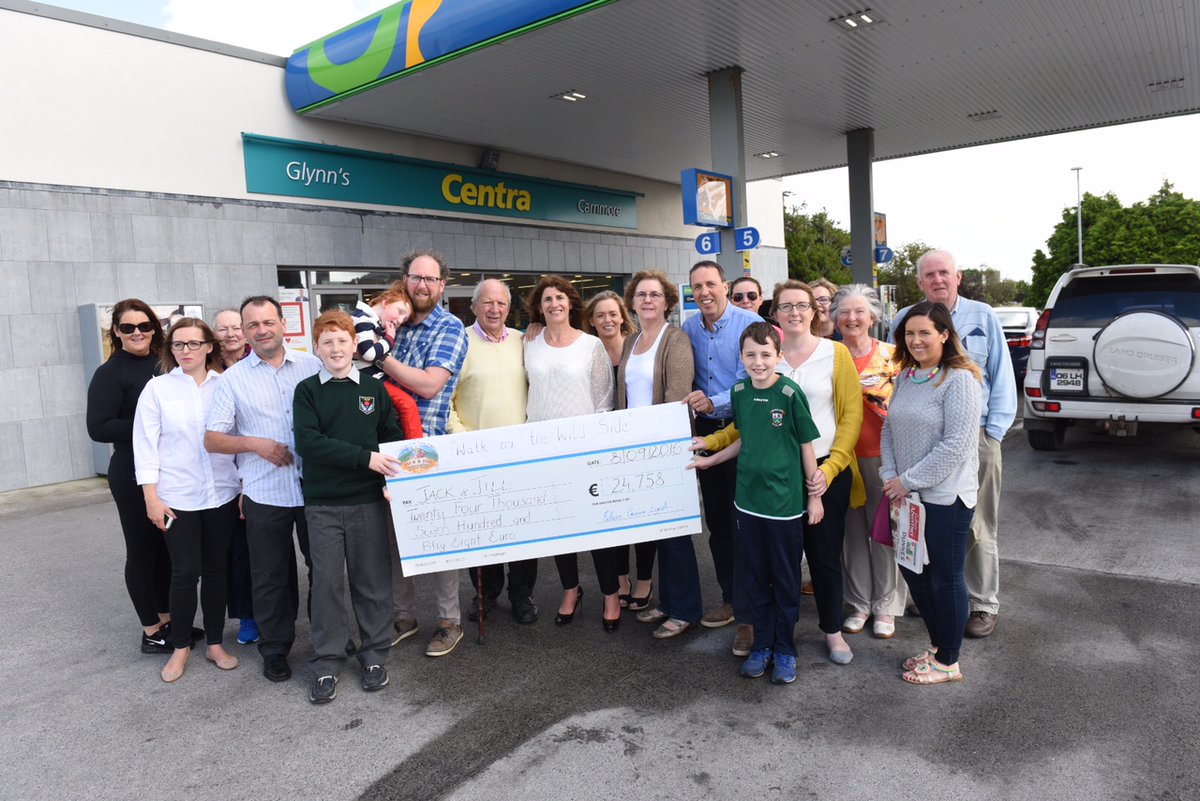 Jack & Jill CEO Jonathan Irwin was joined by the charity’s liaison nurse Cathy Keighery as they stopped off to meet Eileen Crowe Lynch at her place of work, Glynn’s Centra in Carnmore, to receive a cheque for €24,758.

Eileen embarked on her 1,500 kilometre Walk on the Wild Side for Jack & Jill after she was inspired by the charity’s work with her own niece Kierra’s son Alister, who is one of 20 children in Galway currently receiving support from Jack & Jill.

“Jack & Jill means to much to our family based on the support they’ve given to my niece Kierra’s son Alister. After eleven months in hospital for Alister; the Jack & Jill specialist children’s nurses were able to give his parents the confidence and support to care for him at home and they’ve been a real lifeline to the family,” she added.

Little Alister requires 24/7 care and along with his many medical needs he is also prone to seizures which can occur at any time.

Therefore, he must be cared for by a medically trained person at all times and both his parents have been taught how to cope with most of his needs.

“Unfortunately, for that reason, it is not possible for any of Alister’s extended family to care for him for any period of time,” explained Eileen as she set off on her walk from Malin Head to Galway in May.

“That support provided by Jack & Jill for Alister allows the family the basic things we all take for granted like watching their other sons play a match, watch a movie, or escape for a cup of coffee of just catch up with the housework,” she added.

Noel Gibbons, who works at Glan Agua in Loughrea, was similarly inspired after he saw what Jack & Jill did for his own employer’s daughter.

Karl and Alison Zimmerer’s child Alice Rose was supported by Jack & Jill until she passed away—and Noel repaid a slice of that by raising €7,535 with a two-day Charity Cycle from Boyle to Killarney with 25 participants. Both Karl and Alison joined Noel as he handed over the proceeds to Jonathan and Cathy last week.

Jack & Jill supports 20 children in Galway today, having supported 136 children across the county since 1997, and over 2,000 sick children nationwide.

“These wonderful fundraisers are the salt of the earth, and the people who’ve kept this children’s charity going for nearly 20 years,” said Jonathan Irwin.

“Jack & Jill simply wouldn’t exist without the kindness of families and friends up and down the country who give us that push up the fundraising hill every year.”

“This has been another tough year with one charity scandal after another, each one denting the trust and confidence of the whole charity sector. That’s why it’s so important for charities, like ours to show where exactly the money goes and every €16 donated to Jack & Jill funds one hour of home nursing care and respite for families,” he added.

The Jack & Jill Children’s Foundation has to raise €3 million every year to fund its unique home nursing care and respite service which is provided to sick children, from birth to four years of age, around the country.

Typically, these are sick children who suffer from severe development delay as a result of brain damage, who may not be able to walk or talk, are tube fed, oxygen dependent and in need of around the clock care.

The Jack & Jill service operates 365 days a year, has no waiting list and mobilises an army of 1,000 nurses and carers around the country and has done so for nearly 20 years. And with less than 20% of its budget coming from the HSE, the charity relies on fundraisers like this to keep going.