THE traffic bottlenecks encountered by motorists coming in and out of Galway on a daily basis have proven to be a godsend for one business – which is now transporting thousands of additional passengers by bus.

Passenger numbers travelling between Tuam and Galway cit on Burkes Buses have increased by ten per cent in the past year alone.

And it is all down to workers and students tired of being trapped in traffic every morning and evening on the approaches to the city.

Pat Burke says that they are now accommodating more than 2,000 passenger journeys per day.

That has led him to call for a long awaited bus lane to be provided from the Parkmore turn to the Tuam Road lights which he said would further cut journey times by 15 to 20 minutes.

It is also understood that a bus service from the Mountbellew direction travelling on the N63 has gone from being half full to now operating two and three buses along the route.

“The biggest increase in numbers has been on the early service that operates before 8am each morning; there have been increased demands for additional services at this time.

“There is no doubt that the situation in Claregalway and the growing traffic chaos in the city is responsible for the increased numbers using our service,” said Pat Burke, as he confirmed that the company were now employing more than 20 between drivers, mechanics and other administrative staff.

With regard to the city traffic, Mr. Burke said that when works were being carried out at Lough Atalia last year, there was one-way traffic on both lanes out Roster Street and College Road and it resulted in ‘escaping’ from Galway much quicker.

He brought this to the attention of the city authorities – but nothing was done. 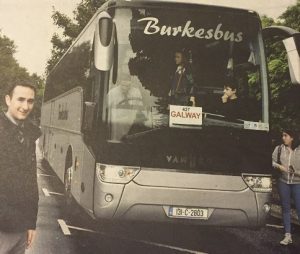